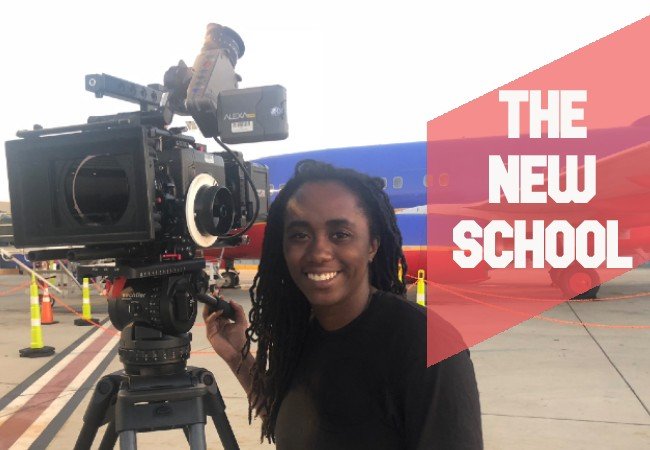 Welcome to The New School, a new series highlighting striking, rising talents coming out of top film schools. We’re thrilled to start with this profile of “Blackbird” writer-director Nicole L. Thompson, a graduate of USC.

“Blackbird,” Nicole L. Thompson’s USC thesis film, is about a young woman who works her way from cleaning planes to becoming a pilot. Thompson was inspired by her own grandmother, who cleaned planes so that Thompson could achieve her dreams.

“We made it this far based on the people who paved the way for us,” Thompson told MovieMaker. “I feel like I was born to tell this story to pay homage.”

Thompson is currently working with a producing partner on a feature version of the film and is developing another feature, To Vegas With Love, about a couple, shunned by their families, who head to Las Vegas to get married.

Thompson, who graduated with her MFA in film from USC last year, has wanted to be a filmmaker since she was 13, growing up in Newark, New Jersey. Her grandmother cleaned planes at Newark International Airport.

“I wanted to showcase that if we work at it, we can achieve anything we put our mind to,” Thompson said, “I have a heart for telling films that are about underdogs.”

She found herself in an underdog position herself when she tried to get access to airplanes to shoot “Blackbird.”

Since several scenes in the film take place in an airplane, Thompson says she called every airport in the Los Angeles area in search of access. She finally received permission from Long Beach Airport to film on the runway as planes took off. She also got permission to film a cockpit scene on a stage at Silver Dream Factory, an Anaheim campus that includes several standing sets, and filmed several scenes at Tomorrow’s Aeronautical Museum in Compton.

Here is the trailer for “Blackbird,” written and directed by Nicole L. Thompson:

The film won Best Screenplay at the Newark International Film Festival, where it was also nominated for Best Director, and was an official selection of the Lift-Off Sessions at Pinwood Studios and African American Film Marketplace. It also kicked off the Women In Media – Newark 2020 Film Festival.

While attending The College of New Jersey, Thompson interned with NBC Universal and CNN’s Chicagoland, commuting into New York City. She also studied filmmaking at Northumbria University in Newcastle Upon Tyne, England.

After graduating from college in 2014, Thompson moved to Los Angeles, where she worked at SAG-AFTRA, progressing from in-house cinematographer to a creative director and producer.

Thompson has also worked as a cinematographer for Kyrie Irving, created her animated film Between the Pages during the DB Frieze LA Film Fellowship, and shadowed her mentor, Fruitvale Station and Sorry to Bother You producer Nina Yang Bongiovi, on the set of her upcoming release Passing.

Thompson was president of the African-American Cinema Society at USC, a society founded by Boyz n the Hood director John Singleton. When she graduated and started working freelance, she craved a similar sense of community, and as a result founded the Black Film Alliance based in Los Angeles.

“It was an opportunity for me to share the resources that I have with other filmmakers who have no idea what’s out there,” Thompson said. The Black Film Alliance serves as a “central hub” where filmmakers can connect, share resources and promote events, she said.

Thompson noted that the alliance can also serve filmmakers who have not felt a sense of community in school. “Anyone who has a desire to make films, there’s community for that,” she noted.

Tesla: Ethan Hawke and Michael Almereyda Reunite for Another Story of a Man Out of Time
Jim Cummings on How to ‘Become Yorgos Lanthimos From Your Garage’