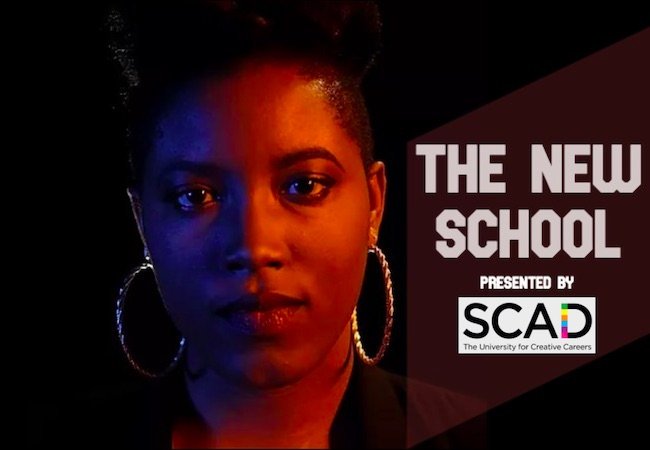 Mahalia Latortue went in a daring direction for her student film “Chocolate Thunder”: She made a comedy.

“One of the things that I really wanted to do for my thesis film was a comedy, because in film school, everybody likes to do something really dark, like a tortured-artist type thing. And I was like, I just want to make people laugh,” says Latortue, who just completed her M.F.A. in film and television from SCAD Atlanta, where she was named Excelsus Laureate at commencement.

She jokes that when she was growing up in the ’90s in West Hempstead, N.Y., her mother said her career choices were doctor, lawyer and engineer. She wasn’t allowed to watch much TV as a child — but did get to watch a little bit of The Fresh Prince of Bel Air and plenty of Family Matters. They helped inspire “Chocolate Thunder.”

“I was always allowed to watch Steve Urkel because it was my grandma’s favorite show,” she says. “I just kind of thought to myself, ‘What if Steve Urkel possessed all of Will Smith’s charisma, and charm, but he could only do it online? What would that story look like? And how crazy would that get? And of course, being Haitian, I thought, what if he was also a Haitian kid on top of that?”

Set in an idealized late ’90s, the short film stars a very charming Zachary Connor as Junior Grand-Pierre, a nerd who adopts a cool online persona, “Chocolate Thunder,” who mesmerizes his high school. Junior wears the flip-up sunglasses popularized by Kadeem Hardison as Dwayne Wayne on A Different World, one of the other shows Latortue was allowed to watch as a child.

“My parents and my family wanted me to have the idea that there’s more than one way of black families existing,” she says.

Latortue pulled from her own teenage experience to write a character who is straitlaced in real life, but adopts a different personality behind the keyboard. She started out writing fan fiction on Tumblr, but soon stumbled onto a sizable online audience of people who would pay her to write sexy stories about their favorite fictional characters.

“This is something so embarrassing that I hate talking about. But I would write like… smut for Supernatural or Doctor Who, or anything like that,” she laughs. “They would send me commissions. They’d literally like send me a logline of, ‘I want this character to be with this character. And I want this line in it somewhere.’ And I would just make up a story real quick, and then send it out. I made a fake name. I tried to make it look like I was like a white girl from like California.”

Somehow, a family friend realized who she was.

“And, um, and my mother found out,” Latortue says. “That did not end well for me. I can laugh about it now. In the moment, I was like, ‘Sweet Jesus, what have I done?'”

Embarrassment aside, she found out people really liked her writing — liked it enough to pay for it, in fact. And things turned out okay. She attended Oakwood University in Huntsville, Alabama, then went on to SCAD, where she produced five thesis films and a podcast called The Struggle is Reel. She also interned at Viola Davis’ production company, JuVee Productions.

‘Would You Rather Work for a Company or With a Company?’

Last year, rather than waiting for Hollywood permission to make films, she and her writing partner, Erik Francisco Medina, founded their own Atlanta-based production company, Anacaona Pictures, named for the Taino Queen who lived more than 500 years ago in what is now Haiti.

“After I interned with JuVee Productions, I kind of had a moment to where I had to ask myself, would you rather work for a company or with a company?” she says. “And I thought to myself, ‘Well, before you jump ship and move to L.A., you’ve already invested thousands of dollars into your education. Why don’t you just start your own company and see where that leads you? And then at the end of the day, if it doesn’t work out, you can always go work for someone.’ But I feel like I deserve the chance to prove myself and deserve to see what I can do with the resources that I was given. And my writing partner had the same kind of revelation. And we decided, okay, let’s just start our own company and see what happens.”

They’ve written more than 30 scripts, and are currently in touch with Los Angeles-based showrunners interested in developing their work.

Anacaona is especially focused on telling diverse stories, in part because Latortue has seen the benefits of cultural diversity firsthand. Some people think of diversity as going outside their comfort zone. But for Latortue, growing up surrounded by diversity was a comfort zone.

When she lived in West Hempstead, she could take the train into New York City and see people from all over the world. But after she finished middle school, her family moved to Charlotte, North Carolina, which was “a very big culture shock for me.”

“Coming from Long Island, I’m so used to walking to school and going to the corner shops and the bodegas and just doing whatever it is that I need to do — my parents weren’t worried about me. Then I got to North Carolina, and I saw cows and there were no sidewalks and my school was too far for me to walk. All I saw were Blacks, Latinos, and white people. And that was it. And then the white people were the majority where we lived, and it was just so weird to me, because they had their own cliques. And there was a point where I felt like I was too Black for the white kids and too white for the Black kids. And so I was just kind of in a limbo. And also because I couldn’t walk anywhere, I couldn’t do any of the activities that I wanted to. So that that first year there was a really rough.”

With “Chocolate Thunder,” she was able to create her dream high school, where everyone in a very diverse environment is united together in a campus-wide mystery: Who is the mysterious online love God known as Chocolate Thunder?

She was able to briefly take over a real high school to do it. Oakwood, her undergraduate university, is operated by the Seventh-Day Adventist Church, which also operates many schools worldwide.

“And because I was an alum from my undergrad, they were like, ‘Oh, you’re an Oakwood grad! Come on over.’ They did not charge me at all. We shot on two Sundays, because it was after their sabbath, and the schools were empty. So they just let me come in and do what I had to do.”

‘We Don’t Have Time to Panic, We’ve Got to Problem-Solve’

The film’s biggest challenge, she says, came when the original female lead suddenly had to drop out. “She thought we were shooting at 8 p.m. at night, instead of 8 a.m.,” Latortue explains. She remembers the moment she got the bad news.

“My writing partner comes in and he just was like, ‘Hey.’ And I knew something was wrong, immediately off the bat. I said, ‘What is happening?’ And he said, ‘Before I tell you, I want you to repeat after me: God is good all the time, and all the time, God is good.'”

She adds: “I wanted to let myself panic, but I told myself, ‘No, we don’t have time to panic, we’ve got to problem-solve.'”

They remembered that Francesa De’Mon, who they had cast as a cheerleader, had also auditioned for the lead female role, Alex. Latortue had liked her, a lot.

“So we called Francesca, and she thought she was getting fired. We were like, ‘No, we’re giving you the lead. Are you okay with that?’ And she was like, ‘Yes, I’m so okay with that.'”

As they waited for her to arrive on set, they broke out their laptops and did some quick rewriting.

Of the 30 scripts Anacaona is working on, Latortue says one of the furthest along is Diary of a Fat, Funky Black Girl.

“It follows the story of a very overweight Black girl who basically just wants to find the love. And she goes on a journey of self- acceptance and self-discovery,” Latortue says. “So the best way I can explain it is the prequel to Lizzo. Like how did Lizzo get to the point to where she is so confident and so successful in what she’s doing?”

She says the slowdown in all productions because of COVID-19 has given them more time to get it exactly right. The story includes Native American, Indian, Haitian-American, and Puerto Rican characters, and Latortue and Medina have made sure they’re presenting them all respectfully.

“Taking the timeout to understand certain things has been really good for us,” she says.

You can learn more about Mahalia Latortue and Anacaona Pictures here. Though SCAD became a presenter of this post, it had no control over editorial decisions.