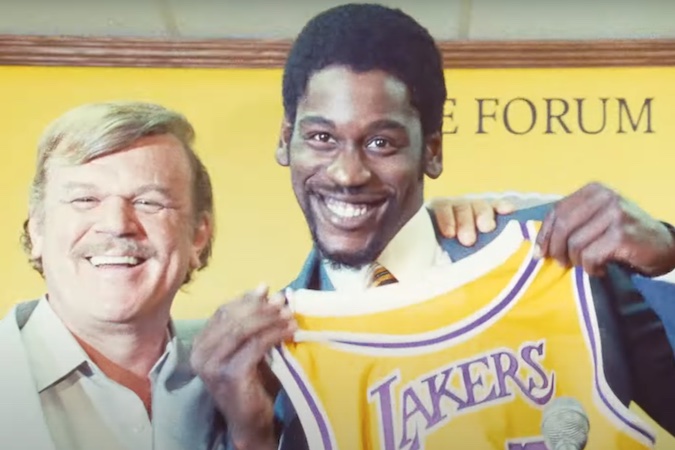 The teaser for the Adam McKay Lakers series is here; ideas to fix the Oscars; revisiting a clash between John Travolta and the first director of Saturday Night Fever; Slamdance unveils and “anti-algorithm” lineup. All in today’s Movie News Rundown.

How to Fix the Oscars: The New York Times‘ Kyle Buchanan has some ideas about how to fix the Oscars this year, including adding a host. One thing: Given West Side Story, Coda, Respect, In the Heights, Annette, and all the other musicals and music-filled films this year, maybe just stack the whole show with soaring musical numbers? Get The Weeknd and Lana Del Rey to co-host and sing the whole thing?

Lakers Teaser: The Adam McKay L.A. Lakers show has a brand-new name and a teaser. The name is Winning Time: The Rise of the Lakers Dynasty, which is fine because Showtime was too confusing, and the trailer looks much more ’80s than anyone suspected, down to the film stock. The cast includes John C. Reilly as Lakers owner Jerry Buss, Adrien Brody as Pat Riley, and Quincy Isaiah as Magic Motherfuckin’ Johnson:

Anti-Algorithm: Slamdance has announced an “anti-algorithm” lineup for the 2022 hybrid festival, which will take place from Jan. 20-23, 2022. Slamdance president and co-founder Peter Baxter says the full lineup, which you can check out here, will “celebrate truly unique voices that defy simple classification and transcend analytics.”

Alec Baldwin: Last week I wrote way too much about how Alec Baldwin could be telling the truth when he says he didn’t pull the trigger in the Rust shooting. The Washington Post spoke to some firearms experts who are very skeptical of his assertion. The Post writes: “Several gun experts increasingly say this scenario does not make sense unless there was a serious mechanical defect with the gun — which should have been obvious before it was used.”

Right, Sure: But it also should have been obvious that there was live ammunition in the gun, and that tragically escaped everyone’s notice.

Thanks Criterion: We don’t hate it when Criterion mentions us twice in one of their pieces.

Why Though? Maggio explains, “Travolta, by all accounts, is a perfectionist, and he really wanted to get this just right. I mean, you see it — the dancing, it’s unbelievable. It’s transcendent. And [Travolta] brought that into the script, and they just did not get along.”

Comment of the Day: Yesterday I invited the tens of thousands of people who receive this daily Rundown in their email to share their favorite New York movies. Only my mom responded: “Crossing Delancey and Moonstuck are my favorites!” My mom wins, as per usual.

Here’s Some of That Transcendent Dancing You’ve Heard So Much About: Can any of our readers who were around in the 1970s explain why they had to clear the floor for Travolta to dance? Was this a COVID protocols thing? Mom?