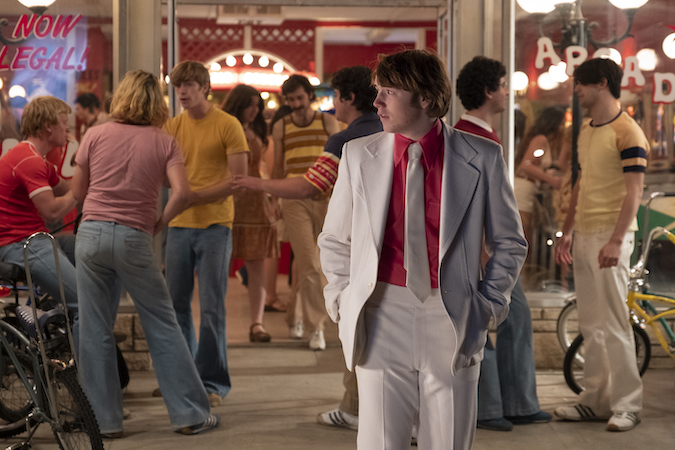 How Alec Baldwin’s explanation makes sense; the National Board of Review names Licorice Pizza the best film of the year; we talk with Kenny G about a new doc devoted to his career; an Astroworld special is pulled from Hulu. Also: How to see West Side Story early in IMAX. All in today’s Movie News Rundown.

Zoomin’ With Kenny G: We are extremely jealous of Margeaux Sippell, who got to Zoom with Kenny G to discuss the new Penny Lane documentary Listening to Kenny G, which is terrific.

Licorice Pizza: The National Board of Review, founded in 1909 to support the art of cinema, says Paul Thomas Anderson’s Licorice Pizza is the best film of the year and that Anderson is also the best director. Will Smith was named best actor for King Richard and Rachel Zegler best actress for West Side Story (see below). Here is the full list of winners.

See West Side Story Early in IMAX: West Side Story director Steven Spielberg and stars Ansel Elgort, Ariana DeBose, David Alvarez and Mike Faist will take part in a free “IMAX Live Fan Event” this coming Monday at 10 North American IMAX locations, in which a Q&A will be followed by a screening of the widely praised new musical. The locations are Boston, Chicago, Daly City, Irvine, L.A., New York, Paramus, N.J., San Francisco, Seattle and Toronto. Tickets are here. It’s this at 4 PT/7 ET Monday. West Side Story comes out next Thursday.

Astroworld: Hulu has pulled a 50-minute news special on the Astroworld concert where 10 people died last month. Astroworld: Concert From Hell (cool tasteful title) originally aired as an “investigative local-news special out of Houston,” the Los Angeles Times reported, but angry people on Twitter thought it was a fast-turnaround documentary that Hulu churned out “trying to make their profit,” in the words of one of the people who complained. You can judge the special’s merits for yourself because it’s still available for viewing at the website of Houston ABC affiliate KRTK.

Alec Baldwin: I apologize in advance, because we’re about to get deep in the weeds about journalism and guns. Ready? Okay.

Baldwin and the Trigger: On Wednesday, after announcing its interview with Alec Baldwin, ABC News released a teaser in which Baldwin told George Stephanopoulos he “didn’t pull the trigger” of the gun that killed cinematographer Halyna Hutchins and wounded director Joel Souza on the set of Rust. This confused many of us, because Baldwin has been reported to have fired the shot since the Oct. 21 tragedy. After hours of letting everyone be baffled by the limited information, ABC News finally gave us more context for Baldwin’s confusing comment when the full interview aired last night.

I Don’t Speak Gun. What Is He Talking About? Who is ultimately responsible, I can’t stress enough, is up to the authorities to determine. I have zero expertise. But here’s my layperson explanation, and feel free to do your own research. Here we go:

The hammer is the thing that actually makes a bullet fire.  The trigger is the thing that makes the hammer pull back and release. In the very old-style Colt .45 Baldwin reportedly used, the hammer needs to be manually cocked, according to this helpful article. So the person holding the gun cocks the hammer, and then pulls the trigger to release it, causing the bullet to fire. One could also manually pull back and release the hammer, causing the bullet to fire. So yes — you can shoot a Colt .45 without pulling the trigger. Here is a video of a guy doing it:

Rebuttal: I’ve seen some folks argue that a gun like Baldwin used could not be fired with the hammer alone because new models have something called a “transfer bar” that prevents this. I’ve also seen it reported (you really should check out this post if you’re interested) that says the guns may be sold either with or without a transfer bar.

Here’s Where ABC News Did Something Journalistically Misleading: By initially releasing only the teaser where Baldwin said he didn’t pull the trigger, ABC News led many of us to the reasonable interpretation that he might be denying he fired the shot.  The full comments show that in fact he seems to be acknowledging that he did fire the shot, just not in the way we normally think of a shot being fired.

Is Anyone Still Reading This? Thanks! My point here is just that context matters and that half-context isn’t good for information. I have no idea who is ultimately responsible in the Rust shooting.

Service Station: When you go searching YouTube for videos about old guns, the algorithm assumes you’re a weird old man and serves up videos like this one. What can I say? Sometimes the algorithm really nails it.