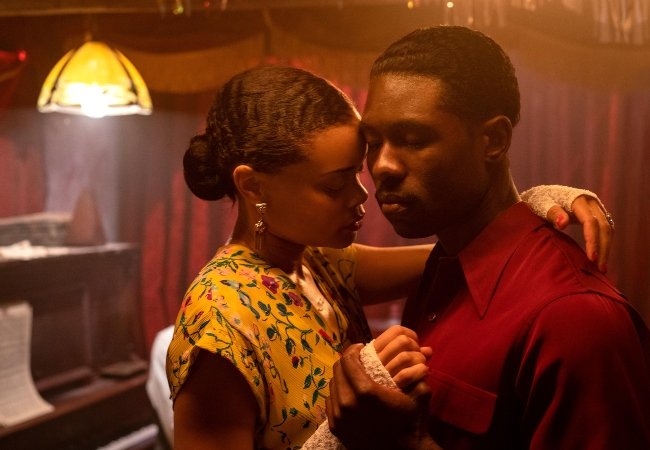 In The United States vs. Billie Holiday, Lee Daniels’ new Hulu Original film about the life of Billie Holiday and her constant battle with the U.S. Treasury Department’s Federal Bureau of Narcotics, federal agent Jimmy Fletcher is sent to bust her for heroin possession and ends up falling in love with her. But did it really happen that way in real life?

Neither Holiday nor Fletcher ever admitted to having a relationship on the record — but there is strong evidence to support that Fletcher was in love with her.

Fletcher met Holiday after he was hired by the Federal Bureau of Narcotics to infiltrate her social circle and gain her trust — something the bureau’s head, Harry Anslinger, knew would be nearly impossible for a white agent to pull off. According to an article written for Politico by Johann Hari, author of Chasing the Scream: The First and Last Days of the War on Drugs, Anslinger used the threat of incarceration for Holiday’s heroin addiction to bully her into staying silent about racial injustice.

It was a roundabout way of punishing Holiday for her refusal to stop singing her song “Strange Fruit,” whose lyrics vividly describe the lynching of Black Americans in the South where it was a common practice in the early 1900s.

“To Harry Anslinger, Billie Holiday was like the symbol of everything that America had to be afraid of,” Johann Hari, author of Chasing the Scream: The First and Last Days of the War on Drugs, said in an interview with WNYC Studios. “She had a heroin addiction because she’d been chronically raped as a child and she was trying to deal with the grief and the pain of that. And also, she was resisting white supremacy. And when she insisted on continuing on her right as an American citizen to sing ‘Strange Fruit,’ Anslinger resolves to destroy her.”

It’s also true, as the end of the film states, that Fletcher always felt guilty for gaining Holiday’s trust and getting her arrested, which resulted in a year-long jail sentence and the loss of her cabaret card after she got out, preventing her from singing in any jazz club that served alcohol in the country.

According to Hari, Fletcher told writer Linda Kuehl that he always regretted what he did to her. “Billie ‘paid her debt’ to society,” one of Holiday’s friends wrote, “but society never paid its debt to her.”

As for whether Fletcher actually fell in love with Holiday, Hari believes that he did.

“The man Anslinger sent to track and bust Billie Holiday had, it seems, fallen in love with her,” Hari wrote in his Politico story.

According to Hari, after Fletcher first raided her apartment for drugs, he took Holiday aside and offered to talk to Ansliger for her in an attempt to lighten her punishment, saying, “I don’t want you to lose your job.” Soon after, they ran into each other at a bar and “talked for hours,” Hari said. And on another occasion, they ended up dancing together at a spot called Club Ebony.

“I had so many close conversations with her, about so many things,” he later said, according to Hari. “She was the type who would make anyone sympathetic because she was the loving type.”

Also Read: 18th and Grand Traces L.A. History Through a ‘Palace of Violence’

Trevante Rhodes, who played Fletcher opposite Andra Day’s amazing portrayal of Holiday in The United States vs. Billie Holiday, said that in his research for the character, he came across an interview with Fletcher in which his lack of explanation for his relationship with Holiday spoke volumes.

“There was a distinct question that the interviewer had about their love, and it was just his response that really gifted me a unique answer,” he told Refinery29. “It was just stuff like that makes the character to me. Really, really small like that.”

Whether or not they actually had a physical relationship is hard to say, but it does seem that Fletcher and Holiday did have some sort of relationship, though it may have involved a sense of betrayal.

After Holiday’s 1956 autobiography Lady Sings the Blues was published, Hari writes that Holiday sent Fletcher a signed copy with the following note inside: “Most federal agents are nice people. They’ve got a dirty job to do and they have to do it. Some of the nicer ones have feelings enough to hate themselves sometime for what they have to do . . . Maybe they would have been kinder to me if they’d been nasty; then I wouldn’t have trusted them enough to believe what they told me.”

But even if the film did embellish some aspects of their relationship, the screenwriter Suzan-Lori Parks notes that it served an important purpose to the storyline.

Strange Fruit: The History of Billie Holiday’s Famous Protest Song
Gary Oldman, 24 Years Sober, May Have Noticed Some Things You Didn’t About Mank