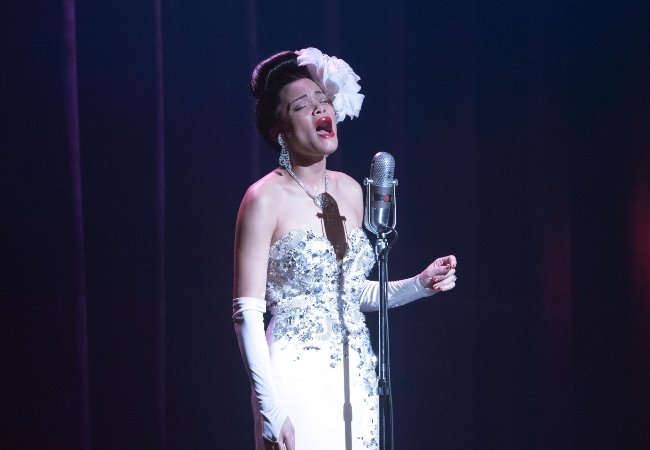 Out Friday on Hulu and starring Andra Day as Holiday, the film details the jazz singer’s decades-long battle for the right to sing Strange Fruit despite tireless pursuit by the Federal Bureau of Narcotics and its former head, Harry Anslinger, who used her heroin addiction to keep her in constant fear of incarceration.

“To Harry Anslinger, Billie Holiday was like the symbol of everything that America had to be afraid of,” Johann Hari, author of Chasing the Scream: The First and Last Days of the War on Drugs, said in an interview with WNYC Studios. “She had a heroin addiction because she’d been chronically raped as a child and she was trying to deal with the grief and the pain of that. And also, she was resisting white supremacy. And when she insisted on continuing on her right as an American citizen to sing ‘Strange Fruit,’ Anslinger resolves to destroy her.”

Record producer Ahmet Ertegun called the song “the beginning of the civil rights movement,” according to The New York Times. But a little-known fact about Strange Fruit is that it was originally written by a Jewish-American school teacher and songwriter from The Bronx. Abel Meeropol first published the song as a poem in a 1937 edition of The New York Teacher magazine under the title Bitter Fruit, according to BillieHoliday.com, which is maintained by her estate.

However, the story of how the poem was put to music and brought to Holiday is somewhat contested. In Holiday’s 1956 autobiography Lady Sings the Blues — which Holiday’s website notes was ghostwritten by William Dufty— Holiday says she set it to music in collaboration with Meeropol, her accompanist Sonny White, and arranger Danny Mendelsohn. However, her account has been challenged by authors David Margolick and Hilton Als in their book Strange Fruit: The Biography of a Song. They insist that her book offers “an account that may set a record for most misinformation per column inch.”

When Holiday was asked to respond, she simply said, “I ain’t never read that book,” according to her website. The site also says Meeropol himself set the song to music, and that it gained some popularity as a protest song around New York before it found its way to Holiday.

As her career grew, Holiday fought to continue singing the song despite mounting pressure from the FBN to stop, as depicted in The United States vs. Billie Holiday.

“Billie Holiday received a warning from agents at the Federal Bureau of Narcotics. And the warning said, effectively, stop singing this song,” Hari said in an interview with NPR.

Also Read: Joe and Anthony Russo on Cherry: ‘A Movie Can Live or Die By Its Tone’

Believing in the song’s message, Holiday refused — and in 1947, she was arrested for narcotics possession and sentenced to a year and a day in prison. As the movie depicts, when she was released, she lost her cabaret card as a result of her drug conviction. Without that card, she couldn’t perform anywhere alcohol was sold, forcing her to move on to theaters and concert venues, according to John Lahr, writing for the London Review of Books.

“You have to understand that [Anslinger] was regarded as an extreme racist in the 1920s,” Hari said in the WNYC interview. “He used the N-word so often in official memos that his own senators said he should have to resign.”

Hari also told NPR: “This was not a time when there were political pop songs. And to have an African-American woman standing in front of a white audience singing a song against white supremacy and its violence was viscerally shocking at that moment.”

The fact that she was able to record the song at all is a testament to her determination.

Her record label, Columbia, declined to release Strange Fruit as a single for fear of adverse reactions from Southern record retailers and radio affiliates, according to BillieHoliday.com. When her producer, John Hammon, refused to help her record it, she sang the song a cappella for her friend Milt Gabler, who was moved to tears, according to the site. The single ended up being released on Gabler’s Commodore label after Columbia agreed to release Holiday from her contract for one session so she could record it.

That 1939 single went on to sell a million copies, and it was eventually inducted into the Grammy Hall of Fame in 1978. Time declared it the song of the century in 1999, and it was added to the National Recording Registry by the Library of Congress in 2002.

Here are the lyrics:

Pastoral scene of the gallant south
The bulging eyes and the twisted mouth
Scent of magnolias, sweet and fresh
Then the sudden smell of burning flesh

Here is a fruit for the crows to pluck
For the rain to gather, for the wind to suck
For the sun to rot, for the trees to drop
Here is a strange and bitter crop

18th and Grand Traces L.A. History Through a ‘Palace of Violence’
Did Federal Agent Jimmy Fletcher Really Fall in Love With Billie Holiday?