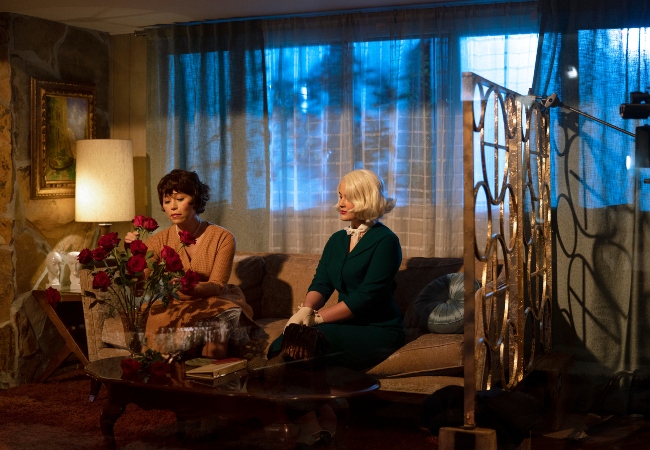 One of Virginia Woolf’s most popular novels served as the inspiration for “The Actress,” a short film written and directed by Savannah College of Art and Design alum Andrew Ondrejcak and commissioned by the university.

His short film “The Actress,” also produced by fellow SCAD alum Mandy Ward, was screened at SCAD Savannah Film Festival on Thursday. Starring trans actress and director Isabel Sandoval (Lingua Franca), “The Actress” follows a woman who transcends time and space, embodying and reimagining archetypal roles from classic Hollywood films including Barbarella, A Clockwork Orange, and Marlena Dietrich’s 1930 film Morrocco, which was made just before Hollywood’s now-defunct Hays Code took effect and which Ondrejcak says was the first film ever to show a woman wearing men’s clothes and kissing another woman.

“I’m often interested in the sort of human shapeshifter. Someone who lives in these different bodies sort of in search of their own; the right body for their soul and their spirit,” Ondrejcak said. “I’m always moved by that experience,”

Enter Orlando. Published in 1928, the novel takes place over a period of a few hundred years, beginning with the birth of the main character, Orlando, in Elizabethan England circa the late 1500s. But at the age of 30, Orlando mysterious changes sex from a man into a woman and proceeds to live for another 300 years without ever aging.

“The Actress” came about after an operatic version of Orlando that Ondrejcak was working on fell through, leading him to imagine a movie version of it instead. Having directed short films in the past including Didot’s Lament, Objet D’Art, and most recently Story and the Writer starring Tilda Swinton, SCAD president and founder Paula Wallace gave Ondrejcak the creative freedom to make “The Actress” with all of the university’s resources at his disposal. It was shot entirely in Savannah, Georgia at SCAD over just a three-day period with a crew of both industry professionals and SCAD students.

“I’ve had this wealth of information about Orlando, so I started constructing a movie treatment of it… I started very small steps piecing together “The Actress,” which I hope will lead to other bigger feature film iterations of the same idea,” he said.

“At the end of the day I think it’s a real piece for Isabel, and I think it’s really important that people can see that a trans person can play a mother — that a trans person, a good actress, can traverse all of these roles. And even if you don’t know she’s trans, [she’s] an Asian woman,” he added. “There’s a conversation about beauty and a queer political dimension to it, but at the end of the day, it’s about showcasing someone’s talent that would otherwise not have the opportunity.”

Main image: A still from Andrew Ondrejcak’s “The Actress,” courtesy of SCAD.