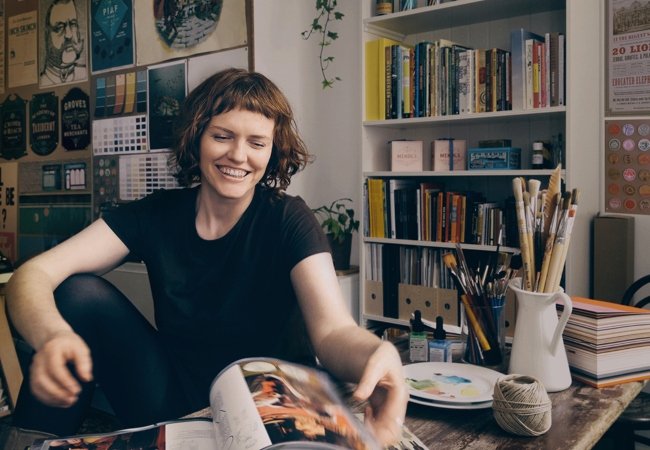 Annie Atkins specializes in a part of the film industry that is rarely talked about: graphic design. She’s worked with everyone from Wes Anderson to Steven Spielberg on films like The Grand Budapest Hotel and Bridge of Spies.
She defines graphic design for film as “anything with text on it, anything with a picture, or anything with pattern.” But even though her work is essential to the authenticity and historical accuracy of a film’s overall aesthetic, the majority of her work is lucky to get even a second or two of camera time, if that.
“It’s funny, I don’t feel disappointed when I don’t see a piece that I’ve worked on in a movie because quite often, something will just not be shot on at all — or something will be shot, but it’s in the blurry background, or it’s upside down, or an actor’s got his hand over the wine bottle label or whatever it is. Chances are your work is not going to be seen,” Atkins said in a conversation at The Savannah College of Art and Design’s 15th annual SCADStyle event, moderated by Duke Greenhill, chair of graphic design, advertising, and branding at SCAD.
Also Read: John Wick Creator Has Made Peace With Leaving Franchise: ‘I’m Never Going to Talk Shit’
“But what I do feel is an absolute thrill when you do see something — when you get what we call a ‘hero shot,’ or a close-up on something that you’ve made that lasts, like, a second. I think a second of screentime is quite a long time to focus on any prop,” she said. “You have to leave your ego at the door, really.”
When it comes to her own style as an artist, Atkins says she’s learned to embrace a level of creative detachedness in order to master the art of forgery when working on period movies. 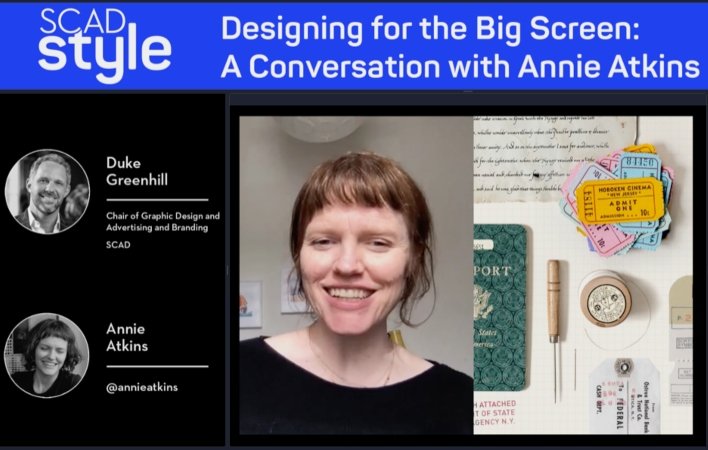 Annie Atkins pictured beside some of the props she’s designed for various films, Courtesy of SCAD

“You have to be able to copy to make something of value for a film set, so it’s more like forgery than creativity,” Atkins said. “You have to be able to forge documents. You have to be able to study your documents exactly, understand how all the different components are made and imitate that convincingly… My workshop students are sometimes hesitant because they feel like copying is cheating somehow, because they’ve learned to try and be original at all times. So first of all, I have to get originality out of them.”
But even if the audience only gets a glimpse of the level of detail Atkins puts into her work, the actors do.
“I suppose we’re mostly designing for the cast. It’s for when the actors arrive on set in the morning and they look through the props that they’re going to be working with and they look at the set pieces. We really want to transport them to a different time and place,” she said. “The level of detail is always really high… I think people assume that we probably just use gobbledygook, like lorem ipsum, and we don’t. We actually never do that.”
Also Read: Should You Move to Mississippi?
The research she does to obtain not only the detail but the historical accuracy needed for period films is extensive.
“I remember on the last French film I worked on, I really need to see what bus stop signs in France looked like in, like, 1952 or something. I just couldn’t find it, and I contacted the researcher, and immediately she had like 10 photographs of bus stop signs from the ’50s,” she said.  “Some things are relatively easy to find — there’s plenty of archives and beautiful websites about lovely chocolate boxes. There are fewer sources for finding old bus tickets.”
“Sometimes you really need to go to a museum, go to the library, go to an auction, buy pieces. It’s really important to have physical, tactile pieces because it’s very different, looking at a picture of a telegram on a screen to how it is actually holding a telegram in your hands,” she said. “So I also do a lot of shopping for rubbish online — I go to eBay and I buy things… look in your grandmother’s attic, you know? Look to see inside books what people were using as bookmarks 50 years ago. That’s where you’ll find a bus ticket from 1963.”
Main Image: Courtesy of Annie Atkins.
Continue Reading
Advertisement