How Tall Are Godzilla and King Kong? Godzilla vs. Kong Director Adam Wingard Tells Us 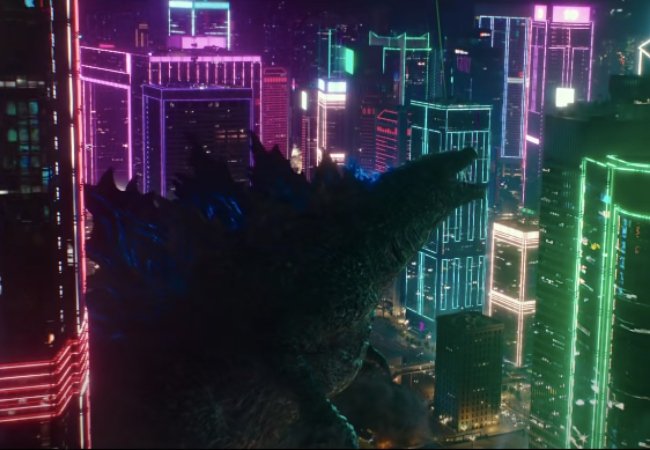 How tall are Godzilla and King Kong? Luckily for the citizens of Earth, the monsters aren’t real, so it’s difficult to pinpoint their size exactly — but Godzilla vs. Kong director Adam Wingard has a pretty good estimate.

“In terms of the sizes of the monsters, what I will say is that when we were making the movie, I think the asset sizes were about —I think that Godzilla was around 350 feet tall. And I don’t remember the exact size of Kong, but I know that he was always a head shorter than Godzilla,” Wingard told MovieMaker on the latest episode of our podcast, which you can listen to on Spotify and Google and Apple and above.

And when he says “a head shorter,” he doesn’t mean a human head.

“Like, an actual Kong head shorter,” he said. “Which is much bigger than Godzilla’s head, obviously.”

These are the types of figures that Godzilla fans often ask him for, and he doesn’t want to lead them astray.

“The reason I don’t want to like back myself into a corner here with this is that the Godzilla fans love this kind of stuff, you know? They love seeing the sizes, the weights, all that stuff, and they keep up with it,” he said. “And they’re there. They’ve been asking me and stuff, but it’s one of those things where I know how tall they are in general — but in terms of giving you an actual numerical figure, I don’t want to conflict with anything that’s out there.”

Wingard also told us about a scene in Godzilla vs. Kong that involves an especially epic fight between the two monster-rivals on top of an aircraft carrier in the ocean. 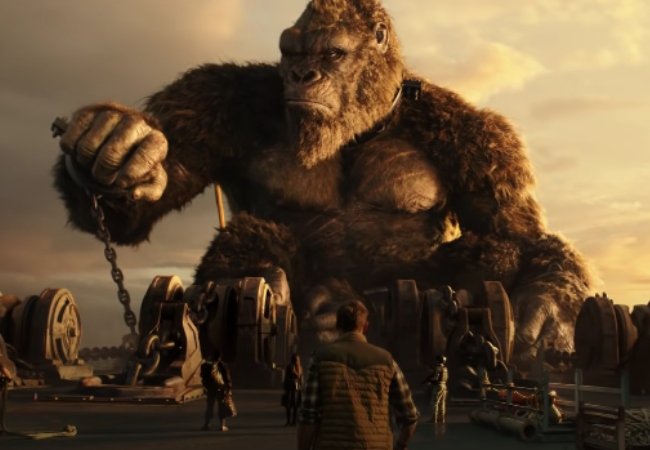 “Obviously, we’re making Godzilla vs. Kong, so credibility is not necessarily — in terms of believing that this is real, it’s not necessarily like the highest priority. But we didn’t want to do things that were just so absurd that it would take people out of the film. And so my first instinct when I read that was like, really? Could Godzilla and King Kong fit on an aircraft carrier?”

The answer, theoretically, is yes.

“I actually worked with the art department a little bit. My friend, Tom Hammock, he came on board this movie — he’s been one of my most consistent collaborators over the years since You’re Next, and he showed me a graph where it had a picture of an aircraft carrier, and it had the feet, you know, how long it is — and then Godzilla and King Kong as we know them in the MonsterVerse and how big they are in our version. And so I was kind of surprised that, yes, they’re big enough to fit on an aircraft carrier.”

But they didn’t stop there.

“The art department did a weight study of Godzilla and Kong. I mean, there’s obviously no way that you can actually, accurately say how much these characters would weigh. We don’t know what they’re really made of, necessarily. But in terms of a height ratio, and it’s kind of an estimation — they brought it in and they said, listen, what an aircraft carrier could handle would technically be able to handle Godzilla and King Kong.”

Wingard says that little details like that were often on his mind during the making of the movie.

“These are the type of thoughts that start popping in your head right away when you’re making a movie like this, you know?” Wingard said. “You’re kind of trying to figure out like, okay, what’s too much, and what’s just right, what’s the sweet spot? And what just doesn’t matter at all? Because at the end of the day, this is Godzilla and Kong, and it’s about entertaining people.”

Main Image: Godzilla pictured in Godzilla vs. Kong, which is in theaters and on HBO Max Wednesday.

The Last Cruise Director Spotlights First ‘Human Shields’ of the Pandemic
8 Little-Known Facts About Princess Margaret From Elizabeth and Margaret: Love and Loyalty