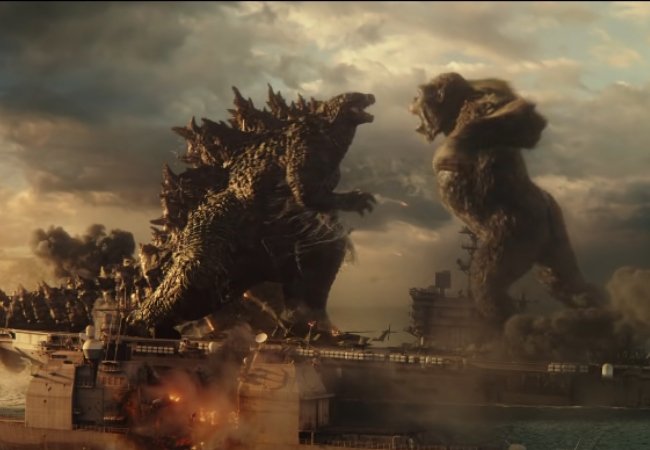 Godzilla vs. Kong director Adam Wingard has a point to argue about Godzilla.

True, the very tall lizard creature has no qualms about killing thousands of people in one fell swoop by breathing fire on them. And yes, he has, historically, climbed skyscrapers and squashed cars with his bare feet. But has anyone stopped to consider that maybe Godzilla isn’t such a bad guy?

“I think it’s less of him being a dick for the most part, and that humans are just so small, and our problems are just so different than his, you know?” he told MovieMaker on the latest episode of our podcast, which you can listen to on Spotify and Google and Apple and above.

“In some scenes, you could say, hey, look, he’s blowing up all this stuff. And, you know, maybe killing hundreds and thousands of people in some instances. But it’s kind of like, yeah, we’re important on this planet — but the planet’s going to go on with or without us. Godzilla’s real allegiance is towards the planet Earth, and he’s sort of the white blood cells of the planet… and so, if there’s collateral damage, he’s not really going to lose sleep over it.”

But Godzilla hasn’t always been the antagonist. Wingard notes that occasionally in his decades in film, he’s been the good guy — including in the Warner Bros. and Legendary MonsterVerse, which includes Godzilla (2014), Kong: Skull Island (2017), and Godzilla: King of the Monsters (2019).

Wingard says that even though Godzilla has gone back to being the baddie in Godzilla vs. Kong, that “doesn’t necessarily mean he doesn’t like us, or he’s a bad guy.”

“We kind of play a little bit more of him as the heel on this movie. But traditionally, Godzilla has been a lot of different things. He’s a pendulum of a character. I mean, he started out bad — he’s gone from that to good. And then he swung back to bad again. It’s something that’s been happening over the years, and so it was just a matter of time that the MonsterVerse version, which traditionally he’s been a good guy in these films, would eventually get to the point where he’s a little bit more, you know, slightly villainous.”

Wingard is very pleased to be directing the newest baddie-Godzilla movie.

“I kind of lucked out in that sense,” he said, “because if you get the bad version of Godzilla, you get to show him blowing a lot more stuff up.”

Speaking of blowing things up, Godzilla vs. Kong involves an especially epic fight between the two monster-rivals on top of an aircraft carrier in the ocean.

“Obviously, we’re making Godzilla vs. Kong, so credibility is not necessarily — in terms of believing that this is real, it’s not necessarily like the highest priority. But we didn’t want to do things that were just so absurd that it would take people out of the film. And so my first instinct when I read that was like, really? Could Godzilla and King Kong fit on an aircraft carrier?”

The answer, theoretically, is yes.

“I actually worked with the art department a little bit. My friend, Tom Hammock, he came on board this movie — he’s been one of my most consistent collaborators over the years since You’re Next, and he showed me a graph where it had a picture of an aircraft carrier, and it had the feet, you know, how long it is — and then Godzilla and King Kong as we know them in the MonsterVerse and how big they are in our version. And so I was kind of surprised that, yes, they’re big enough to fit on an aircraft carrier.”

But they didn’t stop there.

“The art department did a weight study of Godzilla and Kong. I mean, there’s obviously no way that you can actually, accurately say how much these characters would weigh. We don’t know what they’re really made of, necessarily. But in terms of a height ratio, and it’s kind of an estimation — they brought it in and they said, listen, what an aircraft carrier could handle would technically be able to handle Godzilla and King Kong.”

Main Image: Godzilla and King Kong fighting on an aircraft carrier in Godzilla vs. Kong.