Godzilla vs. Kong Director Wants His Face/Off Sequel to Feel 'Like a Lost John Woo Film' 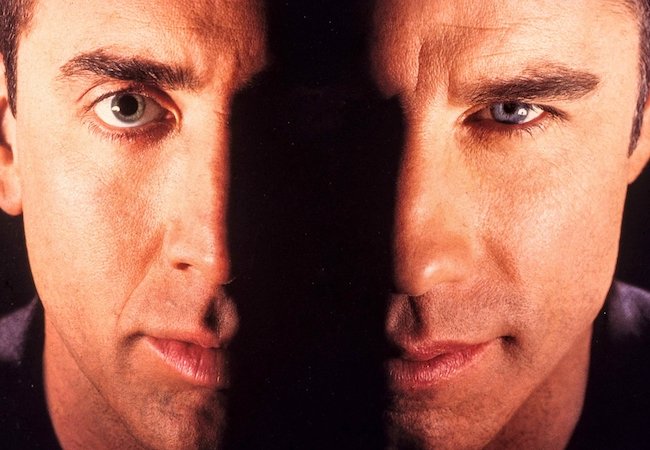 Godzilla vs. Kong director Adam Wingard will go from a face-off between monsters to a face-off between humans: His next film is a remake of the 1997 John Woo classic Face/Off, featuring Nicolas Cage and John Travolta as a master criminal and FBI agent, respectively, who switch faces in a complicated and wonderfully ridiculous medical procedure.
Wingard spoke to us about Godzilla vs. Kong for the MovieMaker podcast, but we couldn’t help but sneak in a question about his new take on Face/Off. We noted that one of the joys of the original film is seeing Travolta, as Sean Archer, and Cage, as Castor Troy, impersonate each other’s mannerisms and inflections.
“Face/Off isn’t about the surgery,” Wingard says. “It’s about the characters that they created, as Sean Archer and Castor Troy. And that’s the thread that we’re following for the sequel. We’re saying, ‘Okay, well how does this dynasty develop in the future?”
Wingard continues on the podcast: “And so it’s not a reboot, it’s not a remake, or any of that kind of stuff that people hypothesized over. It’s a direct sequel to the film. And I think we found a very clever way in. It’s hard to talk about it too much without giving anything away. All I can say is I’m just really excited because this is going to be a great opportunity for me to finally be able to — in an experimental way — say, ‘I want to do a movie that feels like a lost John Woo film.'”
You can listen to the full interview on Spotify and Google and Apple or here:


Wingard notes that he’s been studying Woo’s films all his life, but plans to pay even closer attention.
“When I’m going to hire my cinematographer, we’re going to sit down and we’re just going to watch all the John Woo movies that we can and we’re gonna try to get that same camerawork, the vibe,” Wingard adds. “I want that kind of like John Woo, Hong Kong sincerity that he brought to it.”
Wingard is working on the script with Simon Barrett, with whom he also worked on The Guest, V/H/S and You’re Next.
“Simon is just one of the funniest people I’ve ever met. And so the sense of humor that we’re bringing to it I think is exactly what you want from Face/Off — because I find Face/Off to be an absolute hilarious movie,” Wingard adds. “And it’s brilliant because it threads this line of just being so close to being campy and so close to being self-aware, but never going too far in either direction. … It always winks just enough, but it does just enough stuff that’s super sincere, that gets you in that un-self-aware zone that makes a good action movie good. If a movie winks too much and it’s too clever for it’s own good, then you just kind of feel like, well, what’s the point? If a movie is too aware of itself I don’t believe in the reality.”
He concludes: “Face/Off just hits this perfect tonal matchup…  where sometimes you can’t tell if it’s joking, but it doesn’t even matter because you’re having such a blast. And the actors really are doing top-notch work.”
Soon after we spoke, Wingard was announced as the director of a new Thundercats film. So unfortunately didn’t get a chance to ask about that. But we did ask plenty of Godzilla vs. Kong questions, including how tall Godzilla and Kong are. and why Godzilla is such a dick.
Godzilla vs. Kong, directed by Adam Wingard, is now in theaters and streaming on HBO Max.
Main image: Nicolas Cage and John Travolta in a promotional image for the original Face/Off, directed by John Woo.

Inside Cypress Cove, the Nude Resort Featured in Netflix's Worn Stories
Here’s What the Real Herman Knippenberg Thinks of The Serpent