Forty-Year-Old Version Moviemaker Radha Blank: You Don’t Have to Write at Four in the Morning 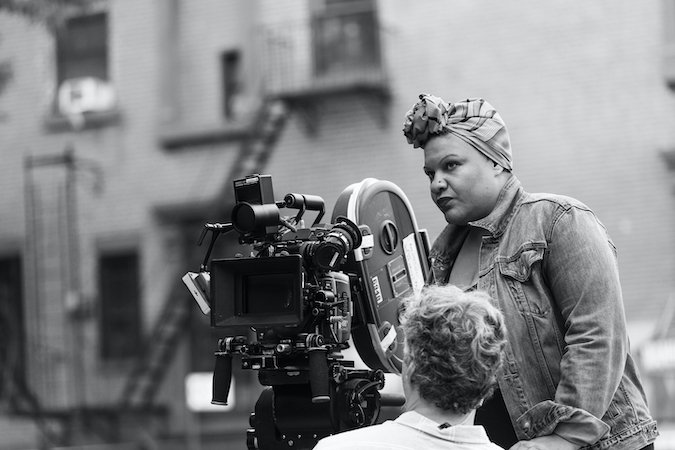 Radha Blank wrote, directed, produced and stars in The Forty-Year-Old Version, a semi-autobiographical film in which she plays a struggling New York playwright who breaks out as a rapper named RadhaMUSprime just before turning 40. In this piece, she talks about her writing process. —MM

I was raised by two struggling artists in New York, and so I saw the many ways a career in the arts could work, or not work. But I’d always been writing, and I was always encouraged to write. My mom was a massive cinephile. So, I grew up on John Cassavetes and Sidney Lumet and Hal Ashby. Kathleen Collins I knew about, but I didn’t see her films until later. Film was a huge pastime for our family, but it took me a second to call myself a screenwriter because I was exploring so many aspects of writing.

A lot of my mentors I’ve never met, and a lot of them are no longer with us. And so I’ve had to create my own curriculum, like watching tons and tons of films. I’ve been broke for most of my life, but I would go to the Lincoln Center archives and look at plays. I couldn’t afford the hundred-dollar ticket to see them on Broadway, but most of them had been archived, so I could go there and study.

Story continues below. You can also listen to our MovieMaker Interviews podcast with 40-Year-Old Version writer-director-star Radha Blank on Apple or Spotify or here:

There are little things that I’ve developed over the years, some on my own, and some from reading a book like The Art of Dramatic Writing, by Lajos N. Egri, which Fred Hudson, God bless his soul, introduced me to when I was 19 or 20.

He wrote a film called The Miseducation of Sonny Carson, and it was his only film. But what he’s really known for in some circles is founding the Frederick Douglass Creative Arts Center, which is no longer there, with Budd Schulberg, the writer of On the Waterfront.

The Art of Dramatic Writing changed my life, because it taught me to invest time in a character. If you know who a character is, you know how they’re going to react to a house being on fire or someone getting hit by car, or there being a pandemic. The book really helped me create characters from inside-out. But the biggest part was just accepting what my own process would be, as opposed to comparing it to how other people arrive at a screenplay. One big thing that I think is important for writers is to not compare their process to others. 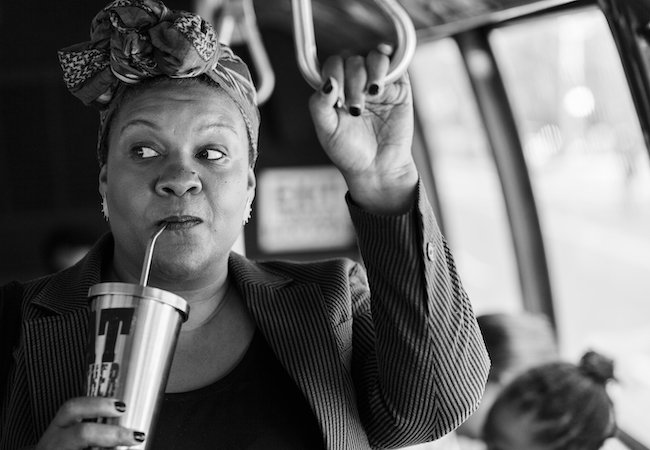 Radha Blank in The 40-Year-Old Version.

When I was in my mid- to late-twenties, I was in a relationship with someone who got up and wrote every day at four o’clock in the morning. I’d reached out for him and he wasn’t there. He was at his desk. I was the mistress, the writing was the wife. And for a time, I started emulating his process. But then when I read my work, it was a piece of shit.

I was a standup comic at one point. I was doing solo performance work. I was a rapper, which turned out to be helpful for The Forty-Year-Old Version. I was a playwright for many years struggling in New York: I’ve only had one major production, even though I’ve written a dozen plays. I was a teaching artist and I loved working with kids, but I always saw that as a temporary thing: One day I’d have some kind of breakout as a storyteller.

One of my plays was called Casket Sharp. It’s about this guy who takes over his dead father’s funeral parlor, and he ends up becoming a mediator between a dead boy’s gang family and his mother over how he should be buried. I did months and months of research, and one breakthrough for me was realizing, in that process, that research is writing. 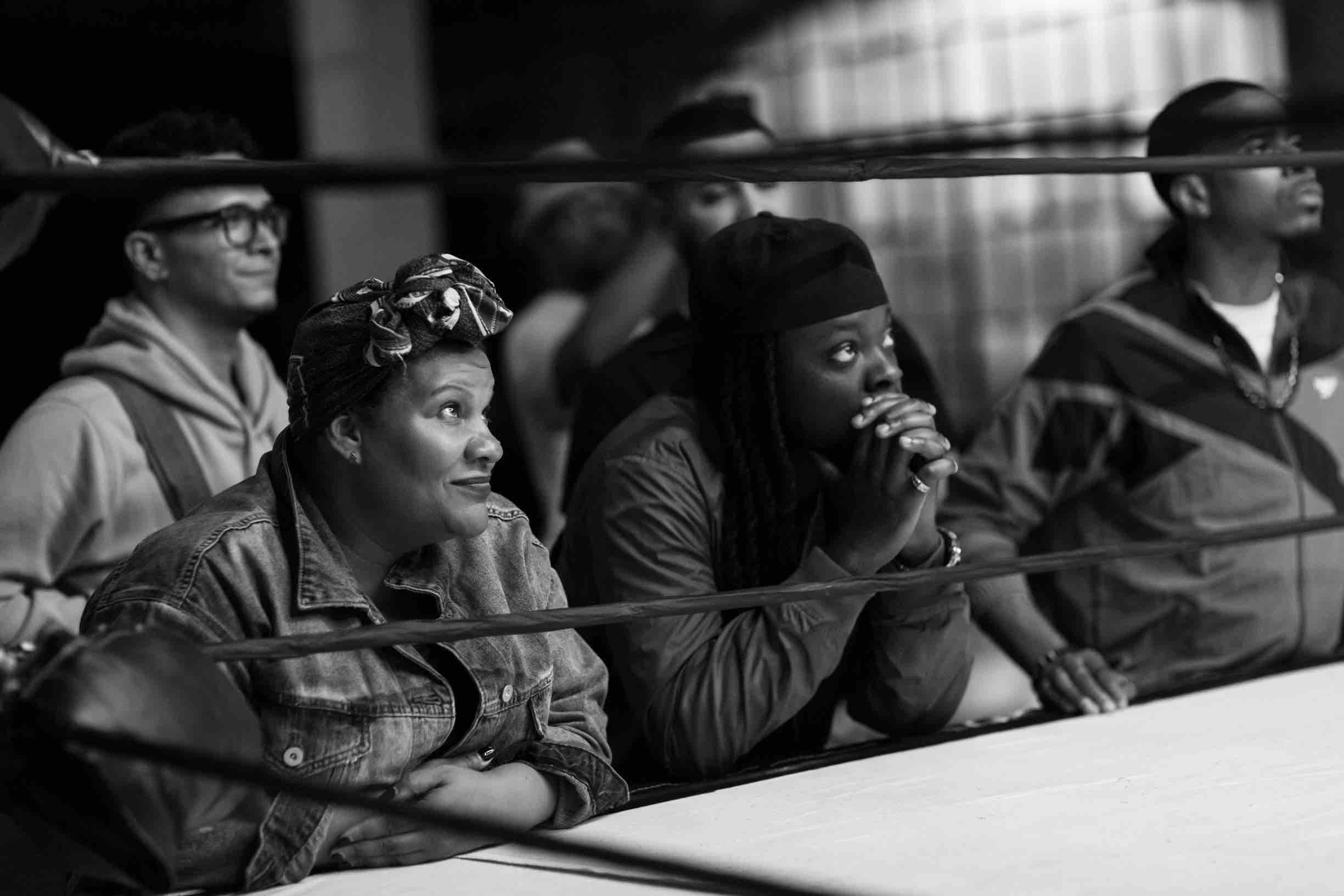 And then the smartest thing I did, which I had never done before this point, was write an outline. It changed everything. I was able to write that play in two days. Oh my God. I’m not saying that that is ever going to be everyone’s outcome, but having the outline, and then having the research just kind of spill into and spread out across that outline, was life-changing for me.

And so that’s a practice I’ve taken on.

And the other thing that has become the Holy Grail for me is knowing how I want the movie to end. Knowing how I want the movie to end becomes its own GPS. Even if the ending changes, I’ve done all of this work to get there. When I was a younger writer, it was very much about what I was writing down. Now, it’s more about going out into the world and just absorbing. I don’t schedule a particular time, because to be honest, many times, I feel like writing is a calling. When it grabs me, I don’t move.

So I may not sit down and write for weeks at a time. But when it does come, I hand myself over to it. It could be 72 hours, it could be longer than that. My mom used to call sometimes and then say, “Okay, I called you twice. I know what this means you’re in one of those holes. Please wash, please eat, take care of yourself.”

One thing I can’t live without in the process of writing is hearing the voices of the characters. And so when I’ve heard the voices a couple of times, then I slow down, because it’s time to have actors embody them. I don’t necessarily mean professional actors, but friends who can read a role. It tells me so much about what’s there. If after a while I’m like, “Okay, they need to stop talking,” that means I’ve overwritten the scene. Or if the actor is stumbling over the words, then the language isn’t loose enough. I cannot write without readings. When I’ve had one or two of those, I go back in and finish the work.

When I got my first screenwriting job, and got fired off the second draft, I was just like, “What gives? I have to do something to take my career back. I’m just going to do a web series, I’m going to shoot, do everything myself, I’m going to star in it. And this way, no one can fire me. and I’ll be my own boss.” And so I started writing a web series with me playing myself as a playwright, trying to have a big break before her 40th birthday. And she then decides to become a rapper.

About two weeks before we went to shoot the first two episodes, which we were going to use for crowdfunding, my mom passed away. And as you can imagine, it devastated my life. She was my best friend. We had the same birthday. And I was going to call it quits where art is concerned. I was going to become a social worker.

Thank God I didn’t. I probably saved more children by not becoming a social worker.

But I had all of this music as a companion piece to the web series. So I started going out and performing as RadhaMUSprime, and it was cathartic. I got to connect with an audience of women who were of a certain age. It’s a cabaret act that I’ve done for a couple of years, very self-deprecating, but all through the lens of hip-hop. And when I went out and did that for a couple of years, and came back and looked at the web series, it just felt a little too pedestrian. So I was just trying to find ways to keep the story fresh, but it also felt like at that time, and this was like 2016, an online web series felt like a millennial’s game. And so I started writing for TV. And I turned this web series into a 30-minute pilot. And then I thought, no one’s going to produce this thing. Nobody knows who the hell I am. And then I just got the notion: It’s a feature film, a feature film that I could keep independent and on the fringes.

Also read: Kirsten Johnson Made Dick Johnson Is Dead To Imagine the Unimaginable

I’ve been friends with Lena Waithe for many years, and at one point, she just said, “Why don’t you let me help you make your movie?” And that was it. And here we are.

I didn’t know The Forty-Year-Old Version was a comedy until Franklin Leonard, the founder of The Black List, read it. Franklin was the first person I shared the script with who wasn’t in my little tiny circle of writer friends. And he said, “I was on the plane laughing so loud. People were looking at me.”

I had the experience first at the Frederick Douglass Center, all those years ago, wanting to be a writer. And now it’s again been proven to me: my most valuable resource is my community.

The Forty-Year-Old Version, directed by Radha Blank, is now streaming on Netflix.