Kirsten Johnson Made Dick Johnson Is Dead To Imagine the Unimaginable 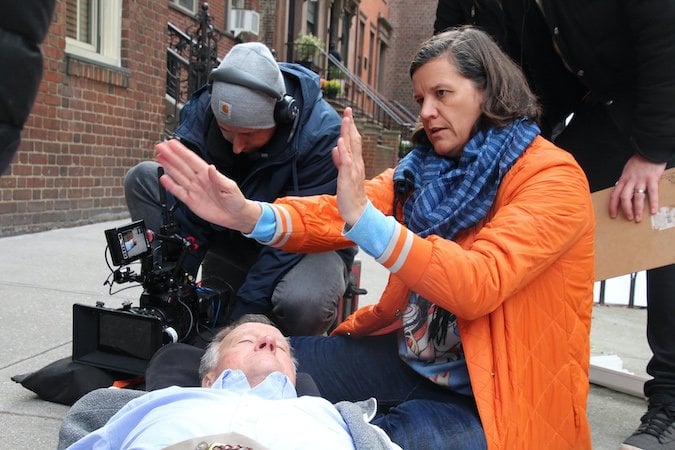 Kirsten Johnson is the award-winning moviemaker and cinematographer behind films like Cameraperson, Citizenfour, and The Oath. In the following feature she discusses how she worked through her own fears of her father’s death to develop the deeply personal Dick Johnson is Dead.

Irreverence. Pleasure. Transgression. Heartbreak. Betrayal. Laughs. What more do you want from a movie?

To not see any of it coming.

The Quechua tradition in Peru is credited with this metaphor for time: The past is in front of us, because it has already happened. The future is behind us, because we can’t see it coming.

The global pandemic we are now living with exemplifies this metaphor in spades. The future snuck up on us from behind. We didn’t see it coming and we still don’t.

This is what death does to us, too. It sneaks up on us. Fill in this blank with the name of a person you love beyond words (it could even be yourself ) : ________ is dead.

The brain refuses. It is so painful you don’t even want to complete the sentence, let alone actually imagine a future when that sentence will be true.

This pandemic has transformed the world into a place where we can suddenly imagine that any person is vulnerable to the possibility of untimely death. Including ourselves.

Can cinema help us? I have long believed that it can and it does. But this moment tests my faith anew.

Dick Johnson is my dad. Out of my absolute refusal to accept the possibility of his death, long before this pandemic came along, I made a film called Dick Johnson is Dead because I believed that cinema might help me bend time, laugh at pain, and keep my father alive forever.

Where did I ever come up with such an idea? How did we manage to make this movie? “Development” is a word we use to describe part of the movie-making process. Ostensibly, it’s the beginning of the process. But to get back to Peru, and the people who think about time in a way that puts the future behind us and the past in front of us, I will tell you that I believe cinema is a time machine. By cinema, I mean the act of watching movies, imagining movies and making movies. I believe that when an audience watches a movie they are collaborating in the making of that movie, even after everyone who filmed it and everyone on the screen is long dead. A movie allows its audience to travel back in time and an audience allows a movie to travel forward in time. And the more I search to understand where my ideas come from, the more I find myself traveling both forward and backwards in time and wishing I had the capacity to understand quantum physics.

So there’s the “what” — the ideas of a film and where they come from — and there’s the “how.” They are inextricably entangled.

Back in 2016, I was traveling to film festivals with a movie that had taken me many years to make. Made of footage I had shot as a cinematographer for many different directors, Cameraperson explores how filming challenges me as a person. The experience of making the film and showing it to audiences was catalytic. While I had no idea what I wanted to make next, I only knew how I hoped to make it.

Here’s what I wondered: Could we invent a way to make a movie that would ask everyone who
was a part of it to grapple with their own relationship to death, and as a consequence it would offer back to them their own love of cinema as a form of solace and respect?

(I can only shake my head now to think that this impulse somehow led me to make a film in which I cinematically “kill” my father over and over. R-E-S-P-E-C-T.) 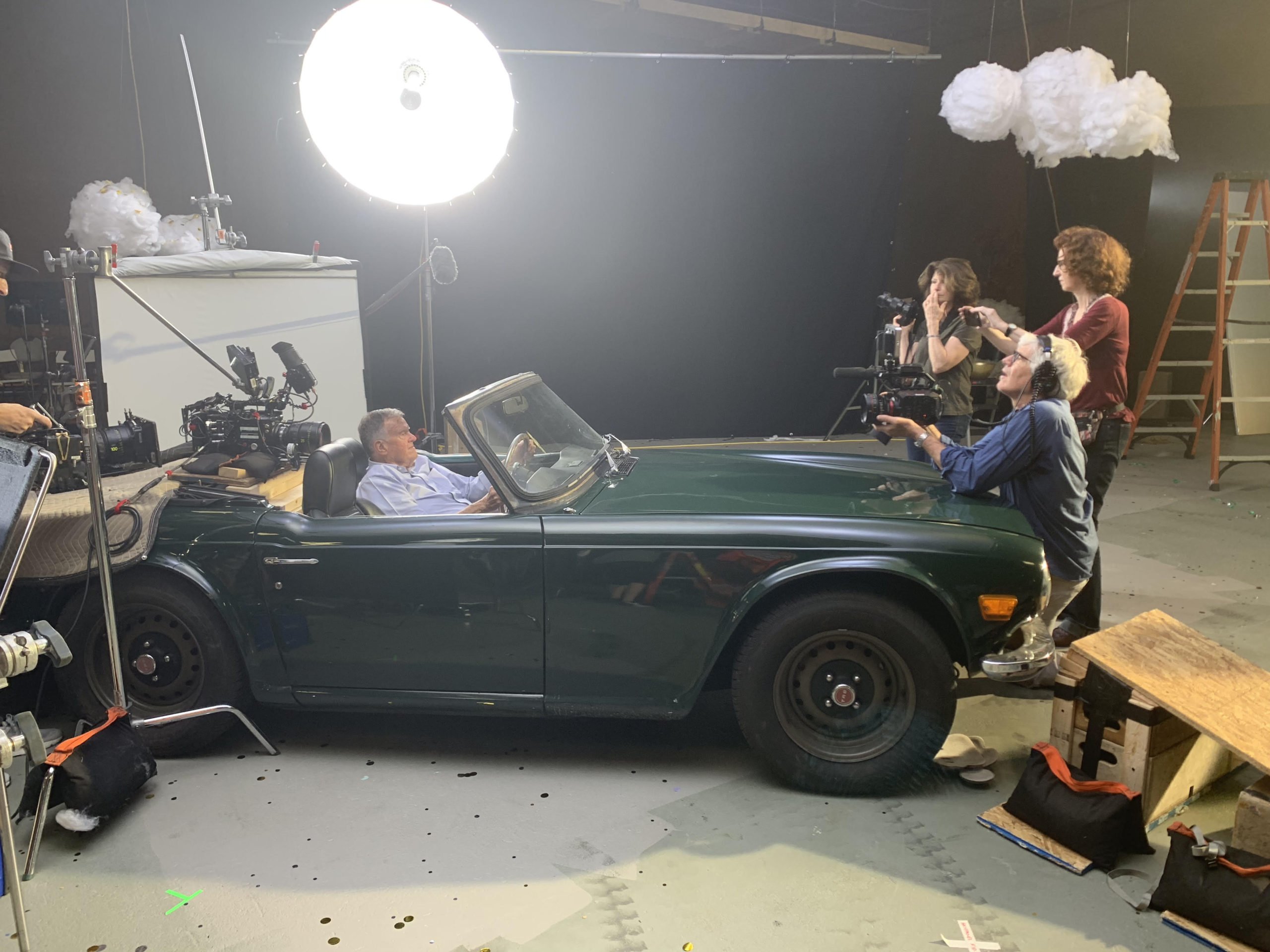 Making Cameraperson liberated me in so many ways. The extraordinary collaborations with everyone on that film made me believe that if I gathered trusted collaborators close again, we could put a process into motion that would help us imagine and make a new film. I felt freed from the impulse to pretend to know anything. When we were cutting Cameraperson, its editor, Nels Bangerter, would say, “We have to build it so the audience can learn how to watch the movie from watching it.”

Making movies is all about building. The question is how do you build trust? As a cinematographer, you learn that sometimes trust takes years to build and sometimes it’s miraculously instantaneous. The other thing camerawork teaches you is that even grant applications is a long game of confronting the profound question, “Does the world want or need this thing I hope to make?” To have stamina for it, I must think of writing an application as an opportunity to understand more about what I am trying to do, whether I get the grant or not.

Since its inception, the Art of Nonfiction program at Sundance had intrigued me because of its support of formal innovation in documentary filmmaking. So in 2016, just when I was thinking about the how of what I wanted to make next without knowing the what, they offered me the chance to present an application unrestricted in form. I jumped at it. For years, I have collected images into notebooks. There is no organizational order to them — they are simply ongoing accumulations of images which make me feel things. They are paper versions of the ways I encounter the unexpected when I am filming. The notebooks have plastic sleeves so I can pull the images in and out and move them around. Working on the application, I went to the notebooks. I composed the application in the form of a visual hand-written letter, using the images to generate and flesh out ideas. The images opened worlds that my words could not. Since the application wasn’t for public consumption, I allowed myself to use images that I hadn’t created myself — I included images of Buster Keaton, a write-up from a festival catalogue about Melba Williams’ film about her father, an old postcard of a nice floe, and a polaroid of my father sleeping with a magazine draped over his face. Now, when I look back, I can see that my brain was developing the idea of Dick Johnson is Dead before I was consciously aware of it. The ideas were sneaking up on me from behind.

After writing that application, I had a dream. I saw a man I didn’t recognize in an open casket. He sat up and said “My name is Dick Johnson and I’m not dead yet!” It was such a vivid wake-up call. My brain was telling me that my dad was running out of time. That dream gave me a cinematic idea of what to do about it. Could I stage my father’s funeral in the presence of his friends, in the church he had attended for 50 years, while he was still alive?

I went to Marilyn Ness and Katy Chevigny at Big Mouth Productions, with whom I’ve collaborated many times, including on Cameraperson. As well as both being immensely talented directors, they are deeply experienced producers. Marilyn compliments my abstract tendencies with her proactive and far-ranging intelligence about how to make meaning through reliance on incremental strategies. Katy knows from years of producing that she wants to lead teams and projects that treat all collaborators with respect, and she knows I trust her to fight for these values—and I believe her when she tells me about the constraints a project is facing. I knew they would laugh with me and understand the
depth of my anticipatory grief.

I talked to Judy Karp, the incisive sound person I’ve shot with for years, as well as fellow and beloved camera- people Nadia Hallgren, John Foster, and Andre Lambertson. I went to Nels Bangerter and simply the thrill of hearing him laugh made me want to get back in the edit room with him immediately, even though we didn’t have any footage yet. We grappled with the ways documentary and fiction might confront each other in our effort to play with and face the unexpectedness of death.

Michael Moore: Trump May Be Lying About COVID-19 Diagnosis
What American Murder Left Out, According to Director Jenny Popplewell