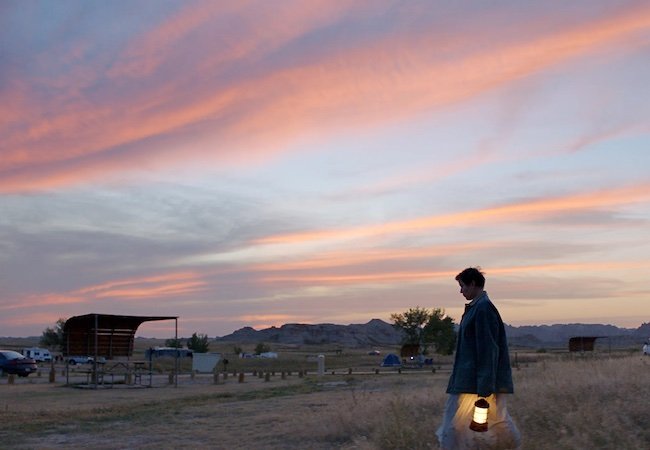 In today’s Movie News Rundown: Meet the woman who makes cinematic forgeries for Wes Anderson and Steven Spielberg; Johnny Depp takes another loss in his “wife beater” case; Nomadland looks unstoppable on its way to the Oscars. Plus: A brand-new trailer for the Oscar nominated short Two Distant Strangers.
But First: Evan Glodell has spent 17 years learning the secret to indie filmmaking happiness, and the director of Bellflower and Canary explains it at the very beginning of this video:


The Forger: Graphic designer Annie Atkins designs things like bookmarks, wine labels and French bus-stop signs for directors including Wes Anderson and Steven Spielberg. They may only be onscreen for seconds… but need to be exactly right. Here’s Margeaux Sippell on how Atkins became a master of cinematic forgery.
Nomadland Wins: The Chloé Zhao film picked up even more Oscar momentum by winning the top prize at last night’s Producers Guild of America Awards. The award went to producers Mollye Asher, Dan Janvey, Peter Spears, Zhao, and Nomadland star Frances McDormand. It was also a great night for Soul, The Crown, Schitt’s Creek, The Queen’s Gambit, The Last Dance, and more. Congratulations to all the winners.
Johnny Depp Loses: A British court turned down the actor’s appeal in his libel case, in which he sued a tabloid that described him as a “wife beater” in his marriage to now his-wife Amber Heard. Judge Andrew Niccol ruled that the accusation was “substantially true.” Deadline writes: “This is a significant blow for Depp. After the initial trial, he was dropped from Warner Bros’ Fantastic Beasts franchise… and he is now tarred with the ‘wife beater’ brush ahead of his blockbuster defamation trial against Heard in the U.S. next year.”
Flashy New Dad: The Flash’s father just became a little less smirkily mischievous and a little more sardonically lovable. Ron Livington will replace Billy Crudup as super speedster Barry Allen’s dad in the new film The Flash, The Hollywood Reporter says.
Two Distant Strangers Goes to Netflix: The Oscar-nominated live-action short, which we wrote about here, is going to Netflix on April 9. It follows a young Black artist (Joey Bada$$) who is repeatedly murdered by same white cop, in a bitter spin on Groundhog Day. The film going to Netflix is great news for all short filmmakers if it opens the floodgates to more Netflix shorts. “Two Distant Strangers tackles a tough subject for everyone, but in an effort to forge a new direction in the conversation,” say directors Travon Free & Martin Desmond Roe.  “And now having Netflix come on board to bring that message to millions is an incredible opportunity. Here, for the first time, is the trailer: