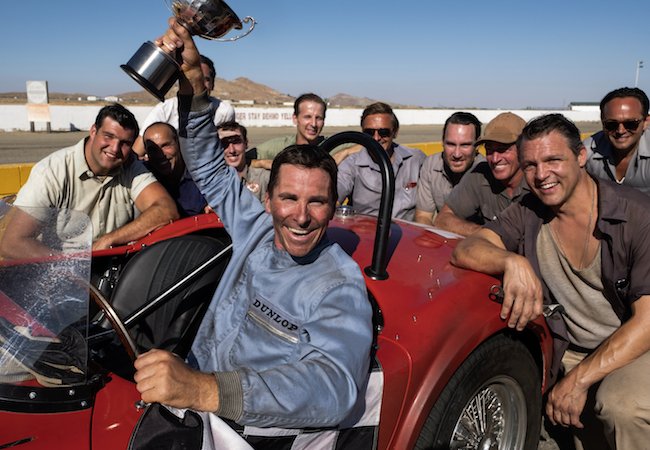 For our 2020 Complete Guide to Making Movies, Ford v Ferrari cinematographer Phedon Papamichael shared his techniques and reflected on the need for a human touch behind the camera. Here’s what he said.

The way I see cinematography, and moviemaking in general, is how I see life: If you don’t have a point of view, you probably won’t have anything interesting to say. Your point of view is an accumulation of everything you’ve experienced in life. So any “Complete Guide to Making Movies” must begin with who you are as a person.

I was always drawing from an early age. Initially I wanted to be a painter, and then an industrial designer. One day, in a ski cabin while everybody in my family was asleep, I picked up a Super 8 camera that I saw lying on the table. I still remember the moment I decided to pick it up: I was fascinated with framing. I started walking around the ski cabin at night, making my own impromptu movie in shots, just walking around and framing things up. I was instantly in love.

I asked my mom to buy me a Super 8 camera and I got one for my next birthday. I shot and edited a bunch of movies and tried to sync music to them by stopping and starting a cassette player as I played back my footage. I realized quickly that Super 8 wasn’t a high-quality format and transitioned: I bought my first 35mm still camera and delved more seriously into photography. I wasn’t a professional still photographer, but I did have some pictures published in magazines.

My turning point in becoming a cinematographer—and not a photographer—was when I saw Jean-Luc Godard’s Le Mépris (Contempt in English). Raoul Coutard shot it in widescreen Cinemascope color. It starred Brigitte Bardot, Jack Palance, and Michel Piccoli, and Fritz Lang played himself in the film. I was fascinated by the film’s long, lateral camera movements, its many wide-shots, the symmetry of its framing, and its very graphic nature. It actually resembled my still photography work, which consisted of graphic primary color surfaces and shadows and textures on walls in a similar style. This was the first time I wrote down a cinematographer’s name.

I don’t consider myself a craftsman at all. I barely know where the on/off switch is on my camera and I don’t know anything about gamma curves, nor do I care about any of that. I want to focus, here, on the human aspects of cinematography. You can always learn the technical aspects by reading and practicing them, but it’s the non-technical aspects that make you a good moviemaker.

I tend to work with directors who have the same humanist approach toward moviemaking. With Alexander Payne, for instance, there’s no pressure: You love going to work and everyone is in harmony. Enjoying a good dinner and a bottle of wine with your crewmembers is every bit as important as the other aspects of prep. The goal is to understand how your collaborators think about story and character—about being human.

In Europe, where I’m originally from, things are a little different because we all think of ourselves as moviemakers: The director is a moviemaker and the cinematographer is, equally, a moviemaker. I’ve worked on movies in eastern Europe where the director will be set dressing in the back and I’ll be designing the blocking and laying track. The only distinction between us is that I am there to tell our story visually, but otherwise the director-cinematographer relationship is loosely defined. But when you’re working on a studio picture, you’re one cog in a big machine, and your role and function are much more specific.

Being a director of photography in Hollywood is only 50 percent about knowing your craft. The other 50 percent is politics. That doesn’t mean you have to kiss ass and suck up to everybody, but you do have to know your way around studio people and producers, and that process is different on every movie. There’s no rules for how to approach it. A lot of directors really talk the talk when you meet them, and then when you get on the set they turn out to be complete morons, so it’s hard to know what situation you’re really getting into beforehand. Eventually, though, you can find directors in Hollywood who want to make the same kind of movies you do.

James Mangold and I have become simpatico over the years, and we’ve made five features together—Identity, Walk the Line, 3:10 to Yuma, Knight and Day, and most recently, Ford v Ferrari, a biopic that follows American automotive engineer Carroll Shelby (Matt Damon) and British driver Ken Miles (Christian Bale) as they try to build a Ford racing car that will dethrone Enzo Ferrari (Remo Girone) and his car at the 1966 24 Hours of Le Mans race in France. On Ford v Ferrari, one of our primary visual goals was to bring the audience inside what is essentially a death trap—a small metal box loaded with fuel and going 200 miles per hour, vibrating and loud as hell. On television, auto racing is usually presented with a long lens panning from high up above the action, which takes away the impression of speed. So with Ford v Ferrari, we knew that communicating the speed and intensity of that experience required us to film close, with wide lenses.

We shot the car scenes with a wide variety of angles and approaches, but our hard-mounted cameras—we sometimes used four at once, with wide lenses positioned close to Christian Bale’s face—were our most essential tools to convey the film’s visual grammar.

It was our job to expose Christian to the G-forces, vibrations, and interactive light of the racetrack. Getting his facial expressions amid this action was also key, since his character is often yelling to other drivers who can hardly hear him, rendering dialogue secondary in the Ford v Ferrari racing sequences. When all of your actor’s emotions—including some that are tied to crucial story points—are there on his face, you’ve got to be right there, super-tight, to capture it. Christian’s performance was an inspiration.

Bringing Your Aesthetic to Light

In this way, James and I were reminded of our work on Walk the Line—a film whose “visual grammar” was rooted in the experience of being with Johnny Cash (Joaquin Phoenix) on stage as he romanced June Carter (Reese Witherspoon), as opposed to the experience of being at a Johnny Cash concert in the fifth row. In Walk the Line, our camera is onstage with Johnny and June, looking out to see what they see: the audience. The camerawork is improvisational; if you’re operating in a situation like this, you won’t know which way the actor might move next, or whether a spotlight will smash into the lens. Finding those magical moments is what inspires me as a moviemaker, and that kind of spontaneity became the film’s aesthetic.

Over the years, I’ve found that there’s always one perfect spot for the camera to sit for each setup. (Boom down an inch or two and it just doesn’t feel the same.) At the same time, as a cinematographer, you’re always trying to be efficient: You’ve got to measure these things while taking every other factor into account, and need to know whether or not it’s important for you to fight for a certain framing or movement at any given time. That comes with the experience of making mistakes and learning from them.

James and I have worked with natural light quite a bit, which is how I’ve tended to work most throughout my career. I can trace that approach back to the films I liked when I first started, from moviemakers like John Cassavetes, Robby Mueller, and Wim Wenders. I prefer not to stylize a film too much unless it’s called for. I’d rather not get in the way of the story and keep the visuals as simple as possible. To portray your film’s characters in a way that feels real, it’s important not to distract audiences with fancy camerawork and lighting. Don’t fight natural light—embrace the limitations of your location. Just because your lighting isn’t hyper-stylized doesn’t mean your film won’t be cinematic.

On Ford v Ferrari, we used the ARRI LF—a camera that handles low light especially well. James and I were happy with the contrast, hard sunlight, and the way the whites popped when we combined the camera with period glass. Our approach brought to mind Caleb Deschanel’s cinematography in The Right Stuff, which lends a certain hard-light quality to a sequence in which test pilot Chuck Yeager (Sam Shepard) crashes in the desert. We embraced that we couldn’t control every aspect of our light sources, and the result was beautiful.

A Director’s Cut is a Crew Cut, Too

Of course, not everything is just about James, the actors, and me. You can’t make a film like Ford v Ferrari without your crew, and assembling and leading a crew is an under-appreciated aspect of a DP’s job. What gaffer Mike Bauman and key grip Ray Garcia did on this shoot was amazing. We made the film in 64 days, and their skill, dedication, and solidarity during that time made it possible. I’ve worked with some of my lead crew people on more than 30 films, and any success I’ve had is theirs as well. It’s essential to have crewmembers you can trust and depend on.

A movie is made in a hundred different ways. You can give the same script to 100 directors and 100 directors of photography and you’ll get 100 different films. Despite our best efforts, moviemaking is a human endeavor and it doesn’t always turn out perfectly. Ford v Ferrari is the combined result of hundreds of smart, experienced moviemakers working toward the same goal and believing in the vision of its director. It’s the result of countless conversations, arguments, laughter, and tears shared over many years. And it’s those human aspects that make moviemaking such a satisfying undertaking. MM

Joe Russo Reveals How Breaking Bad Influenced Avengers: Endgame
Taylor Russell on Waves and Why She’s OK With Being an Adult Who Plays High School Students