The Structure of Musical Screenplays

Musical scripts are structured just the same as one would write a regular feature screenplay—except now, you have to figure out where to fit your musical numbers. It is the placement of the musical numbers that is key.

Rouben Mamoulian, the original stage director of Oklahoma and Carousel wisely said, “It’s the basic law that the music and dancing must extend the dialogue. If you say the same thing in a song you already have said in the speeches, it’s without point … a song must lift the spoken scene to greater heights than it was before, or the song must be cut no matter how beautiful [the melody is]. The song must not merely repeat in musical terms what has already been put across by the dialogue and actions.”

You need to find places within your screenplay that call for emotional elevation. Go to your favorite musicals, watch them, and see where those songs are positioned within the structure of the story and character arcs.

It’s about finding the perfect balance of when to use musical numbers and when not to use them. You don’t want to have too few and risk the notes asking “Does this need to be a musical?” At the same time, you don’t want to have too many and risk the notes saying “The musical numbers are saturating the script and taking away from the story and characters.”

Structure the stories like you would in any screenplay, but carve out key positions where you will place those musical numbers.

How to Format Musical Numbers Into Screenplays

The key question that most screenwriters looking to write musical numbers into their screenplays is formatting, and it is a difficult question to answer without contradictions arising.

There are a few different ways to tackle the formatting issue. Each way has its pros and cons. To start, you have to think in context of how you are writing the script, who you are marketing it to, and how you will be marketing it to them.

Are You Just the Writer?

Most people that have worked on musicals will tell you, “Screenwriters write the screenplay, lyricists and composers write the music.”

If you’re just a screenwriter that is trying to sell a musical on spec, and you have no desire or experience to compose music or direct, it truly is a more difficult venture.

Are You Partnered With a Lyricist, Composer, and Director?

If so, pitching the project will be much easier because you are part of a full package.

Damien Chazelle was partnered with his childhood friend Justin Hurwitz, who composed the music and wrote the songs for La La Land.

Your collaborative situation will help dictate how the screenplay should be formatted. The locations, scene descriptions, character names, and dialogue will be written and formatted like any other screenplay. The key difference is how the musical numbers are displayed.

Chazelle was already partnered with a composer, so a majority of the songs came pre-recorded for the pitch in the form of temp tracks (existing pieces of music directors use as templates for mood and feel while in production). Chazelle was already an in-demand director due to his indie-hit Whiplash, so the process of sending the music tracks along with the script allowed them not to have to worry about writing in the lyrics and musical number directions within the format of the screenplay itself.

Let’s take a look at the first couple of pages from La La Land as an example of how simple this process is:

You’ll also notice that there are no song lyrics and singing character names within that sequence. Instead, Chazelle references the songs by particular tracks and track titles. This points to the fact that the people reading the script also had an accompanying CD or digital playlist to reference. This type of formatting is specific to those that will have the ability to get pre-recorded music into the hands of the powers that be considering the script.

While those of you writing musical screenplays on spec can attempt to go the same simple formatting route, remember that it’s hard enough to get someone to read your script, let alone have them listen to demo tracks. It’s not impossible, but if we’re being honest here, it’s highly improbable that those you’ll be shopping the script to will both read and listen to it.

That is, if you have the temp tracks to forward. If you don’t, you’ll have to resort to the option of including the lyrics, with character names singing them, within the format of the screenplay.

Let’s turn to the classic animated film Beauty and the Beast for our first example of this formatting method: 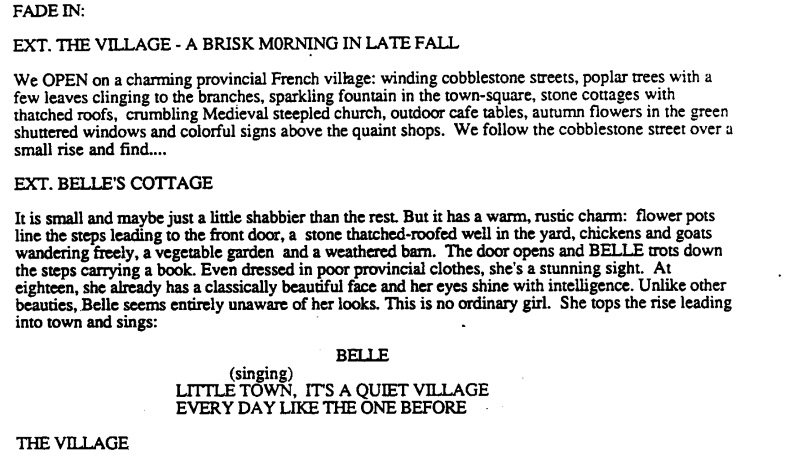 The Beauty and the Beast screenplay fully lays out the songs and their singers with screen direction, while retaining a degree of simplicity. The actions of the musical number are written in standard format. In this case, italics are not utilized to differentiate, although keep in mind that this screenplay was written and developed for Disney almost 30 years ago. If you’re writing your script on spec, you may want to utilize italics like the La La Land script did, just to offer a smooth read.

With the lyrics, the script initially used parenthesis to first dictate that Belle was (singing). From that point on, the screenplay simply formats the lyrics in FULL CAPS, written in the standard lyric format of having one single line denote one sung line. This is as opposed to the format for standard dialogue, in which lyric lines run together in blocks, separated only by periods, question marks, and exclamation marks.

This type of format allows the reader to experience some of the song. We say some, because the musical composition is missing when you get just the text. That’s where this format falters. Reading a musical script without the music can be a long and arduous experience. That is why it is so difficult to sell musical features on spec.