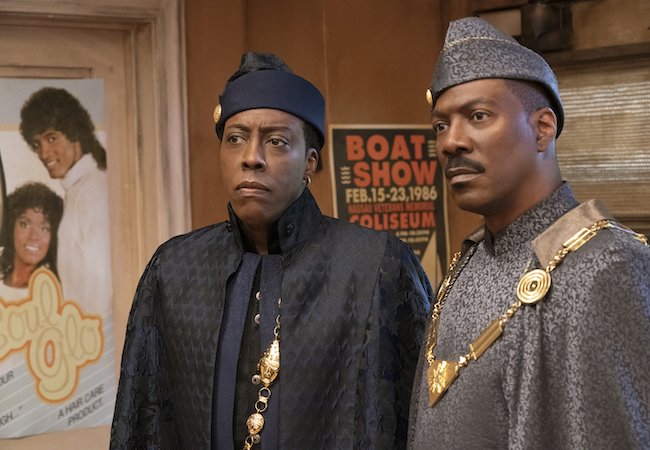 In today’s Movie News Rundown: Coming 2 America director Craig Brewer knows you might be leery of a sequel; Liam Neeson will help reopen NYC theaters; women of the road.
But First: How a fake white salamander failed to defeat Mormonism.
Wandering: Frequent MovieMaker contributor Emma Myers wrote this typically insightful piece for The Baffler on Nomadland‘s place in cinema’s history of wandering women. “If a woman is wandering, it usually means she’s had to give something up — a home, a family, a husband — or that she herself has been abandoned,” Myers writes. “Even when she has no possessions, she’s almost always hauling baggage.”
Coming 2 America… Skeptically: Coming 2 America director Craig Brewer says he’s well aware that many fans don’t think there should be a Coming to America sequel — and says that helped keep standards high. Amazon Prime released the film yesterday, a day early. It’s fun.
Also: Brewer talks thoughtfully in the interview about his responsibilities as a white director who often works on films with predominantly Black casts. “The best thing that I’ve come to learn with filming with themes and with culture, specifically African-American culture, is you’ve just got to be OK with just being in service to it and empowering as many artists around you as you can to let them do their thing,” he says.
Pass the Mic: SCADFILM and the Walter O. Evans Center for African American Studies are hosting free panels today called Pass the Mic: Multicultural Representation in the Business of Film. The discussions will focus on best practices in marketing multicultural films and ethics in representation, among other topics. You can sign up here.
F9 Delayed a Month: Remember earlier this week when said the new Fast and the Furious movie would be out in May? It’s been pushed back a month, to the disappointment of all adult Americans. Here are some details from Variety.
Meet Liam Neeson: If you live in NYC, that is. The Hollywood Reporter says he’ll bring his very particular set of skills to the AMC Lincoln Square theater this evening to thank people who turn out for his new action film The Marksman. Theaters will finally open today with strict safety guidelines, and these guys will definitely be there, too: