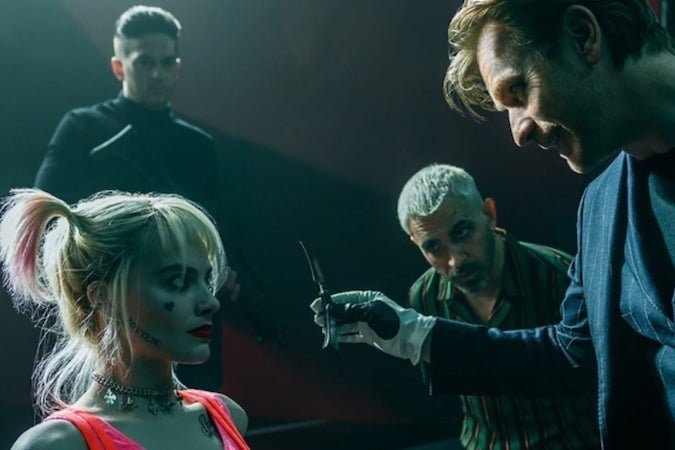 Birds of Prey writer Christina Hodson and director Cathy Yan both listed the 1971 dystopian film as one of the influences on their story, which stars Margot Robbie as the DC antihero Harley Quinn. (Robbie also produced Birds of Prey.)

“Early on, Margot and I — our references for this movie were super weird,” Hodson said. “We just did a lot of watching of movies that we liked, and one that came up early, just because the essence of it was so cool, was Clockwork Orange. We kind of just liked the anarchy and the danger and that gang — obviously they are a very, very dark gang.”

She added: “But I kind of just liked how radical it was. … We wanted that underworld of Gotham to have that slightly weird, surreal feel.”

The Birds of Prey script specifically references Clockwork Orange‘s Korova Milkbar, where Alex (Malcolm McDowell) and his droogs retire and refuel after their vicious attacks on helpless Londoners.

Yan said the visual references come up specifically in the nightclub that serves as the headquarters of the villain Black Mask (Ewan McGregor).

McGregor starred in Trainspotting, one of the other movies that was on Hodson and Robbie’s pre-Birds of Prey viewing list. 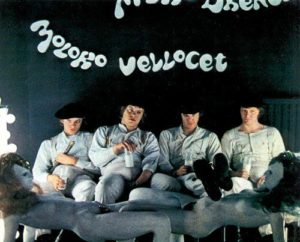 The Korova Milk Bar in A Clockwork Orange.

“One of the trippiest moments was — because Clockwork Orange had been a very, I’m talking way-back-when influence, and also Trainspotting, way way way back when — on the very first day of shooting, it was like six in the morning, I’d walked through the studio — it’s still dark and there was fog everywhere — and I walk onto the soundstage and it’s the Black Mask club, which has a very heavy Clockwork Orange influence, and Ewan McGregor, standing in the middle of the set. And I’m like, this is such a dream… to have those two things suddenly come together just felt like kismet.”

She talks more about the cinematic influences on Birds of Prey on the MovieMaker Interviews podcast, which you can delight in right here:

2:34: How Hodson and Robbie set out to tell a different kind of comic-book story.

5:45: The benefits of collaboration.

12:00: How much does Birds of Prey fit into the DC Universe?

16:10: Why are female directors better represented in comic-book movies — this year — than in movies overall?

19:00: “I love writing action and I love writing specificity in action. To me, you can tell so much about a character by the way they fight.”

Birds of Prey, directed by Cathy Yan and written by Christina Hodson, is in theaters now.

Year on Fire: How Claire Mathon Shot Portrait of a Lady on Fire and Atlantics
Horse Girl Creators Alison Brie and Jeff Baena on What It Means to Be a Horse Girl