The Yard Dogs Road Show has traveled the country and Europe as a thirteen-member band/circus/family/cabaret that featured a variety of performances including vaudeville, burlesque, tribal rituals, beatnik poetry, and other gypsy-like performances. The band has always been a fusing of different forms of art together and their eponymous documentary is no different.

The film opens with a chaotic mixture of mediums that rival the elaborate performances of the band. With Super 8 footage combined with photographs, film, audio recordings, Hi8, and a narrative structure from Zebu himself, the film begins as a comedy that’s consistently plagued by tragedy, a blend of honesty and fabrication. “That definitely made it more time consuming but much more interesting because we had multiple textures to incorporate,” says Zebu. “That was our style in general; we mashed a bunch of eras together as a band. You make it with what you have, and that’s who the Yard Dogs were.”

Even before they made music, Yard Dogs Road Show was an experimental film in the making. “Before the band even started I had a cable access show,” Flecher, the director of the film and another founding member, states. “Along the way we were shooting skits and material and the band formed in front of the camera. And for the next eight years I was just filming. It was another way of making art along the way. About eight years in I was like, ‘hey, we should make a documentary.’ I stopped myself mid-sentence and said, ‘Oh my God, I’m already working on it.’”

The documentary reflects the band’s journey from the point of view of the individuals involved. But with such a close attachment to the band, the filmmaking process was a difficult one, both emotionally and practically.

“The most challenging part of it was how emotionally connected we were to the material,” Zebu recalls. “We were in the band, we were making the movie, we were creating art, then creating art about the art. When you’re making a documentary about yourself, its very cathartic. A lot of emotions come out and you’re kind of reliving that part of your life over and over again.”

With more than 300 hours of footage “there were a lot of stories that didn’t get told” said Zebu. “We started digging out which stories we wanted to tell and what footage we had to match it.”Flecher agrees. “There were lots of quirky moments between people that was hard to cut up” he adds. And through several re-edits and a variety of influence, the two worked together to trim the overwhelming amount of footage into a concise representation of their journey. 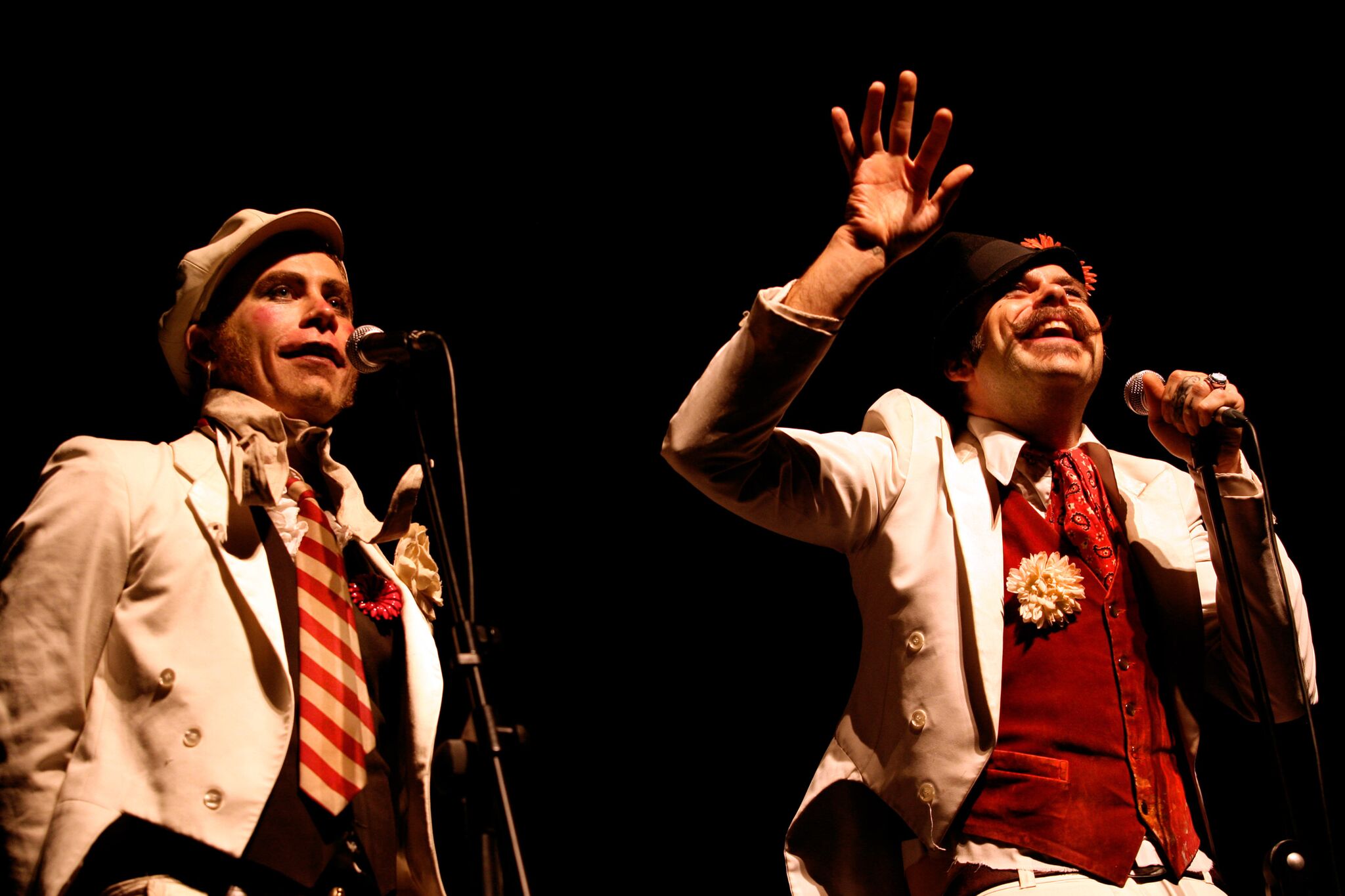 Towards the beginning of that journey, Zebu, Flecher, and Miguel, the third founding member and spiritual side of the band, met up with fellow instigator Ken Kesey and his famed band of Merry Pranksters off the Oregon coast. During their short interaction, he passes the proverbial torch from his generation to their own. For Zebu, the experience was an influential and inspiring one. With massive gatherings turning into all night parties, the influence for their shows begins to take root. “We’d go up there and they’d rent out theaters near Eugene,” Zebu recalls. “And they would block out the front doors of these theaters and the party would go all night where everyone ate a lot of acid. I think what was the most inspiring was their desire to create an alternative reality, create their own reality on their own terms.”

The same inspiration was felt by Flecher. “That was big for us,” he remembers. “We really felt like we were jumping on the fringe of the magic carpet passing by. We were on their ride for a couple days and that was so magical. Linking up our legacy to theirs. It was incredibly inspiring.”

Beginning as a small band with makeshift instruments and a passion for freedom, they started their own tour. With Zebu’s experience hopping trains and Flecher’s unconventional films on skateboarding and other subculture and counterculture subjects, neither one would shy away in taking the leap on the journey. “The minute I got on my first freight train,” Zebu says with a nostalgic smile spread across his face, “I grabbed the rail and it picked me up off the ground and I felt at that moment that I had stepped into my fullest potential in the sense that I was in an alternate reality. That world that exists runs parallel to our society, but it has its own set of rules and its own set of what motivates it and inspires it that’s much different.”

The original members began mixing with the new additions of the band and slowly began pairing off in their respective relationship roles, with Miguel with Emily, Flecher with Vikki, and soon after Phoebe merging with Leighton, the group of Prankster’s morphs into an interconnected web of relationships and emotions. “I learned a lot about myself and family and collaborations,” Zebu states. “There was a development there and I had to learn what I needed to learn in that type of family environment before I could let it go.”

With a continuously growing audience and a desire to share this expression of ultimate creativity and freedom, they began touring on a bus of their own. The burden of this new goal to spread their ideologies comes with rocky terrain. While this journey was intended and founded on the ideology of freedom and pure innocence in a society that is so often plagued by responsibilities, obligations, and the idea of a reputation where whatever you do defines you as an individual, the ideologies they have fought so hard against are now becoming part of their routine. The idea of repetition and practice each day just becomes another job, something from the beginning formation each and every member intended to avoid. By working on this new time schedule, they begin to escape the “now” that they fought so hard to achieve. And while some manage to find the middle ground between hard work and free spirits, other members begin to feel the grasp of reality pulling them back in.

Zebu begins to provide structure for the band working as their manager, a role he never intended to fulfill but simply did out of necessity. But in the same way that he fights for the control, Miguel fights for the unrestricted freedom, often causing a clash between the bands ideologies.

The women of the Yard Dogs. Photograph by Becca Henry Hill

Just as these driving forces are beginning to present themselves, the women in the group begin to fight the forces of their own oppression. Providing a means of protest against the patriarchal system and in the hope of showcasing their own agency, they begin the Black and Blue Burlesque Show, the most groundbreaking act displayed by the group. The women all agree upon their routines, their outfits, and practices in a way that provides a clear means of agency for each of them individually. This act, accompanied by Sansa Alexander Asylum III, a new member to the family, singing a cover of Nina Simone’s “Feeling Good” provides the most honest replication of ideology meeting performance. Their medium fits the message.

With the idea of a European tour beginning to be discussed, they see their opportunity to expand even further. Fans continue to spring up as the word of mouth continues to lead the group toward success. That same success has stayed ever present even after their final show. The film itself was funded mostly from a Kickstarter campaign provided by individual donations. “Most of the project up until we did the fundraiser was funded by me,” Flecher states, “and then for the edit we did a kickstarter campaign where we raised about 25,000 dollars.”

Now with festival gigs and multiple shows each night, the strain between members begins to increase. With an advance toward a mainstream audience, they lose the quirky aspect of small intimate performances that began their journey.

The tension of the film begins to escalate dramatically when Sansa, the voice of Nina Simone, breaks her neck during this peak of the bands creativity. “When Sansa broke her neck and almost died at that festival, it felt like we were in the gutter” Flecher solemnly reflects. “We were so tired and exhausted and then when that happened the drive home was just grueling.” The mortality of all those involved becomes apparent and they are forced to confront this reality they had all wished to avoid for so long.

After Sansa’s recovery, the band reaches their long awaited climax. With tensions stretched as far as they can go, they return to their old stomping grounds and the founding of the free spirited hippie movement, the Fillmore in San Francisco, for their pinnacle show in their journey together as a family.

“I think our biggest peak was at the Fillmore,” Zebu states. “We sold out a big venue and it was kind of iconic. We were part of a lineage of sorts that had started at the Fillmore and the sixties counterculture. We were all children of that.” With a sold out show, Zebu begins to stress the importance of practice while Miguel stresses the importance of freedom. With a lack of concern for time and what is deemed as respect by Zebu, Miguel begins to drift away from the band because of what he believes is their own departure from their original form.

Regardless of success or intent or any way you want to credit or discredit a counterculture movement, the point remains the same. They did it. They experienced it. And as Flecher reflects on his experiences through rose-tinted lenses of nostalgia where hindsight is 20/20, he comes to terms with his journey.

“It’s just so weird because for me it was so many different things,” he offers. “It was the band, it was the filmmaking, it was the group. I wouldn’t change a fucking thing. It was so great, the journey. Its not about the art it’s the process. The process of it all with so much involved. The entire journey itself is the package.”

And when asked if there is any advice he could give himself now, looking back on his experiences, he states, “If there’s any advice I could give to anybody about to start that journey, I’d just say have a good time. To take that journey and make sure to jump on that train, I cant imagine not doing it.”

First Draft: One Secret to Great Dialogue? Make Your Script’s Silences Count
The Intimate Epic: Directors Alex and Andrew Smith on the Quiet Intensity of Father-Son Drama Walking Out