On a rainy day in New York, book publisher Hachette decided to halt publication of filmmaker Woody Allen’s memoir Apropos of Nothing. The book had been attacked by his adopted daughter Dylan Farrow, who accuses Allen of molesting her in the early 1990s, and by Allen’s estranged son Ronan Farrow, a Pulitzer Prize-winning investigative reporter.

Farrow’s book Catch and Kill, about his work exposing film producer Harvey Weinstein’s serial abuse and rape of women over decades, had been published by Hachette imprint Little, Brown & Co. The Allen memoir was being published by a separate imprint called Grand Central Publishing. Farrow presented this to the public as his publisher betraying him by going into business with Allen, though it’s usual practice for imprints within a large publishing house to operate as separate businesses — they have been brought together to exploit economies of scale, but are meant to maintain editorial independence since their contribution to society is the dissemination of diverse ideas and art.

Farrow objected that Grand Central had not-fact checked the book, his evidence being that nobody from the publisher had contacted Dylan to discuss whatever Ronan presumed Allen to have written about his sister or their family. Surely, an honest Allen memoir would have dealt with the director’s split from actress Mia Farrow, the abuse allegations, and his relationship with Soon-Yi Previn.

As nobody outside of Allen’s circle and Grand Central have seen the book, we can’t know what he’d written, but given that he has denied the abuse allegations consistently for nearly 30 years, we can assume his side of the story would not have changed.

Memoirs are not typically rigorously fact-checked, except for potential libel. While these books sit on the non-fiction shelves of bookstores and libraries, readers understand that they are the product of an author’s self-assessment and that the standard of truth is nowhere near as rigorous as would be applied to journalism like Catch and Kill. Still, Farrow’s complaints were circulated widely in the news media and received enough attention that Hachette employees decided they should take up Farrow’s fight.

On March 5th, around 75 Hachette employees staged a walkout. One protester, interviewed anonymously by Slate, simply dismissed Allen as a pedophile. At one point, the interviewer asked, “Do you see any value in publishing the book?” and the employee responded, “I do not. Perhaps [Allen] still has fans, but I don’t think any of that matters in the slightest considering the things he’s been accused of doing.”

The employees demanded an apology from their boss and cancellation of Allen’s contract. They not only won, but were presented by media outlets like Slate, Vox, Vanity Fair and LitHub as heroes for successfully suppressing the publication of a book.

Readers, who may well have vindicated the Farrows by not buying the book in April, had no voice.

Those who don’t want to see the book published believe Dylan’s repeated assertions that Allen abused her. She says the abuse occurred one day in August 1992 and followed a pattern of inappropriate attention. No one but Woody Allen and Dylan Farrow knows what, if anything, happened. We do know that Allen was investigated at the time of the accusation but never charged. He was denied custody of his children by a judge who cited the accusations.

Allen has argued that for the accusation to be true, he would have had to have done this horrible thing exactly once, in his mid-fifties, in the house of his former girlfriend Mia Farrow, with people present, a day before a public custody battle was to have been resolved with a shared custody arrangement. He has also argued that Mia Farrow coached her daughter to make the accusation because she was angry about his affair with her (but not his) adopted daughter, Soon-Yi Previn. (Allen and Previn have been married since 1997.)

In his 1994 film, Bullets Over Broadway, Allen grappled with the issue of “the artist vs. the man,” by portraying a brutal mafia hitman as a brilliant playwright. His conclusion was that humanity matters more than art. By his own standard, if he’s a pedophile, he should be dismissed, no matter how good his art.

But the evidence of his pedophilia is so scant it can barely be said to exist. There was a claim, it was investigated at the time and with vigor, and it all led to nothing. A prosecutor said at the time that he could have charged Allen, but he didn’t. There was no case.

Any mention of the evident censorship is met quickly with the response that the First Amendment guarantees no one a book contract. But the First Amendment is just the subset of free speech that defines the federal government’s obligations. The concept of free expression and a free society is much larger than the constitution can capture, it’s something that has to be embraced by culture and society.

Private interests legally censor speech and expression all of the time. Online forums like Reddit, Facebook and Twitter that started out as unfettered free speech zones now have rules, content reviewers and, yes, censors. Every election cycle, and it will be no different this time, employees find themselves fired or censured for expressing political opinions that offend their bosses. It’s legal. The boss can tell you to get that bumper sticker out of the company lot, and the Constitution is unbothered.

But free thinking people know enough to condemn such power plays. If coercing people into silence by threat of unemployment isn’t censorship, then the word has no meaning.

Over the last year, an editorial team at Grand Central worked with Allen to write, edit, design and produce a memoir. The publisher then announced the imminent sale of the book to any interested reader. And then Hachette changed its mind to appease people who had not even read the manuscript.

It’s a form of censorship, and we should call it that, even if Allen finds another publisher or prints his own book and hands out free copies in Columbus Circle at dusk. 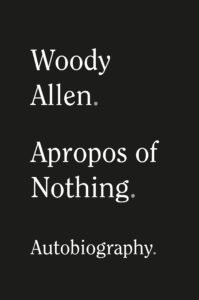 The cover of the upcoming Woody Allen memoir Apropos of Nothing

Of course Woody Allen can get his story out, if he wants to. He can sign up for Twitter and spend his days at it, and some people would listen. But American culture is spread through a marketplace, and let’s not forget that the editors at Grand Central had determined there was an audience for Allen’s memoir and had announced the publication date, which amounts to a promise to any readers who wanted to buy the 650-page book. The length of the book matters because it signals that there’s so much more to Allen’s story than we now know, or than can be explained in a series of tweets, and that this saga with the Farrows may be just a small part of an 84 year-old man’s story and a showbiz career that started in the 1950s. But we may never know, thanks to Hachette’s broken promise.

We also shouldn’t be so sure that the book will find some other way to reach its audience. When Amazon decided not to release Allen’s film, A Rainy Day in New York in 2018, Allen shrugged that the movie would reach U.S. theatres in some other way. While it did play around the world, the closest it got to a domestic release was as an in-flight movie. I saw it in Amsterdam last year. It’s a delightful film that deserved better. Hopefully this book will not share its fate.

Michael Maiello is a New York-based author and playwright who has published with McSweeney’s, The New Yorker, Esquire, Rolling Stone, The Daily Beast and Forbes.