Who Is Serial Killer Peter Tobin From Netflix’s The Investigator: A British Crime Story? 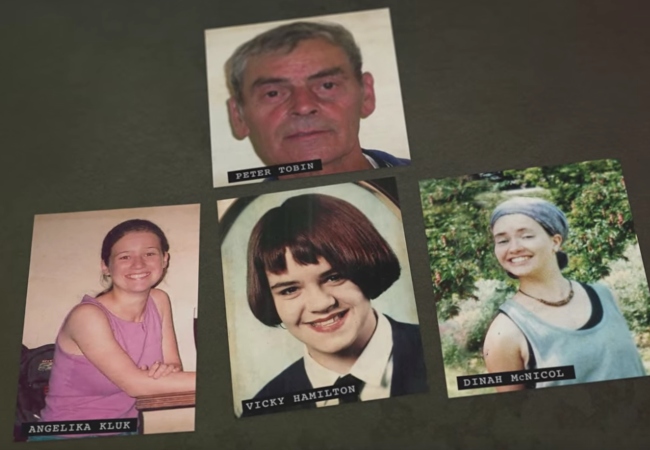 If you’ve seen Season 2 of Netflix’s The Investigator: A British Crime Story, you may be looking for more information on serial killer Peter Tobin.

The infamous Scottish serial killer has been convicted of murdering three women and is currently serving a life sentence in an Edinburgh prison. But investigators believe he may be responsible for many more murders.

As The Investigator host Mark Williams-Thomas notes, he believes Tobin is behind the mysterious disappearance of UK teenager Louise Kay, who vanished after a night out in Eastbourne, East Sussex in 1988.

Tobin was born in Renfrewshire, Scotland in 1946, according to The Guardian. His first wife, Margaret Mountney, details accusations of physical and sexual abuse she says he committed in The Investigator, and says that he often held captive her against her will. According to The Guardian, Tobin’s second and third wives, Sylvia Jefferies and Cathy Wilson, also each fled their marriages and said that they suffered abuse from Tobin.

Although he met Mountney when he was just 22 years old and she was just 17, Tobin would turn 60 before he received his life sentence in prison, according to the Guardian.

In 2006, he was arrested for the murder of a 23-year-old Polish woman named Angelika Kluk who was working alongside him at a church in Scotland. As The Investigator details, Tobin raped and murdered Kluk while they were working together in the church basement and then buried her body underneath the floorboards near the church’s confessional. Her remains were discovered less than a week later, and Tobin was convicted of her rape and murder in 2007.

Also Read: To Make Skater Girl, Manjari Makijany Had to Make It Clear That She — Not Her Husband or Father — Was in Charge

The only other two women Tobin has been convicted of killing are Vicky Hamilton and Dinah McNicol. Their bodies were both discovered buried on Tobin’s former property in Margate, Kent after he was convicted of Kluk’s murder. Hamilton, who was 15 years old at the time of her death, had been missing since 1991. McNicol, who was 18 years old when she died, had also gone missing that same year. Both girls had been picked up by Tobin on their way home after a night out — McNicol had been hitchhiking, while Hamilton had been waiting for a bus, according to the docuseries.

The Investigator also details that Tobin is believed by authorities to have been involved in other murders in addition to the three he was convicted of — one of them being that of Louise Kay, the teenager who went missing after telling a friend she intended to sleep in her car on the beach at Beachy Head in Eastbourne.

However, no link between Tobin and Kay has ever been officially proven. The docuseries plays audio from a police interrogation with Tobin in which an officer asks him whether he’s responsible for any other murders besides Hamilton, McNicol and Kluk. Tobin refuses to answer the question, replying, “I couldn’t give a fuck.”

According to the docuseries, no physical or forensic evidence has linked Tobin to Kay’s murder, although Williams-Thomas says he believes that her body may be buried in the garden at another one of Tobin’s former homes in Brighton, where he lived at the time of Kay’s disappearance. Investigators involved in Operation Anagram, the UK police investigation into Tobin’s crimes, have not yet ordered a search of the property, the docuseries notes.

David Swindle, former detective superintendent of the Strathclyde Police in Scotland, says in the docuseries: “The concerns for me are, how many other victims have met Tobin that are under the ground?”

Season 2 of The Investigator: A British Crime Story is now streaming on Netflix.