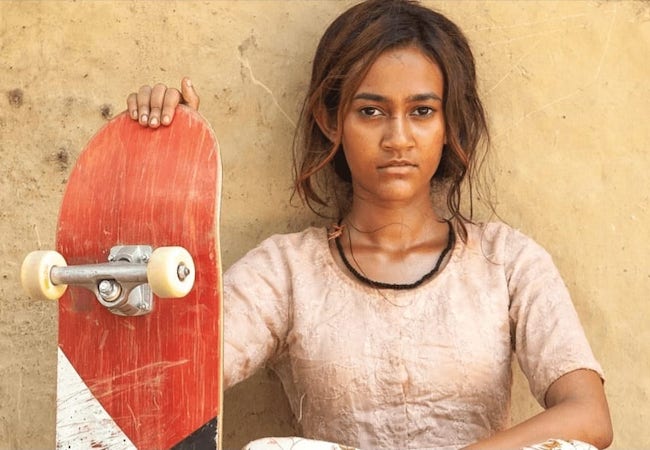 “Who is actually involved? Your father? Husband?”

That’s a conversation that takes place between a woman trying to build a skatepark and a public official in the Netflix film Skater Girl, which follows the story of a teen girl in India whose dream is to become a competitive skateboarder. It’s also one writer-director Manjari Makijany had in real life while building the skatepark for the film.

“Behind the scenes, we were facing the same struggle, because when we were sort of putting, you know, the skatepark together — it was done before the filming, of course — everybody would ask us, ‘Oh, so who’s actually behind this, you know? Is it your father? Is it your husband? Like, who’s — we know you’re doing it, but who’s, like, who’s a male figure behind this?’ And it took them a second to understand that, oh, wait a second, you know, this is being led by two Indian women,” she said of herself and her sister and co-writer, Vinati Makijany.

We spoke to Makijany for the latest episode of the MovieMaker podcast, which you can listen to above or on Spotify or Apple Podcasts.

Her previous credits include working as the assistant director on Mission Impossible: Ghost Protocol and The Dark Knight Rises, as well as serving as a production assistant on Wonder Woman and Dunkirk. When it came to making her feature directorial debut, Skater Girl, she knew she wanted the events to be true to the village where it was filmed.

“Every community, every state in India, has its own sort of subcultures and traditional norms and different caste systems. So it was very important to represent what was happening there in an authentic way and in a very nonjudgmental way,” Manjari Makijany said of Rajasthan, the state in India where she built the skate park and where a lot of filming took place. “I don’t want to be like, oh, here’s a preachy message… it was important for the backdrop to be as clear as we could make it, and a lot of research went into sort of bringing that to the screen… whether it’s gender discrimination, or whether it’s a caste system, or whether it’s just girls not, you know, having their own say, and their own sort of decision.”

Makijany met one of those girls when she was scouting for the film in Rajasthan. She believes she was only 16 or 17 years old.

“She was not allowed to leave the house because she was married off when she was really young, and her husband had left her. And now she couldn’t go out sort of as a single woman because it would bring shame to the family,” Makijany recalls. “I was like, ‘Well, if this was not your case, what would you do in life? What would you become?’ And she teared up and said, ‘Well, nobody’s ever asked me that question before.’ And that just broke my heart.”

After that encounter, she knew she had to build the skate park in Rajasthan.

“I was all the more convinced that this is the village where we need to build a skatepark, because it needs to inspire girls to know that, wait a second, you can dream what you sort of want to pursue and at least have — at least know that you have the option of dreaming and pursuing it.”

Listen to the full interview above. Skater Girl, directed by Manjari Makijany, is now streaming on Netflix.

Guardians of the Galaxy Director James Gunn Reacts to Cleveland Guardians’ New Name
Heist on Netflix: Is Roberto Solis Still on the Run?