When Film Legend Nicholas Ray Made a Student Film… at 61 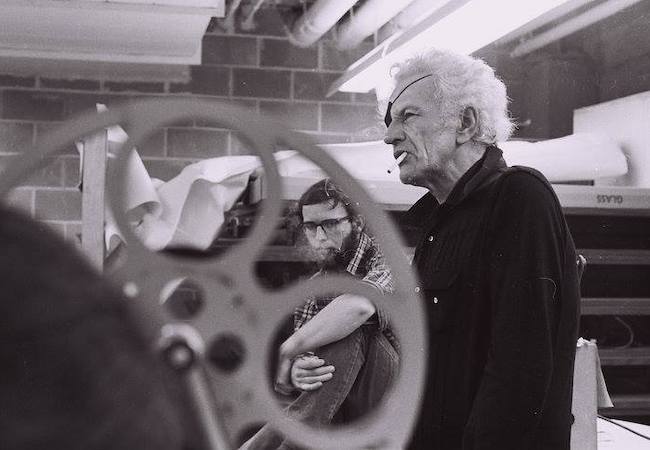 “Cinema is Nicholas Ray,” Jean-Luc Godard wrote in 1957. Ray’s films included Rebel Without a Cause, They Live By Night and In a Lonely Place, in which he directed perhaps Humphrey Bogart’s greatest performance.

But just a few years later, Ray would find himself broke and teaching in upstate New York, in the middle of a wild academic experiment. Ray’s life and final film are the subject of the latest episode of Dan Delgado’s The Industry, which you can enjoy on Apple, Spotify, or above.

“Nicholas Ray was an extraordinary film director whose primary career in Hollywood was extremely brief,” says producer Myron Meisel, who co-wrote a film about Ray, I’m a Stranger Here Myself, in 1975. “He basically made movies from 1947 to 1963. On his last two pictures he was the second-highest paid director in the world, but at that point his career collapsed.”

Meisel notes on the podcast that Ray shared some commonalities with James Dean, his Rebel star.

“Like his avatar, the star James Dean, he flamed out very quickly. But he was a very incandescent filmmaker who really pioneered both psychological depth and visual kinetics at the same time in his films.”

Nicholas Ray didn’t die young like Dean — instead, he exhausted Hollywood with his gambling, drinking, drug abuse, and arguments. And by the late 1960s, he was living in Europe, on the island of Sylt off the German coast.

It was there that two American filmmakers located him.

“They found my father on Sylt, pretty much destitute, and my father agreed to come back to the states,” says Nicca Ray, who wrote the new book Ray by Ray, a Daughter’s Take on the Legend of Nicholas Ray.

He quickly became fascinated with the anti-Vietnam War protests. They landed in Washington D.C., where he got his first taste of the demonstrations. He soon moved on to Chicago, site of the 1968 protests and riots at the Democratic National Convention.

“He came back to the states with these two filmmakers… and he ran around with a camera and just was loving all the chaos and the political unrest and went to Chicago,” Nicca Ray says on the podcast. “And these people who were paying his way thought that he was… shooting film with their film in mind, but really what he was doing was taking their money to go and shoot his own film.”

Nicholas Ray hoped to make a film about the trial of the Chicago 7 — which of course just because the basis of an Aaron Sorkin film. Ray never made his film, but at one point Roger Ebert went to meet with Ray in Chicago — and discovered that he was living in squalor.

Ray was also hanging around with Dennis Hopper at the time, and Hopper helped the director find a teaching job at Harpur College, one of the colleges at the State University of New York at Binghamton.

Nicholas Ray was about to become more enmeshed in youth culture than ever before.

It was at Harpur that Ray decided to teach his film students how to make a film — by making a film. One of his students, Tom Farrell, tells Delgado he asked Ray point-blank:

“What the hell are you doing here, man?”

At one point, the New York Times‘ Vincent Canby visited the school to follow the making of the film. Canby wrote:

Today, at 61, Ray lives with the young people he had earlier to research. It seems at times that he has disap peared into the chaotic world of the film itself, wearing Levis, a dark blue T‐shirt and a light blue windbreaker, and not giving much of a damn whether it’s day or night. (Said one student: “We sometimes work 18 hours at a stretch!”)

And here’s a line a New York Times reporter would probably not write today: “One of the girls in the movie has the round, beautiful, sullen‐sexy face of the young Gloria Grahame.”(Graeme was one of the stars of Ray’s In a Lonely Place — and the director’s wife from 1948 to 1952.)

Our story is just beginning. As Delgado explains on The Industry, Harpur aimed to offer an “experimental” film program, and Ray’s film was one of the most experimental parts of it.

If you like this episode, please subscribe, review it, and recommend it to a friend — the love and attention that everyone involved poured into it will quickly become apparent.

Main image: Nicholas Ray and one of his students, Tom Farrell — courtesy of Tom Farrell.