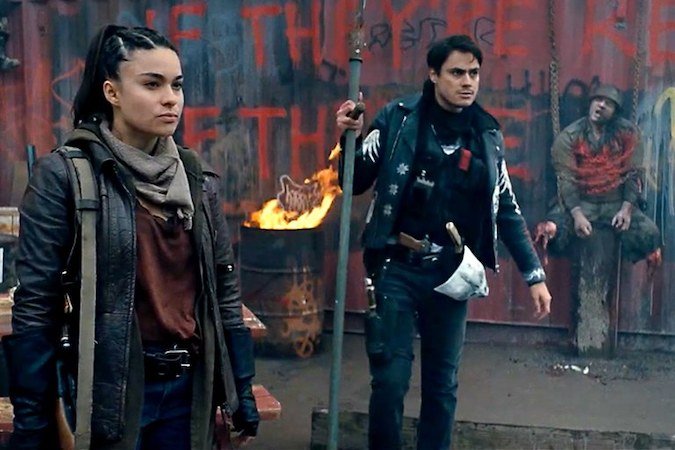 Blood Quantum, the title of the new zombie film from writer-director Jeff Barnaby, is rich with meaning — and ties into the long history of genocide against indigenous people in the Americas.

The film takes place on Miꞌkmaq tribal land in Quebec. When a zombie apocalypse breaks out, the Miꞌkmaq find that they are immune to becoming zombies — but their white neighbors are not. So the whites come to the Miꞌkmaq for shelter, but also pose an existential danger to their hosts.

So the concept of who has indigenous blood and who doesn’t is essential to Blood Quantum — and to the concept of “blood quantum,” which was a concept created by the U.S. government to decide who qualified as a Native American and who didn’t.

“It’s a racial caste system using the amount of racial purity,” Barnaby explains on the latest MovieMaker Interviews podcast. “You have to delegate whether or not you’re going to get enrolled in a tribe. Basically, what it is, is a long-term erasure policy, where any woman or man that marries outside of their tribe loses X amount of percentage in their offspring, until that offspring doesn’t even qualify as a Navajo or a Miꞌkmaq or whatever the case may be. … It’s a long-term erasure policy based on breeding out Native people. That’s essentially what blood quantum is.”

“The idea behind it is less Indians, less treaties to honor, and less land to alot. It’s just another adjunct to what ended up being a genocide,” he said. “You’re erasing Native people, so it’s part of that overall plan of genocide, whatever you want to call it, to get the Indians off the books.”

As you may have guessed, Blood Quantum isn’t just about killing zombies. It’s a cheerfully gore-filled horror movie, but it’s also a meditation on colonialism and capitalism.

You can listen to more from Jeff Barnaby in the latest MovieMaker Interviews podcast, where he also discusses his influences, from Evil Dead to Night of the Living Dead, and how he used and reversed traditional zombie movie tropes. (He also points out some symbolism in Robocop you might have missed.)

You can listen on Spotify or here by pressing the arrow:

Blood Quantum tells the story of four generations: A sheriff named Traylor (Michael Greyeyes) oversees Mi’kmaq land. He and Joss (Elle-Máijá Tailfeathers) have a teenage son named Joseph (Forrest Goodluck) who is expecting a baby with his white girlfriend, Charlie (Olivia Scriven). Traylor’s other son, Lysol (Kiowa Gordon), is a troublemaker who may be right about everything. Traylor’s father (Stonehorse Lone Goeman) provides a link to the past and wields a mean sword.

“The things that the film is talking about are not really black or white,” Barnaby explains. “You could localize the film as just dealing with the colonization of the Americas, but I think when you start looking at it and the trajectory of colonization turning into capitalism you see a much broader picture being painted that expands beyond the politics of Natives and non-Natives.”