“The Best Approach is a Calm Approach”: Welcome to Mercy Screenwriter and Star Kristen Ruhlin on Forging Your Own Moviemaking Path

Kristen Ruhlin knows a thing or two about perseverance. The screenwriter and star of Welcome to Mercy—a trippy dive into the exorcism genre from IFC Midnight—Ruhlin stuck to her guns when crafting the role she’s always wanted to play.

An actor, mom, and full-time producer (she also oversees a complete slate of projects with Stormchaser Films), Ruhlin sat down with MovieMaker to talk horror, motherhood, and forging her own way in Hollywood.

On Her Love for the Horror Genre

I was always a fan of horror films when I was growing up, especially in my 20s. I loved exorcism films from the ’70s that were inspired by more realistic storytelling, like The Exorcist or Rosemary’s Baby. As an actor I wanted to find something like that to be a part of, something that had integrity and themes that were interesting to me. At some point I decided to take matters into my own hands and write it myself.

On Finding the Right Team

I wrote it with a specific exorcism concept that I hadn’t seen in horror films—that’s what interested studios and got me into the position of finally meeting Carey Granat, who was formerly at Walden Media. He believed in me and the project enough to give me a chance to play the role, whereas some of the other studios obviously weren’t as interested in having an unknown actor. I held onto that notion until I found the right home with someone willing to take a chance on me. It took about a year after initial studio interest to find Carey.

We went through a yearlong process of finding the right director. We had a couple of people on board at different times, but I kept having kids and we kept having to push production. So people would be attached, and then they would become unavailable by the time I was available. Tommy Bertelsen was introduced to us by Bryce McGuire, who had previously been attached to direct. We got Tommy in September and we were shooting in December, so it was extremely fast once we finally got it together.

On Making Her Writing Personal

Initially the character of Madaline didn’t have a child, but as I was developing the script with Tommy, we decided to make her a single mom to reflect the struggles that I was going through in my own life, and the relationship I have as a single mom with my children. It adds a layer of reality of context.

On Setting the Film in Latvia

When we agreed to set the film in Latvia (that’s where all our financing came from), we decided to go there, look at the surroundings and see how they affected the script, and then tailor the story to the environment. The Latvian elements added so much authenticity to the whole story and this whole other layer that was really serendipitous. We had ninety percent Latvian actors, and the rest were from the UK. I fell in love with the crew, the people and the place, and I’m going back to Latvia in 2019 to do another film [Shadows on the Grass]. It’s a great place to make movies!

Her Advice to Aspiring Filmmakers

It’s about waking up every day and putting one foot in front of the other. My friend and boss Louise [Linton] and I are faced with challenges every day, whether it’s running into people you have to prove yourself to or putting out a million fires with your family and kids. You just have to take a breath, take a beat, address each obstacle, and tackle and fix them. Don’t stress out—the best approach is a calm approach. It’s the only way any woman or person can achieve their goals. Make that list and tick it off one by one. MM

Exclusive: An Apple A Day Keeps The System Away In This Clip from Vladimir de Fontenay’s Mobile Homes (Video)
How They Did It: Turning Accidents Into Opportunities on Location in New York City to Make Here and Now 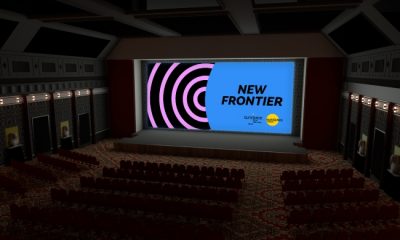