https://www.moviemaker.com/we-make-movies-better-izotope-rx-3-turns-picture-editors-into-audio-editors-by-sam-mestman/"> by Sam Mestman
&BODY=I found this article interesting and thought of sharing it with you. Check it out: https://www.moviemaker.com/we-make-movies-better-izotope-rx-3-turns-picture-editors-into-audio-editors-by-sam-mestman/">

Okay, so full disclosure here: I’m not really an audio guy. I’ve watched a couple of tutorials, and I kind of know how to EQ and apply a compressor here and there. I’m consistently amazed by audio professionals—how the good ones know how to dig in and fix something you didn’t really think could be fixed, and how the really good ones know enough to turn around and tell you when something can’t be fixed, whether the client wants to hear it or not.

Unfortunately, not every project I do allows me to afford a really good sound designer, and a lot of the time I’ve got to go in and mix my own stuff. I usually do it within my NLE (FCP X or FCP 7), and I usually make things worse—until I got my hands on the iZotope RX 3 suite of audio repair tools. I’m now proud to say that I’m officially borderline competent when it comes to audio. It only took me 10 years… and learning how to use a couple plugins.

The biggest issue I’ve always had as a video editor with audio is figuring out how to get rid of unwanted background noise, especially if you’re cutting between takes and one is noisier than the other. You can’t really fix it with EQ, and the noise reduction tools that come with your NLE tend to make your audio sound really tiny, like someone’s talking in a fishbowl. The noise removal that comes with FCPX always sounds kind of off, no matter what you do. And if you’re still working with FCP7, well, you already know that the built-in audio filters are terrible and that Soundtrack Pro tends to be a lot more complicated than it’s worth, even though you can get pretty good results for certain things. I hear Premiere does a decent job with Audition, but it’s not the easiest process and you’ve got to leave the app to do it. With iZotope RX3, you can do some incredible things right in your NLE, and they’re way better than anything you’ll find in any of the programs mentioned above.

If you just need to reduce overall background noise, the denoiser that comes with the standard RX3 package ($350) works great. But if you get the advanced package ($1,199), you get access to the Dialogue Denoiser plugin that is just amazing. That single plugin is probably the most useful I’ve ever owned, and is by itself worth more than the $1,200 the entire advanced suite costs. In FCPX, you go into your audio effects, drag the Dialogue Denoiser onto the problem take, and it will automatically pull a bunch of the noise out of your dialogue. Everything somehow still sounds pretty natural. And while the price might be a bit steep (roughly four times what it costs to pay for your edit software), if you’re not an audio genius, it’s worth it—probably a few times over. I’ve been using the plugins for the last few months, and it’s saved quite a few smaller projects that wouldn’t have been salvageable otherwise.

Now, while the Denoiser is by far the plugin I use most, there’s some other really useful stuff in there. Dereverb is great for matching microphones or dialogue shot in different locations to make them feel like they’re in the same place. You can make stuff shot in a cathedral sound like it was shot in a smaller room. It helps pull out some of the echo you’ll hear in larger spaces. Declip will smooth out audio that peaked during recording, and Declick and Decrackle will pull out a lot of the clicks and pops you hear in recordings. If you want a quick overview of everything in the suite, and before/afters of what it all does, read it here.

Also, there’s a stand-alone app that comes with the suite for really detailed work you need to do on a particular file. For example, if you need to manipulate particular audio frequency, you can do this with the Spectral Repair tool in the stand-alone app. While not as fast as dragging a plugin from your NLE, it provides a lot more control, so if you got serious issues with particular files, just import your audio files directly in the RX3 App, go to work, and then send the finished products into your NLE. You can also use the app to export particular sections of your edit for fine tuning once you’re done with the initial mix, which is mostly how I use it.

I’ll also take a quick second to mention here that these plugins work in Logic X and Pro Tools as well. In fact, these plugins were designed for sound designers, musicians and audio engineers—it just so happens that video editors like me find them useful too.

And here’s another unexpected benefit I’ve found to using iZotope: Because I’m no longer really scared to mix my own audio anymore, I’ve found my EQ and Compression skills have become much better as a result. The fact that I know I have a few plugins that solve the majority of my audio problems has made me look at audio work in a whole new light. I used to feel like I was just a video editor, and all I needed to worry about was picture and smoothing out my levels for a temp mix. When it came to the hard stuff, I would make it clear to clients that it wasn’t my problem, and they needed to hire a professional. But I’ve finally hit the point where I’m no longer embarrassed by my temp mixes, and for a lot of my projects, it’s no longer a big deal to finish right within my NLE. And when I do hire a sound designer, they’ve got to bring their A-game now—because you never want to get out-mixed by the picture editor. MM

For more info about iZotope RX3, including their 10-day free trial, visit their site: http://www.izotope.com/products/audio/rx/ 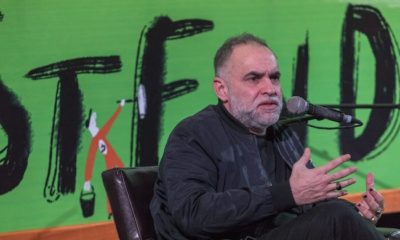 American Psycho: An Oral History, 20 Years After Its Divisive Debut