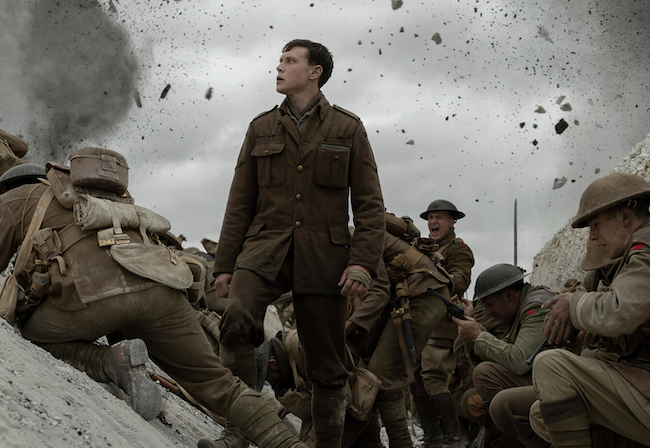 I watched 1917, the Sam Mendes’ World War I epic that appears to unfold in one long, single-shot, in a Regal theater at The Grove shopping complex in Los Angeles. Most people who see 1917 during its theatrical run will see it like I did, with strangers, maybe in a theater in a mall, with the usual distractions.

A young man a few rows back was arguing, not too loudly, with his mom. The guy behind me kept saying “whoa.” Some people came in late. But those weren’t the main distractions—just part of the deal when you go to the movies.

More troubling were some soft blue lights. I was in the front row of the stadium-style seats, behind the floor seats with spaces left open for wheelchair access. The dime-sized, soft blue lights were on the floor, alongside the seats for companions of people in wheelchairs.

I kept cupping my hands at the side of my face so I wouldn’t see the lights. I moved seats twice—once to be closer to the lights, a terrible idea, and once to an open seat near the rear of the theater, where I found myself bothered by some ancillary lights near the projection booth. I was obviously being oversensitive. But the blue lights—and having my attention divided between the blue lights and the epic onscreen—were giving me a headache.

My wife likes to make fun of me for some introverted, princess-and-the-pea-like tendencies when it comes to watching movies. Little noises and side lights—some of them essential lights, I’m sure—drive me nuts. I hate being distracted from the screen.

But these tendencies were never worse, for me, than they were during 1917. I kept wishing for an edit. Or hundreds of edits. And 1917 has almost none that a casual viewer can see.

To be clear: 1917 is beautifully made. It deserves its Oscar nomination for Best Picture. The problem isn’t 1917: It’s me, and my addiction to our distraction-filled world.

It was hard for me to sit and watch a single, unbroken shot. I’m 44. I grew up on fast-cut videos on MTV, and now I spend hours every day on a phone that flashes tweets and text messages and calendar invites. No one forced this on me. As with any addiction, I started off liking these things, but then ended up needing them to function, and now derive no pleasure from them whatsoever.

Movies are my usual distraction from these distractions. There’s almost no other time when I spend two waking hours disconnected from my phone. I should go for my hikes, I know.

It isn’t lost on me how pathetic it is that my main distraction from my tiny screen is a bigger screen. But with 1917, I was filled with unease, because the big screen wasn’t distracting enough.

It’s extremely rare to watch one long, unbroken sequence, because it’s extremely rare for anyone to attempt it. Alfred Hitchcock did it (with a few sneaky edits) in 1948’s Rope. Alejandro Inarritu did it with 2014’s Birdman, and won an Oscar for Best Picture. Alexander Sokurov did it with Russian Ark, which is the only one of the films mentioned here to actually shoot continuously, with no hidden edits.

All of these films used extraordinarily long takes. The ones in 1917 seem to me the most ambitious, because they include explosions, and, in one breathtaking scene, a waterfall. I have absolutely no idea how Mendes and cinematographer Roger Deakins and the rest of the 1917 team pulled it off.

But until the explosions started, it was unnerving for me, with my broken attention span, to stare continuously at unbroken scenes. I’ve rewired my brain to expect constant edits and cuts to the cool parts, the pretty parts, the flashy parts. When we got to the big, explosive moments in 1917, I started instinctively tapping my foot. This was a song I knew. I’d been waiting for it for more than an hour. The endorphin payoff was immense.

Iñárritu told Variety in 2014 that he wanted Birdman to appear as one long, continuous sequence because “we live our lives with no editing.”

But that’s only kind of true. We edit constantly now, using a phone screen as our de facto field of vision. We cut from the great Hitchcock biography we’re reading on Kindle to the Wikipedia page for someone casually mentioned in the book to Twitter—since we’ve left Kindle, now, anyway, time for a break—to the trailer for Black Widow, which someone just tweeted, back to Wikipedia to try to understand who David Harbour is playing, until our friend texts us an article about an acquaintance who seems to be doing well, to Zillow, to try to figure out how much that friend’s new house is worth. Okay: Maybe you’ve bailed out on the “we” at this point.

Re-watching Rope recently (on YouTube, on my phone), I found myself in a pleasant state between awake and asleep. It’s interesting, but also so slow by 2020 standards.

I think 1917 will be divisive, because even in the half-decade since Birdman, our lives have become more edited. More than ever, we choose who we read and what we watch. We aren’t subject to the whims of three television networks and our local theater owner and newspaper publisher.

Dedicating our eyes to one thing, for two hours, requires a surrender we’re no longer accustomed to making. The guy and his mom who were arguing walked out in the middle of 1917, for reasons that may have had nothing to do with 1917.

Did you make it this far? If you didn’t, I understand. Believe me.

Margot Robbie Talks Bombshell
To Live to Sing Director Johnny Ma’s Candid Advice on Getting Film Funding: Hang Out in the Hamptons