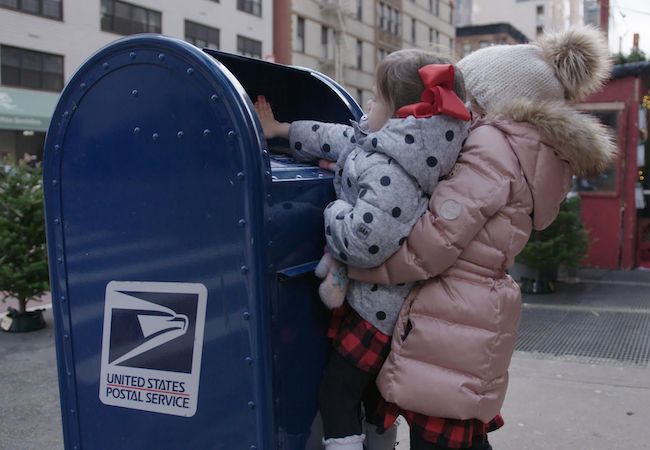 Operation Santa — in which Americans work with the Postal Service and Santa Claus himself to fulfill the Christmas wishes of kids in need — is answering twice as many letters this year as last year.

The doubling may be because COVID-19 has created more need or desire to help. Or it may be because of a new documentary, Dear Santa, that highlights the program. Or a little of both.

Everyone knows that when a child writes to Santa, he and Mrs. Claus and his elves and reindeer get cracking to make sure the child’s wish comes true. What Dear Santa reveals is that for years, Santa has enlisted the help of the U.S. Postal Service’s Operation Santa program, which in turn gets help from everyday, average people like you and me.

It starts when a child writes to Santa at Santa’s address: 123 Elf Road North Pole, 88888. But even if children come close — by writing Santa Claus, or Santa, North Pole, for example, sharp-eyed postal workers add it to the Operation Santa pile.

(If you’re a child or parent, just be sure to write your full name and return address in the upper left corner of the envelope, and add a first-class stamp in the upper right corner.)

What’s next? Santa’s helpers — that’s us — can read through the letters  and choose which ones to answer.

No taxpayer money is involved, Mr. Grinch. Postal workers started the program more than a century ago, and eventually invited the rest of us to join in.

“Making a film about Operation Santa has been one of the best professional experiences of my life and now to see that the program has doubled because of the light that we have been able to shine on this amazing program makes us so happy! We are thrilled that thousands more kids will get their gifts from Santa this year!” Dear Santa director Dana Nachman told MovieMaker.

Anyone and everyone is invited and encouraged to help Santa.

“About 108 years ago, the Postmaster General had a meeting with Santa Claus,” Nachman reveals. “And they talked about the letters that come into the USPS, and could they possibly help Santa fulfill them? And Santa said, ‘Yes, I need all the help I can get. And ever since then, the program’s just been growing and growing.'”

It’s been a hard year for the Post Office, which had added responsibilities with so many people stuck at home, and the current Postmaster General, Louis DeJoy, imposing changes that slowed mail delivery. This is the hardest time of year, most years, due to holiday shipping.

Nonetheless, postal workers add to their own burden, each year, by taking a little of the pressure off Santa.

Dear Santa is now in theaters and streaming. You can join Operation Santa by clicking here to read Dear Santa letters and help fulfill a child’s wish.

And you can listen to our full interview with Nachman on Apple or Spotify or here: