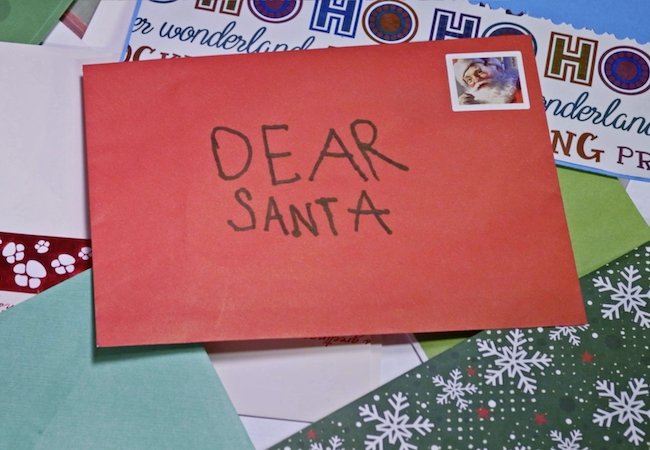 We all know that when a child writes a Dear Santa letter and drops it in the mailbox, Santa Claus and his team of elves get to work making the child’s wish come true.

But how do they do it?

A new documentary, Dear Santa, reveals that for years, Santa and his team have been secretly aided by the U.S. Postal Service, which distributes letters to hundreds of thousands of Americans who, in close coordination with Santa himself, help deliver gifts to children everywhere.

Anyone can send a letter to Santa’s address, 123 Elf Road North Pole, 88888. (Just be sure to write your full name and address in the upper left corner of the envelope, and add a first-class stamp in the upper right corner.)

“In all honesty, they like that to be the address because that’s where Santa lives. But I think for the most part, if they just write ‘Santa,’ it ends up in the right place. I know a lot of kids write ‘Santa, Northpole,” explains Dana Nachman, director of the documentary. “But the main thing that they need to do is put their return address on it. That’s the deal breaker because Santa can’t find their house if it doesn’t say.”

Santa’s helpers — people like you and me — can then read through the letters and choose which wishes they want to help Santa fulfill. Anyone and everyone is invited to help Santa. You can listen to our full interview with Nachman on on Apple or Spotify or here:

No taxpayer money is involved, Mr. Grinch. Postal workers started the program more than a century ago, and eventually invited the rest of us to join in.

“About 108 years ago, the Postmaster General had a meeting with Santa Claus,” Nachman reveals. “And they talked about the letters that come into the USPS, and could they possibly help Santa fulfill them? And Santa said, ‘Yes, I need all the help I can get. And ever since then, the program’s just been growing and growing.'”

Dear Santa uncovers the fact that Santa’s helpers often receive complicated requests — the documentary shows us a little boy who wants 10 Dutch rabbits, and a family that needs a couch.

“The USPS actually has a section of those letters called special requests. And so those are those are different, unique letters that are not like Barbies, or Legos, or iPhones. And those get set sectioned off into a special folder,” she explained.

But the film also shows how normal people — and postal workers — are able to pull off Christmas miracles for even the most difficult requests, with help from an elite team that includes rabbit breeders in Arizona, people in bars in New York, and a little boy who got a wish from Santa decades ago, and grew up to start a charity that fulfills other kids’ dreams.

It’s been a rough year for the U.S. Postal Service, obviously. Postal workers were essential in helping Americans stuck at home get items they needed during quarantines. But the current Postmaster General, Louis DeJoy, imposed changes at the agency that slowed mail delivery — which also led to concerns about mail-in voting in the presidential election.

Nonetheless, postal workers preserved, and the election was held successfully. Now they’re concluding the year by continuing their efforts to help Santa.

“I can only imagine how the postal workers feel after this year,” says Nachman, adding that she hopes the film “gives them a little more pride.”

“I mean, I hope it does, because they deserve it,” she says. “And I don’t know, I just geek out about seeing the the inner, inner workings of the USPS.”

“You know why kids love Christmas,” she says. “But I think why adults love Christmas is because it brings back that childhood magic to them. … Around Christmas time, we all have the opportunity to engage our most creative, most inspirational side — our imagination. And when are we allowed to do that, really, as adults?”

Dear Santa, directed by Dana Nachmann, is now in theaters and streaming. You can click here to read Dear Santa letters and help fulfill a child’s wish.