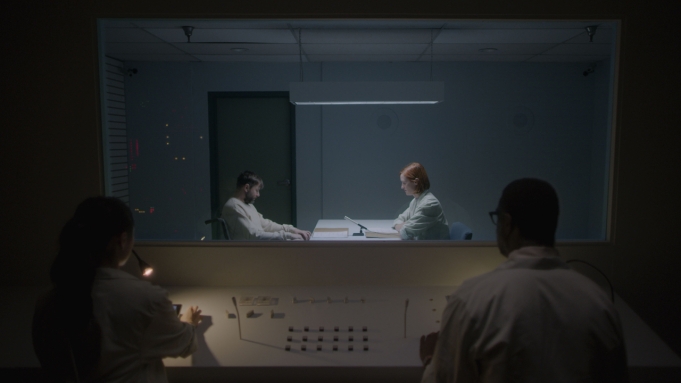 Ultrasound is a complex, stylized sci-fi gem that rewards repeat viewings. With confident direction, a strong visual identity and strong performances from a litany of actors like Vincent Kartheiser (Mad Men), Bob Stephenson (The Chair, Top Gun: Maverick), Tunde Adebimpe (She Dies Tomorrow), and Breeda Wool (Mass) — it’s a surprise to learn the actual production was a decidedly indie affair with a shortened pre-production period and quick shoot.

Conor Stechschulte adapted his graphic novel Generous Bosom into Ultrasound and while his script was ready for some time, once the film moved into pre-production in the first week of January, the small team were shooting in early February.

“It quickly ramped up,” director Rob Schroeder said during a Q&A at the Mammoth Lakes Film Festival this week. It started as just a three man team of Schroeder, his producer and line producer Justin Cyrul, with no actors or other department heads yet attached.

“A lot happened in the two weeks before the shoot, including all those locations, which was probably the most painful part: finding locations in L.A.” Schroeder says.

“In L.A. you can film anything anywhere as long as you go through a locations service.” But that was deemed too expensive so the team instead was literally “knocking on doors.”

Once production began in February, the newly assembled team “shot five day weeks for a total of 19 days,” Schroeder said. But much of the narrative takes place in a research facility — a location the production did not have for 19 days.

“The most expensive location was the facility that was an empty senior living facility. We could only afford that for five days.”

“We shot a good portion of the film in five days. So those were like 10 page days,” Schroeder added.

Actors Chelsea Lopez and Bob Stephenson who play an unhappily wed couple in Ultrasound, were both present at the Q&A. They stressed it was not beneficial to try too hard to wrap one’s head around the narrative at every moment. Instead it was critical to focus on emotion and actions.

“The script is so complex, but for me, it was a lot of conversation with Rob and Conor about what was going on. But I always knew where my character was at emotionally,” Lopez said.

“It really called for me to just jump and be present with the material, for what I knew it to be,” she added.

“You have to just think about what you’re doing in the moment,” Stephenson said. “Because if you think about the whole world, I can never figure it out. So just had to, like pay attention on the activity I’m doing at that moment.”