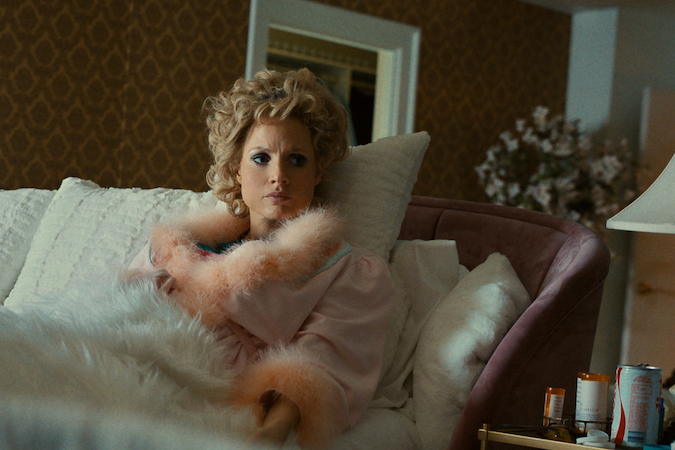 The Eyes of Tammy Faye director Michael Showalter believes America’s longstanding fascination with televangelists and charismatic leaders has to do with the nation’s Christian roots mixed with unbridled capitalism.

“It’s more than the white-picket fence and the dog — it’s more than that,” he continues. “You can have the boat and the swimming pool. Your wildest dreams can come true. And God wants that for you. It’s this weird American way in which Christianity mixes with capitalist ambition.”

Pioneering televangelists Jim Bakker and Tammy Faye rode this “God wants you to have it all” prosperity gospel  in the ’70s and ’80s with their wildly popular TV program The PTL Club.

Showalter remembers watching The PTL Club as a teenager in the ’80s. To him, the show was a “curiosity,” something he found “a bit ridiculous but also entertaining.”

In 1988, Jim Bakker (played by Andrew Garfield) was indicted on eight counts of mail fraud, 15 counts of wire fraud and one count of conspiracy. He was sentenced to 45 years in prison, but ultimately served about five. (ABC News goes into the reasons why here.) Tammy Faye was not charged.

“The scandal was big news for a really long time. Everyone took pleasure in watching them be brought down. Tammy Faye was a big laughingstock. We all made fun of the way she looked and the way she talked and her high voice and her makeup and her garish outfits,” says Showalter. 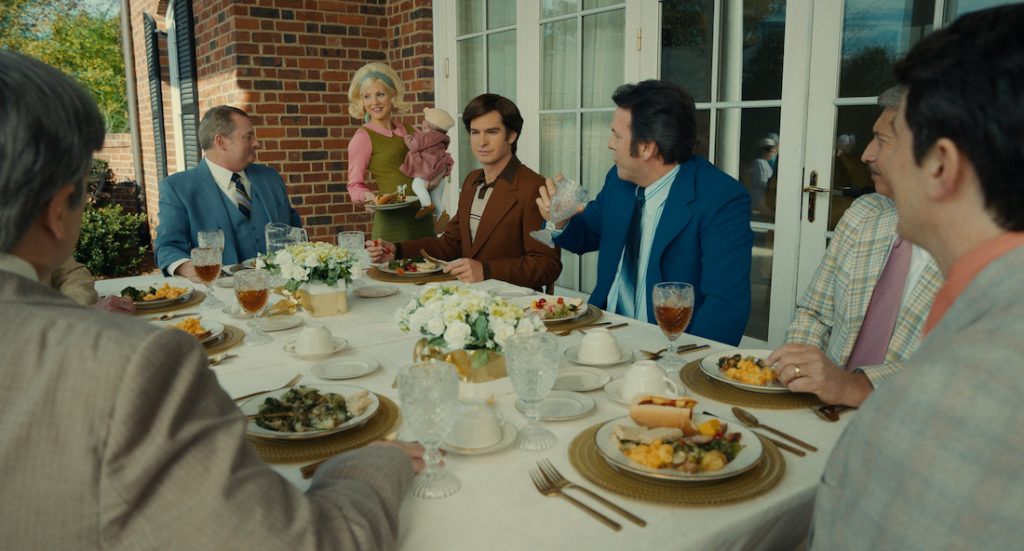 Jessica Chastain and Andrew Garfield star as Tammy Faye and Jim Bakker in The Eyes of Tammy Faye, from director Michael Showalter

When searching for scripts, Showalter says he looks for a main character who “is not obviously heroic or is challenged in some way.”

“I find that a good challenge is to take seemingly unlikable characters and to find the humanity in them and to look at them in a way that looks past the superficial way we might see that person,” he says.

While her then-husband Jim Bakker was committing massive fraud behind closed doors, Faye embraced people on her daily program who had been shunned by more conservative Christians, like Moral Majority founder Jerry Falwell (played by Vincent D’Onofrio). In one sequence in the film, she speaks via live feed with gay pastor Steve Pieters, who had been diagnosed as HIV positive. Faye’s compassion is striking in the context of the era, when many fundamentalist Christian leaders turned their backs on people with HIV/AIDS.

Tammy Faye’s live interview with pastor Steve Pieters (Randy Havens) in The Eyes of Tammy Faye, directed by Michael Showalter, was based on a real moment on her Christian TV program.

Hidden behind fake eyelashes, tattooed eyeliner and colorful eyeshadow, Jessica Chastain lends layers to her Faye portrayal. She even sings, just as the real Tammy Faye did.

“We were using Nashville studio musicians, some of whom had actually recorded songs with Tammy Faye and had done music for the Bakkers on PTL,” Showalter says. “Rather than using hip cool current musicians trying to mimic that, we actually use the actual studio musicians who were of that time period.”

Showalter says he tried to maintains a zen-like disposition through the challenges of the film, which included studio recordings, portraying characters based on real people, and recreating decades of 700 Club and PTL Club sets.

“I often equate my experience of directing as getting in the ocean and letting the waves hit you. If you fight the waves, you get beat up more. You have to let the waves just hit you. There’s so many elements in this movie. My approach was to just to let all of it be what it wanted to be and then just go with it.”

“In post-production, with all of the jumping back and forth between time periods, there was a lot of experimentation into finding the right balance. In the current version, you start in the ’90s, and you end in the ’90s. But in the original draft, you’re constantly returning to the ’90s as a kind of framing device. And now it’s much more of a bookended thing.”

“It was about telling the story of telling Tammy and trying to zero in on that thread,” he continues. “There’s a lot of other balls in the air. There’s Jim, and there’s the other characters, and there’s all sorts of other points of view that are flowing through it. It was about figuring out how to really focus in on Tammy’s point of view.”

Up next for Showalter is a television series with Will Ferrell and Paul Rudd. Rudd starred in Showalter’s breakout, Wet Hot American Summer, in 2001.

Showalter calls Ferrell’s role in the series “quite dramatic.” He says actors best known for comedy and drama tend to approach their work the same way.

“There’s an essence there with someone like Will, where he just is funny even when he’s not meaning to be — that just is,” he says. “But they’re all very serious about it. And it’s the same approach: What performance do you want to give and let me help with that? How can I lean in? How can I encourage that further?

The Eyes of Tammy Faye, directed by Michael Showalter, is now in theaters.

Main image, above: Jessica Chastain is Tammy Faye in The Eyes of Tammy Faye from director Michael Showalter.