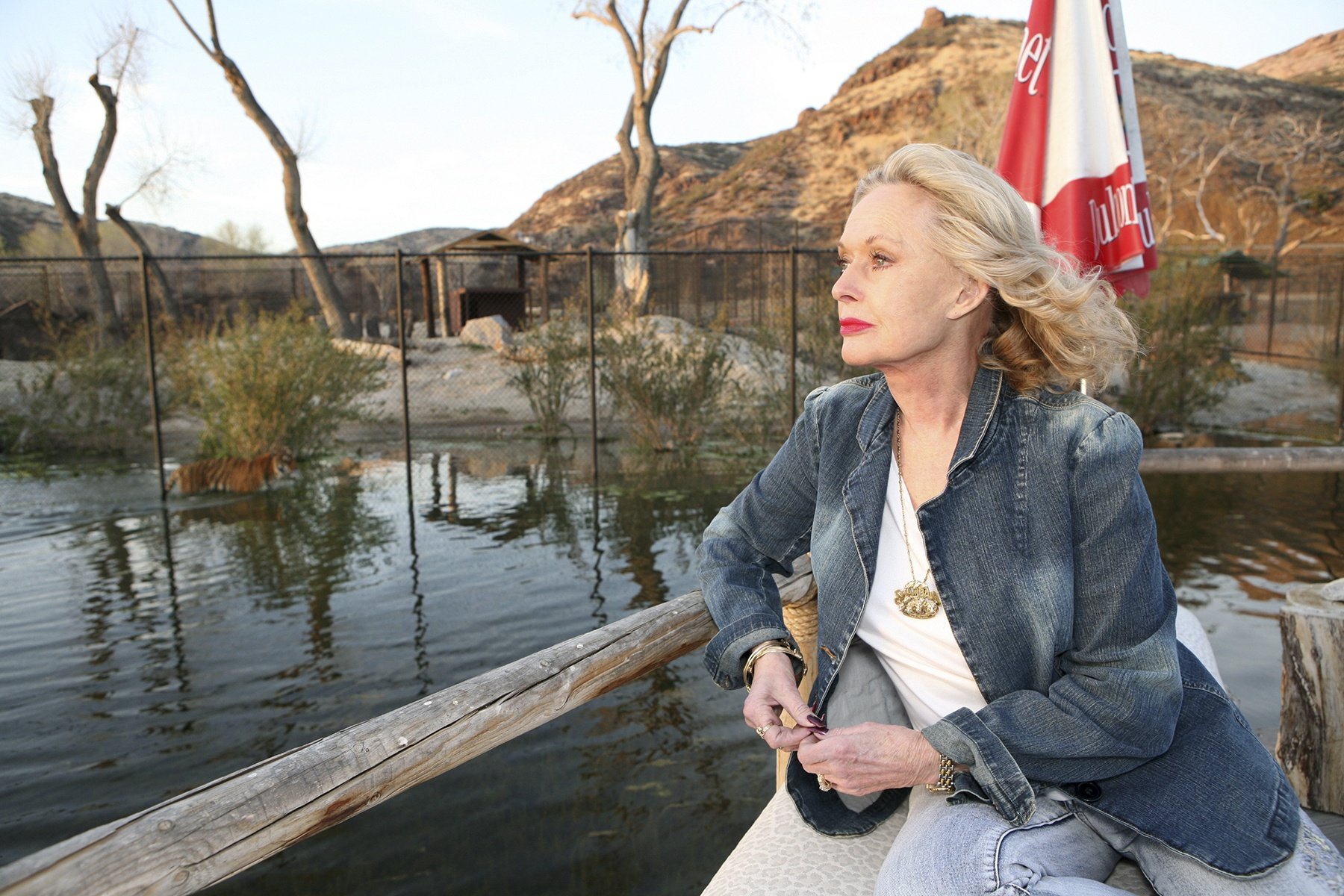 “The interplay between Tippi Hedren and Suzanne Pleshette in The Birds tells me more about women than any number of articles on feminist theory,” swoons cultural critic Camille Paglia in her 1998 BFI essay on Alfred Hitchcock’s 1963 classic.

Paglia adds her voice to those who believe The Master’s last major “discovery”—he summoned then-Eileen Ford model Hedren to a meeting in the fall of 1961 after glimpsing her in a diet drink commercial, convinced he’d found a muse for his post-Psycho project—has proven to be among his most consequential.

From the courtly way the 32-year-old blonde holds her cigarettes throughout The Birds, as if slightly above the encroaching avian chaos, to the easy touch with which she commands an Aston Martin (a year before her future co-star Sean Connery would do likewise in Goldfinger), Tippi Hedren was a fashion icon on arrival. She bent Hitchcock’s thriller toward her aura to such a degree that critics have toyed with the notion that her spellbinding character, Melanie Daniels, is a secret sorceress and an answer to the open question of who or what is fomenting the film’s apocalyptic upheaval.

After finishing a second, more emotionally stormy film with Hitchcock, the German Expressionist-tinged psychodrama Marnie (a production marked by Hedren’s accusations of predatory behavior and abuse against the director) Hedren would complete only two more films for release in the 1960s. She attributes this fact to a vengeful Hitchcock keeping her under contract and perpetually unavailable in order to derail her career. It was in 1969 that her next phase revealed itself, during a close encounter with lions while on location in Zimbabwe shooting the thriller Satan’s Harvest: She fell under the spell of the big cats.

After brainstorming an idea for Roar, a family adventure film set in the African plains and starring a menagerie of wild animals, Hedren and her then-husband, producer Noel Marshall, quickly ran into a wall: No Hollywood trainers would participate in a project requiring large cats to “act” in close proximity to each other, let alone humans. “They told us to get our own animals, and that’s what started the whole thing,” Hedren recently told MovieMaker. A grueling shoot 40 miles north of L.A., marked by floods, financial setbacks, injuries (DP Jan de Bont was scalped by a lioness) and disinterest from Hollywood lasted for over five years, with the film ultimately being released in 1981. Drafthouse Films rereleased Roar last year, with the tag: “No animals were harmed in the making of this movie. 70 members of the cast and crew were.”

Although she no longer holds to the hippie-era animating idea of Roar, that humans and big cats can co-exist without strict boundaries, Hedren has remained in thrall to the animal kingdom, and has increasingly devoted her time to animal rights and conservation. Long ago, she turned Roar‘s shooting locale into the Shambala sanctuary, (Sanskrit for “place of harmony for animals and humans”) a 72-acre facility in the Soledad Canyon in Acton, California, which has housed over 235 exotic cats to date, including snow leopards, cheetahs, servals and cougars. Since 1976, Shambala has also been Tippi Hedren’s home. The den mother, now 86, was in a reflective mood when MovieMaker spoke with her recently about her lifelong synchronicity with the natural world, onscreen and off.

Ryan Stewart, MovieMaker Magazine (MM): Is it true that you actually awaken to lions’ roars every morning in your home at Shambala?

Tippi Hedren (TH): Yes, I do! You never know exactly when they’re going to roar, but it’s a thrilling, thrilling sound. It’s their way of communicating with each other, and I had a very unique experience the other morning: The lions started to roar and I have a tigress living about four feet from my bedroom, and she’s in a great big area, but she started to roar, so I had the opportunity of hearing the lions roaring and the tiger roaring at the same time! They don’t even live on the same continent [in the wild], so hearing those sounds together was just amazing. It’s awesome, that’s the word for it.

MM: What is it that these animals provide you with, after all these years? What do they do for you?

TH: You know, I’ve always been just obsessed with animals, even when I was a little girl, and I always wanted to know more about them, how they live, and how they react to each other. Animals in the wild are infinitely fascinating, and I became very, very interested in them and also how sad it is that people are breeding lions and tigers to be sold as somebody’s pets. It’s an unconscionable thing to do.

MM: How did a general fascination with animals eventually lead to the idea of creating a big cat preserve just north of Los Angeles?

TH: My then-husband and I decided to do a film about the animals, in the wild. It was around the beginning of the ’70s and we chose the great cats to be our movie stars—well, that’s a very romantic notion, you know, these apex predators, top of the food chain, among the most dangerous animals in the world! And so, after the script was written we handed it out to some trainers—Hollywood animal trainers of these big cats—and every one of them read the script and said “I don’t have enough cats to provide you with for the movie, and besides that I wouldn’t let my cat work with another cat it doesn’t know because they’d kill each other!” They told us to get our own animals to do the movie, and that’s what started the whole thing. We started getting our own animals; the first one was a rescue, as was the second, third, fourth, and pretty soon we were rescuing little cubs as well as grown lions and tigers. We had to have a place to keep them.

MM: You also got involved in the protection of the animals on a political level—what sparked that?

TH: It just became so amazing to me that there were so many big cats being born to be sold as pets that after a few years of watching all of this I put a bill together to stop it. In fact, I took it to my own congressman, Buck McKeon at the time, and he said to me “Tippi, this is a huge business, it’s never going to work.” And I said “Well, will you at least look at this video I did, because it will show you the problem and the solution?” And he said “Well, I’m kind of in a hurry…” I said, “Well, it’s only four minutes!” And he looked at it and he absolutely agreed and helped me get the bill passed. And it’s still working. It passed unanimously in the House and Senate and then President Bush signed it on December 3, 2003, I think it was. And it stopped a great deal of the breeding for financial use or for the use of being somebody’s pet.

MM: Hard to imagine such a thing was happening in the first place, lions and tigers as pets.

TH: It’s a really, really good thing [that it stopped] because most people don’t really look into what kind of a pet they buy. It’s a moment, you know, of making a not-very-good decision, and many people don’t even look into the dogs that they’re going to acquire: how big they’re going to be, how much they’re going to eat, what sort of exercise they’ll need, and so on. So, you see a darling little lion cub or a tiger cub, and there’s hardly anything cuter than that, and then it becomes a problem [and Shambala has taken in its share of castoffs from private owners, including two Bengal tigers that formerly belonged to Michael Jackson.] They become expensive and dangerous.

Tippi Hedren and Melanie Griffith at the Shambala Preserve in 1982. Courtesy of Central Press/Hulton Archive/Getty Images

MM: After Roar, did you ever think about continuing on the path of indie film producer?

TH: No, never, my interests don’t lie there. I’m very interested in people, though. I was a volunteer for an organization called Food for the Hungry for years and years and years, under the direction of the late Dr. Larry Ward, and I traveled all around the world helping people in need. That was an amazing time for me and I’ll never forget it, but being involved with movies? That’s somebody else’s job.

MM: So you’ve never had the itch to direct a film yourself?

TH: Nope! I haven’t. I live on the Shambala Preserve and I wake up every morning listening to the roars and I just love living here. I have a very full life and I have other interests—I always have. And I don’t even know that I would want to do another film, because, you know, when you really get down to it I don’t want to get up at five or six in the morning anymore. And it’s not just one morning, it’s every morning, that’s the problem. Once in a while is fine, but it takes up your life when you’re doing a film.

Foreign Contenders: Brillante Mendoza’s Ma’Rosa Tells a Real-Life Story, Driven By the Energy of the Philippines
“I Discovered One of the Most Interesting Women Ever:” An Interview with Jackie Director Pablo Larraín