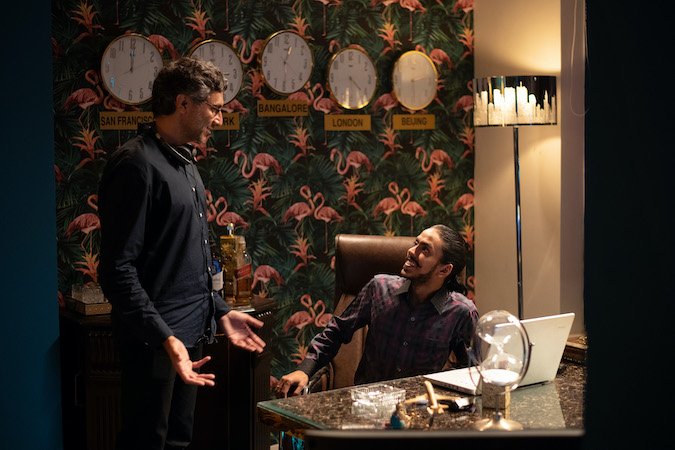 Ramin Bahrani and Aravind Adiga attended Columbia University together in the late ’90s, and a few years after college, Adiga began sharing drafts with Bahrani from a novel he was writing about a smart but poor young man who goes to extremes to rise into India’s wealthy elite. Those drafts eventually became The White Tiger, an international hit and winner of the Man Booker prize in 2008.

Bahrani, meanwhile, had gone on to direct lauded independent movies like Chop Shop and 99 Homes, utilizing non-actors and movie stars alike. So when he saw the opportunity to turn his old friend’s book into a movie, he wasted no time turning an exploratory research trip to India into full blown pre-production. Besides casting, location scouting, and interviewing locals, Bahrani hired a local production company, India Take One Productions. As an Iranian-American and an outsider to Indian culture, he believed it was important to hire a 99 percent Indian crew.

Below, Bahrani speaks with friend and fellow Iranian-American moviemaker Zal Batmanglij (The OA, Sound of my Voice) about the importance of getting the train moving on that initial trip and the casting of the previously unknown Adarsh Gourav in the lead role of Balram. The White Tiger also stars Priyanka Chopra Jonas, one of the film’s producers. Bahrani says she signed on because she found the novel to be a “socially relevant, meaningful work of literature.”

Zal Batmanglij: I had seen the film before it had finished sound and even though I work in this medium, sound just takes it to a whole other level. When am I ever going to learn that?

Ramin Bahrani: I like sound maybe more than any other part of the moviemaking process. And I’ve come to realize in the last couple of movies that there are certain shots — you just have to make them longer, because when the sound comes in, the pace of the movie goes in another direction.

Batmanglij: I felt that with The White Tiger for sure. The sound was drawing me to the performances more. Your lead actor is pretty spectacular.

Bahrani: Adarsh Gourav. It’s such a memorable role in the novel and there were a lot of opportunities in casting diaspora actors that I love and am dying to work with, to Indian stars, Bollywood stars, some I was familiar with, some I became familiar with. I was always hoping though for an unknown from India for the lead, because it seemed inherent to the politics of the book.

It’s such an underdog character, and he’s a poor character coming from the village. He’s a servant. I didn’t know if I wanted to watch an established successful movie star playing a servant. And then Adarsh walked in. He was the first actor that walked in the door for that part that just from the way he walked, I thought, “Oh, I hope he can act.” And he had sandals on, and he kicked his sandals off. 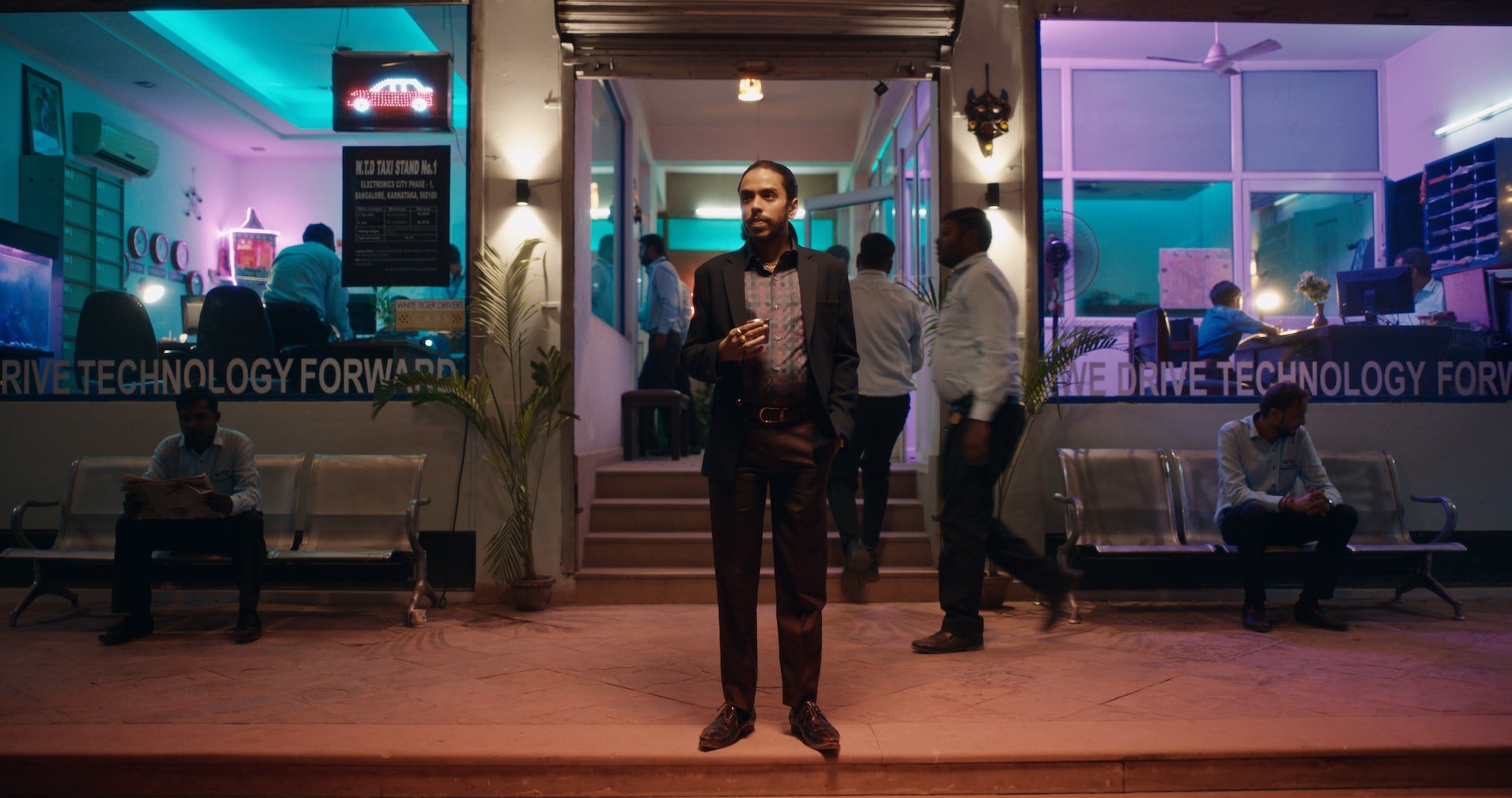 Adarsh Gourav in The White Tiger, directed by Ramin Bahrani.

Zal Batmanglij: Had the film been greenlit?

Ramin Bahrani: Well, as you probably know, the way to get a movie made is just to start the train and get it moving, when no one has said you should do that.

Bahrani: You get the train and go and eventually people catch up to you. At this point, the movie had not been greenlit, but I convinced Netflix to give me money to go to India for a couple of months of researching, casting and location scouting. And I did that by interviewing location scouts and casting directors in India on my own, and coming up with a budget on my own and presenting it to them saying, “I need this much money to do these things. I’ve vetted the people. Here are my choices, can you hire them and let me do my work?” It shows them an easy path of how it’s going to get made correctly. It’s not talking anymore. It’s actually happened. “Oh, he was there. He found locations. He found a crew. He found the actors. I guess we’re kind of making this movie.”

My intention was to get the whole thing going, which is what happened. So this casting process was happening in Mumbai, with an awesome casting director, Tess Joseph, who had done a lot of films, including that big search for the little boy in Lion. So she was familiar with big actors but also non-actors and regional actors. She got the vibe. 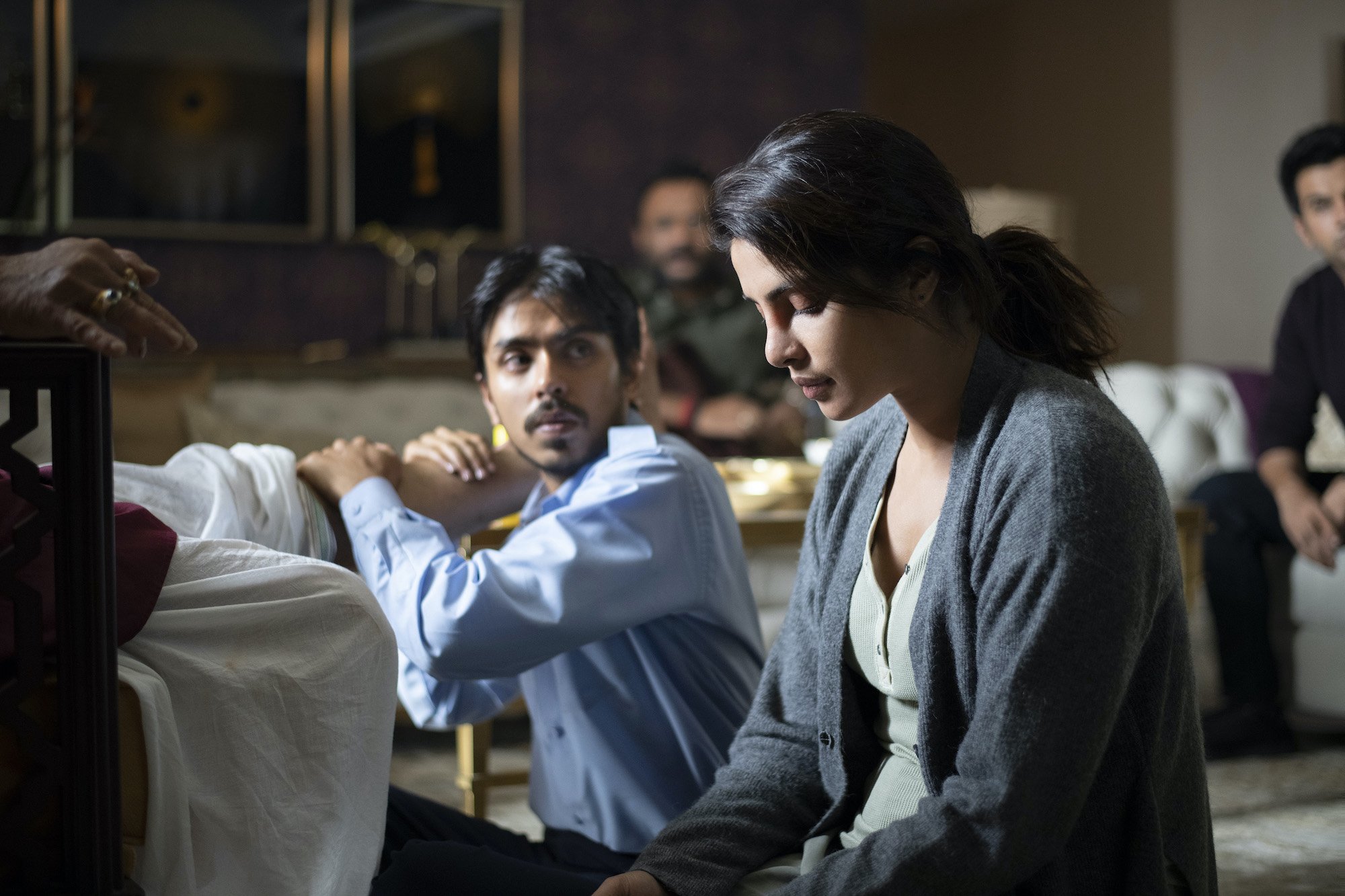 Zal Batmanglij: So you’re just sitting there, you’re seeing a bunch of people, and suddenly this guy walks in in his sandals.

Ramin Bahrani: Adarsh walked in in his sandals and the right clothes. I think he was smart enough to do it on purpose, which was great, because I didn’t know him, so it tricked me in a great way. Later, you don’t feel tricked, you feel like someone did the research. Someone didn’t show up in a Nike T-shirt and a Rolex. He had an amazing smile and a charisma.

The only thing I had any concern about was the voiceover. And he wasn’t that good at it in the initial audition. I came to understand that they don’t have much voiceover in Indian films. That’s what I was told by the casting director, because none of the actors could do it. And then after I cast him, and I came back to New York for a little bit and went back there, he started to nail it. He started to find the character for real, and then he started to nail the voiceover too.

Batmanglij: Had he gone to drama school? Did he have any experience at this point?

Bahrani: Yeah, he had done a few supporting roles. And he had gotten a full scholarship to the best acting school in India. So he wasn’t a non-actor. He was for real. He just hadn’t had that moment yet. What
a blessing for me, not for him, for me, that this was his moment, because, honestly, he inspired me every day to do better, to be better. All the actors did.

Batmanglij: You feel that chemistry, energy and synergy when you’re watching it. Watching the film a second time, all of a sudden I see all the micro things Adarsh is doing in that opening sequence, that as someone who knows the twists and turns of the story — and there are twists and turns — was surprised that he’s been conveying from the beginning.

Bahrani: I remember asking him one time, “How do you think you would walk as a servant? And how would you walk as a successful entrepreneur three years later?” It’s an epic story. Two weeks later, he was like, “Ramin, I have 12 walks I want to audition for you.” And he auditioned 12 walks and each of them had a purpose, a way that they came to be, and we picked them. We picked the walks.

Bahrani: I don’t know what it is for you, Zal, but for me the most exciting thing on set is finding something new with the actors. Of course, I’m interested in where to put the camera — I have very specific ideas about it. But I like the surprises and the discoveries with the actors the most on set.

It’s never about telling them where to go or what to do. Never. It’s always about asking them what they want to do and how we want to do it and pushing them to search. That was the number one word on set: search. Can you search for something else? What other way could it be? What other way could this scene be? What haven’t we found in this scene yet, that we might miraculously find right now, before we turn on the camera, or after we’ve turned on the camera? What about the next take? Can you do something different?

Batmanglij: That starts in the audition, as you were saying. I have lots of friends who are actors, and they rightfully so hate the auditioning process. I have felt the same feeling that you just described, that the person is doing more work than you’re even capable of doing. They’re coming in with the right shirt, the right shoes. When we were casting the role of Steve in The OA, Paddy Gibson had flown from Ireland to New York, and he came in with a journal he had written as a character. And he didn’t show it to us. He had just done it. We were the ones grabbing it, being like, “Wait, is this yours, or is this the character’s?” It’s that kind of gift that keeps on giving. It’s crazy when you encounter that.

Bahrani: When actors are good, they make it much better than we could ever dream about on our own. I mean, much better. As long as you don’t get in their way.

The White Tiger, directed by Ramin Bahrani and starring Adarsh Gourav, is available to stream on Netflix this Friday.

No Man’s Land Director Conor Allyn on Using a Classic Genre to Explore the Border
Derek DelGaudio: In and Of Itself Emotion Is No Illusion