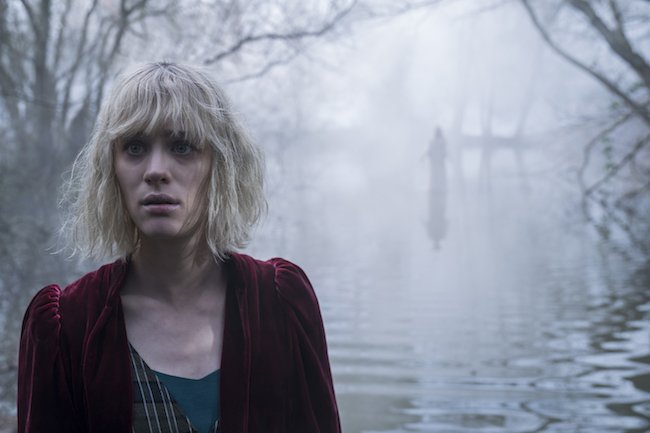 The Turning director Floria Sigismondi shot on location in Ireland for the film, a Turn of the Screw adaptation that stars Mackenzie Davis as a nanny in a dire situation. In this piece, she talks about the challenges she overcame to turn out her singular vision.—MM.

Finding the right location is half the battle in setting up the world of a film. The house in my new film The Turning, which follows a nanny (Mackenzie Davis) who’s sent to an old manor in Maine to watch over two disturbed orphans, is a character itself. I wanted to find a place that felt like my character Kate (Davis) was entering a fairytale when she arrives at the house. The atmosphere of Killruddery House in Ireland is rich with history and over the years many people have lived and died within its walls. From Kate’s perspective, the house is like entering a dream. But then that dream takes a troubling turn. Paki Smith, our production designer and a local, knew instantly that we needed to see this estate. It offered everything we needed, including a children’s wing, a maze, a koi pond, and a lake. It was perfect for us!

The owners also allowed us to change the color of the walls, which was very important to me. Color is a tool I use to communicate feelings in the story, and this allowed us the freedom to customize it exactly as we wanted. The idea was to fill the house with furniture and artifacts from different eras, collected by the deceased parents of the children in the film during their exotic travels. The bones of the house are Victorian, but the objects in the house were more eclectic and took us into the ’90s, which is what sets our adaptation apart from the original story.

I wanted to have the freedom in The Turning to shoot in any direction and be able to pop on a wide-angle lens to amplify Kate’s isolation. That meant not having big lighting setups that would take time to move from shot to shot. David Ungaro, our director of photography, rigged all the lights from the ceiling to enable us to move quickly.

I wanted to design an arc that followed Kate’s deterioration with the camera work as well. As Kate arrives to the grounds, the film has a very composed framing style, where we see Kate is smaller in the frame and the colors are more vibrant. Then, as the film progresses, we feel Kate’s frame of mind unravel and her dread start to build. This is mimicked through handheld camera work with a more nervous camera style. The color change becomes less intense and even Kate’s clothing becomes more textured so that she starts to blend into her environment.

Also Read: Up Close and Personal With the Slamdance Film Festival

My philosophy is that if you can do it practically, that will render the most emotional response.

In one scene Kate has a frightening encounter in a bathroom mirror with the ghost Jessel. I wanted to shoot this practically so that both actors could react and play off of each other. We recreated part of the set in a barn on the property. I used a 50/50 mirror and choreographed the scene with lights dimming up and down at pivotal times. My goal was to use this as one continuous take, but in the end, we cut it up to give it a sense of urgency. I also used this trick in a Justin Timberlake video I did for the song “Mirrors,” which was shot in one take by The Turning cinematographer Matty Libatique.

One of the biggest challenges we had was shooting the horse chase sequence in the maze. It was scheduled to be shot over five days. But the weather in Ireland is very unpredictable in the winter. We ended up shooting during various weather conditions that all needed to match. The arrival of Storm Emma really put a challenge on production. We were shut down for five days and our production returned to a countless number of challenges. For one, we needed to melt all the snow to match what we had already shot. But then there was so much mud on the paths that we couldn’t get traction with the mechanical horses. We needed to dig up the paths and fill them in with sand. Then with everything in order, just to throw an extra wrench in the mix, we had a sunny day that did not match the lighting conditions of what we had already shot. Michael Housner, the film’s colorist, and I had the fun challenge of matching all these different lighting scenarios so it blended seamlessly.

Ireland has wonderfully talented crews, and you should hire local where you can. We hired our production designer Paki Smith, hair stylist Orla Carroll, makeup artist Lynn Johnston, and costume designer Leoni Prendergast. They were all local Ireland hires, and they really brought my visions to life.

When shooting in Ireland, be prepared to add a few flights to places like London and Paris to shop for fabric and clothing. It’s an island and you will most likely need to source from another country, so cover yourself in the budget.

Also, expect to be shooting 10-hour days in Ireland. This lengthened our shooting schedule and added many weeks.

Lastly, take advantage of every corner of your location. Shoot it all—from empty hallways to doorknobs! You never know what might come in handy later in the editing bay.

The Turning, directed by Floria Sigismondi, is now in theaters from Universal Pictures.

Jon Avnet’s Hollywood Advice: Get Them to ‘Maybe’
Whirlybird Doc Soars Over Fires, Riots and Killings to Tell the Origin Story of Breaking News