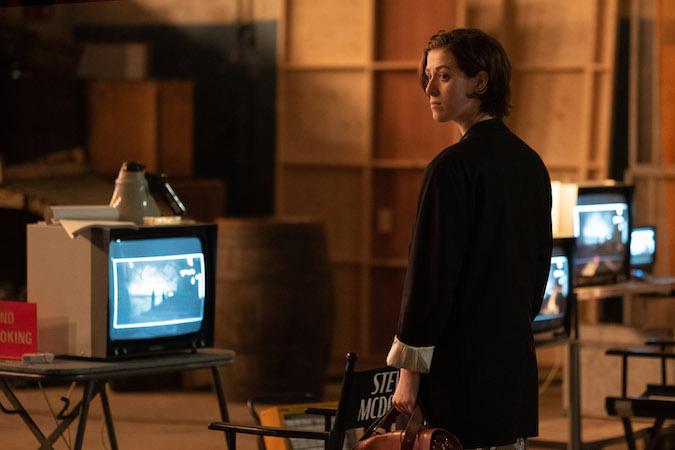 The Souvenir Part II writer-director Joanna Hogg has a unique screenwriting process — one that involves “all the things you’re told not to do with screenplay writing,” she tells MovieMaker.

“I’ll design a setting for a scene, and then the words come out of them because of the situation that they’re in,” Hogg says on working with actors on set. “And then we’ll develop it over a number of takes. So the first take will often be very rough and quite chaotic. Sometimes I like that, and that goes in the cut. Or it’ll get sculpted, so by take 11, everything is more streamlined.”

The Souvenir Part II is Hogg’s fifth feature, a follow-up to 2019’s The Souvenir. And it was on her first feature, 2007’s Unrelated, that she quickly realized the traditional manner of writing dialogue for actors wasn’t working.

“I wrote Unrelated in a conventional way, and then on day two or three of the shoot, I realized I wasn’t having much fun carrying the script around and getting the actors to say exactly what I had written on the page,” Hogg says.

“A lot of my directing has to do with listening and hearing rhythm and how people say a line, so I just didn’t like what I heard,” she says.

Hogg immediately made a change.

“I thought OK, to hell with this, threw the script on the ground, and then I felt I had a much more immediate, direct relationship with the actors. It was suddenly much more exciting and interesting, not knowing exactly what was going to unfold at each turn. But still having a story in mind, obviously, but not being restricted by these words on a page.”

From that moment forward, Hogg’s scripts possessed a quality that could be considered novelistic.

“Sometimes I even write the thoughts that the character is having internally. I want to get a very strong sense of who these people are,” she says.

“So describing their inner life in the way that you would in a novel I find really helpful for me as a guide of where I’m going and what I actually want to get from that particular person in front of the camera.”

Both The Souvenir and Part II star real-life mother-daughter duo Honor Swinton Byrne and Tilda Swinton as a fictional mother-daughter duo. Despite her mother’s acting pedigree, Swinton Byrne was a newcomer to acting, previously only starring in 2009’s I Am Love (also alongside her mother). The family is rounded out by non-professional actor James Spencer Ashworth as the father. While Hogg orients the way she works with actors differently depending on their experience and the particular role, her scenario-based screenwriting method works across a wide spectrum.

“I’ve generally found that actors and non-actors get a good understanding of what I’m trying to do from what’s written and then they’re free to interpret, but not just interpret from nothing.”

To Hogg, this is not simple improvisation, and she spends a lot of time writing out these scenarios in her scripts, which guide the actors once they are on set.

“There’s a map, there’s a plan, which is why I never like calling it improvisation exactly. I always think improvisation is where you’re just vaguely trying to find something and there’s no form or there’s no thought-through plan,” Hogg says.

“I spend a long time writing my scripts, as long — if not longer — than somebody writing conventional screenplays” she adds. “It’s not like I skip the writing process. It’s just the what I end up with is a very different looking document.” 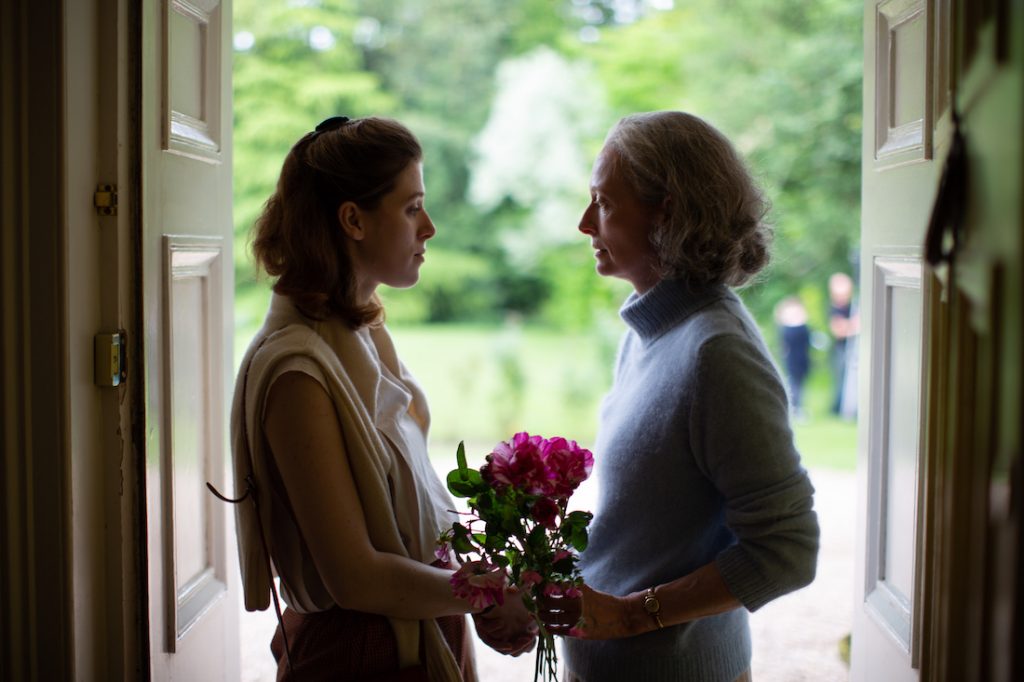 Many actors find this unique working method to be compelling and exciting to attempt, but Hogg says the results can be mixed.

“There have been occasions where I’ve got on set with that actor who couldn’t wait to get on set and work in that way, completely freeze up,” she says. “And I completely understand. It’s a terrifying thing, because the onus is on them in many ways.”

“I’ve learned over the years to really be an encouraging presence on set,” Hogg says on combatting the potential for freezing up.

“I’m not a director who likes intimidating my cast,” she continues. “The opposite. I want them to feel really comfortable, so that they’re free to express themselves, and that there’s nothing that they can do or say that will be foolish. I won’t make fun of them, or they won’t be made fun of on the set. That atmosphere for me is the key thing to get right.” 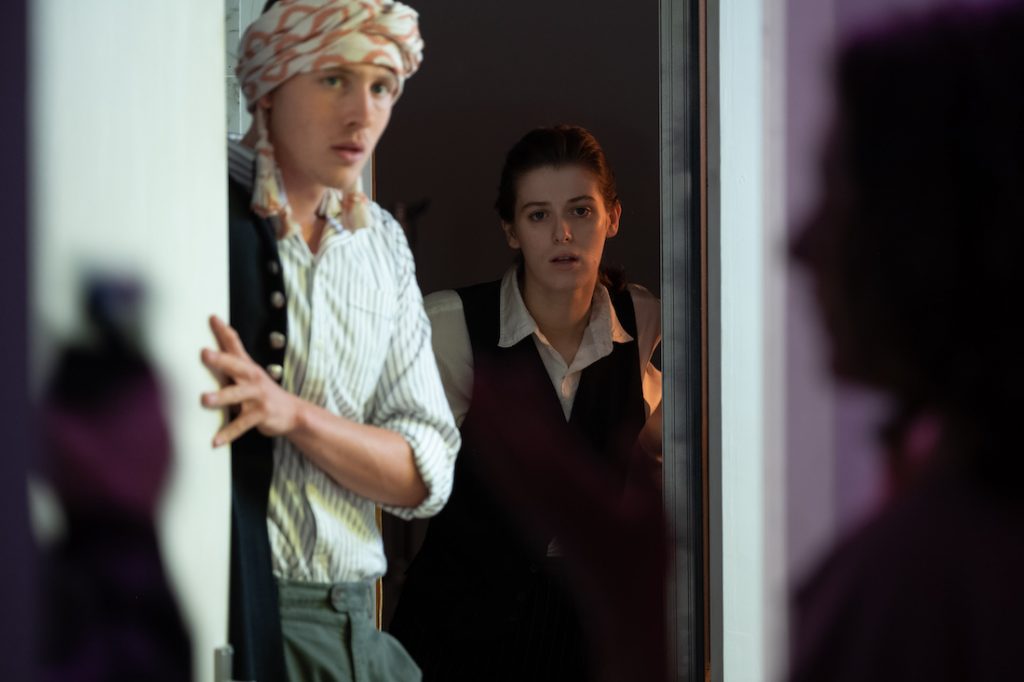 Part one of The Souvenir followed Julie (Swinton Byrne) as a naive upper-middle-class teenager who begins a relationship with an older man, Anthony (Tom Burke). Anthony is a high-functioning drug addict, something he mostly keeps secret from Julie. That film ends with Anthony’s unexpected overdose death, and The Souvenir Part II follows film school student Julie as she navigates using her thesis film as a way of understanding and moving on from that relationship, as well as learning how to be a director.

Julie’s journey mirrors Hogg’s own experience in London in the ’80s, first with the relationship and death of her partner and then at film school.

“It’s a constant dance with what I think I remember, and then what’s happening in front of me, working with actors who obviously don’t know the story or didn’t experience that particular moment in time I’m trying to depict,” Hogg says.

“Sometimes I’ll see something play out in front of me during the filming that doesn’t feel like what I remembered. But then I do this little sort of negotiation with myself,” Hogg continues. “And I ask, Well is this actually more interesting? Is what I’m seeing playing out in front of me more alive than what I could try and get my performers to mimic of what I remember?

She adds: “What you remember is not necessarily what happened anyway.”

C’mon C’mon Writer-Director Mike Mills Tears Up Over Joaquin Phoenix: ‘I Love Him’
Here Are All the Competition Award Winners From SCAD Savannah Film Festival 2021