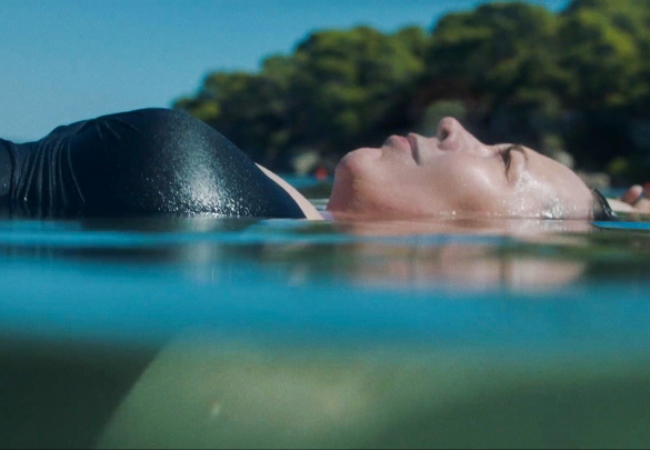 What purpose do sex scenes serve in modern cinema? Maggie Gyllenhaal has one in her directorial debut The Lost Daughter, and she thinks there’s still an interesting way to do it — as long as they don’t just cater to male fantasies.

“I’m not particularly interested in Victoria’s-Secret-demi-cup-bra-arched-back fantasy sex,” Gyllenhaal told MovieMaker ahead of The Lost Daughter‘s Dec. 31 streaming premiere on Netflix. “I don’t find it hot, and I think it’s a little boring.”

Gyllenhaal is, however, interested in relatable sex scenes that mirror real life.

“I think sex scenes are really fascinating. I think sex is one of the most interesting things that human beings do together. And also, I think that they can express really interesting interactions between people,” she said. “I am interested in real human expressions of sex.”

In The Lost Daughter — which is already out in U.S. theaters if you don’t want to wait for it to start streaming on the small screen — there’s a sex scene between Jessie Buckley, who plays young Leda, and Jack Farthing, who plays her husband, Joe.

“If you look at the scene in my film, I haven’t seen a scene like that before,” Gyllenhaal said. “You often see a theme or a guy come too quickly or something, but I haven’t actually ever seen a scene where there’s, for whatever reason, between this couple while they’re making love, he isn’t hard. And she has all sorts of feelings about it, and he has all sorts of feelings about it. And I’m not trying to say any definitive thing. In fact, I’m not trying to say anything that could be articulated in a sentence, which is why it’s a valuable scene in the movie.”

Gyllenhaal also made a point to showcase her actors’ bodies exactly as they are.

“I love my actors’ bodies, all of them. Olivia Colman’s body, in my film, is a huge part of my storytelling, when we’re kind of half under the water with her at the beach. Dakota Johnson’s body is a huge part of storytelling, and Jessie Buckley, and [Gyllenhaal’s real-life husband] Peter Sarsgaard. All of their bodies are exposed in one way or another. I think [it] really is a part of the language of my film.”

The Lost Daughter is now playing in select theaters in the U.S., and will begin streaming on Netflix on Dec. 31.

Main Image: Olivia Colman as Leda in The Lost Daughter, courtesy of Netflix.

How Do You Film Twin Scenes? Swan Song‘s Mahershala Ali and Ben Cleary Break It Down
A Journal For Jordan Screenwriter Virgil Williams Learned This ‘Powerful’ Mantra From Denzel Washington