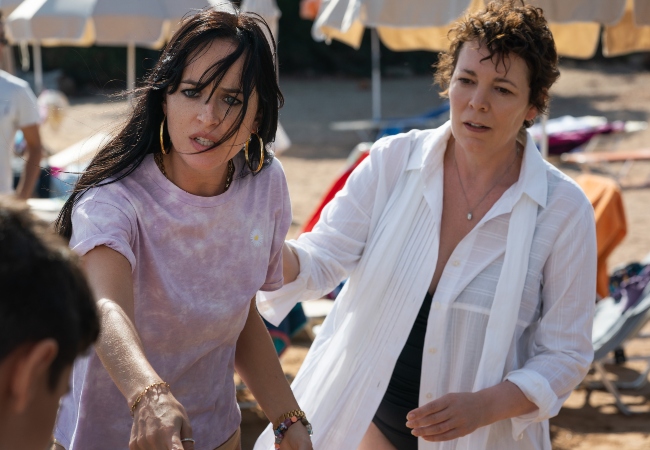 The long-time actress, who has starred in movies including The Dark Knight, Secretary, The Kindergarten Teacher, and Crazy Heart, makes her feature directorial debut with her new Netflix film, which she adapted from Elena Ferrante’s novel of the same name. The Lost Daughter stars Olivia Colman as Leda, a woman whose complicated relationship to her own sense of motherhood causes friction with a family she meets while on vacation in Greece.

But if you were expecting to see a feel-good family movie, think again.

“I spent so much of my life seeing representations of women in film and television that were close to my experience but that left out whole swathes of things that I think and feel. In some ways, I think I wondered if maybe my experience of the world was unusual, was strange, was maybe not normal. I now think that it’s really the opposite of that. I think that what is normal and what is human and what is just a part of being alive is really pretty big,” Gyllenhaal told MovieMaker ahead of The Lost Daughter‘s Dec. 31 release on Netflix.

She hopes that viewers watching her film will find it as jarring as it is relatable.

“I do think it’s both disturbing and comforting to see those things put on-screen. Ideally, you’d think, wow, someone else is expressing this. I can’t possibly be alone in feeling similar things,” she said. “Even though my main character, Leda, does really abhorrent, really transgressive things — or a really abhorrent transgressive thing — which is, I think, further over on the spectrum of possibilities than most people would think about. Well, no, not think about doing, but would do.”

The moral center of the film boils down to this: “Can we be compassionate enough, can we be brave enough, to acknowledge the ways that we relate to this person who did this very painful thing that has really painful consequences?” Gyllenhaal asks. “I hope that people will be pushed outside of a kind of half-asleep, very comfortable state, but that ultimately they’ll feel seen and comforted by it.”

Also Read: Why Kurt Vonnegut Wrote in Simple Words We Can All Understand

The Lost Daughter shares that shocking element in common with another one of Gyllenhaal’s films — 2018’s The Kindergarten Teacher, which stars Gyllenhaal as a kindergarten teacher crosses legal boundaries in an effort to protect her young student’s gift for poetry, which she believes is prodigious.

“I used to say about The Kindergarten Teacher, which is, again, someone who goes really far over [the line] — I mean, ultimately, she kidnaps him — if you heard that story on the local news, a kindergarten teacher kidnapped a child, you’d think Oh my God, who is this woman? And then the movie offers you an opportunity to try to be compassionate enough to understand how someone who’s not crazy could find themselves in that position. So I guess it’s a kind of an opportunity to practice compassion,” Gyllenhaal said.

“But I think more than that, I used to say about The Kindergarten Teacher, that this is the consequence of starving a woman’s mind. That it’s not without consequences, to deprive us… on The Lost Daughter, I was just looking for truthfulness. I think we took everything anything out of the movie that didn’t feel truthful to me. I really don’t think there’s anything left in the movie that I don’t think is honest. Because, of course, we don’t want to think about these painful things. And so if we as filmmakers give the audience any opportunity to disregard us, they’re going to be happy to do that. Never mind, you people are full of shit, I don’t want to think about this,” she laughed. “I really want to try to be as totally truthful and honest as possible.”

This story was originally published on Dec. 17 and has been updated.

The Unexpected Reason Why Serial Killer Richard Cottingham Is the Subject of Crime Scene Season 2
Yes, That Red Balloon Scene in A Journal for Jordan Really Happened