Why Kurt Vonnegut Wrote in Simple Words We Can All Understand 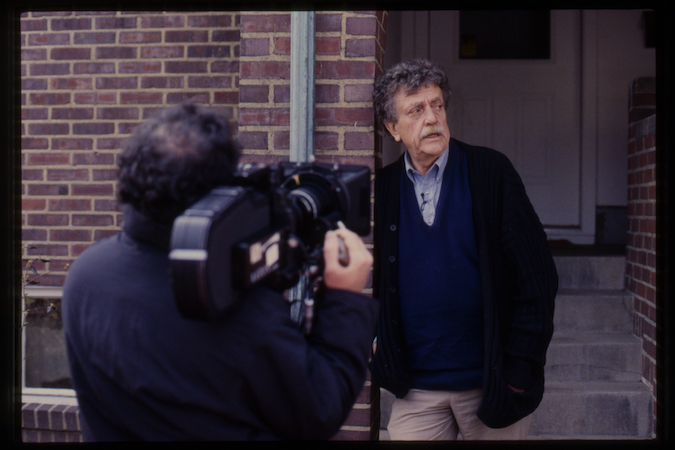 The new documentary Kurt Vonnegut: Unstuck in Time, includes an excerpt from Vonnegut’s 1973 novel Breakfast of Champions, in which he explains the state of the world — with illustrations:

When Dwayne Hoover and Kilgore Trout met each other, their country was by far the richest and most powerful country on the planet. It had most of the food and minerals and machinery, and it disciplined other countries by threatening to shoot big rockets at them or to drop things on them from airplanes. Most other countries didn’t have doodley-squat. Many of them weren’t even inhabitable anymore. They had too many people and not enough space. They had sold everything that was any good, and there wasn’t anything to eat anymore, and still the people went on fucking all the time. Fucking was how babies were made.

Vonnegut’s straightforward way of writing — stating the obvious but unsaid in the plainest language possible — made him a hero to young people furious at official doublespeak that obscured presidential corruption and atrocities in Vietnam. But many highbrow literary critics dismissed it as childish. Robert Weide, who spent four decades making Kurt Vonnegut: Unstuck in Time, talks on the latest MovieMaker podcast about the professional courage required for Vonnegut to write in plain English. You can listen on Apple or Spotify or above.

“He grew up with a lot of classic books in his house,” Weide says on the podcast. “There were any number of great books to choose from, and he was a big reader as a kid, but he never studied literature. He never studied it as a profession. So I think the simplicity with which he wrote just had to do with who he was, he was a guy from the Midwest, from Indiana… He wrote like a Hoosier, and he spoke like one, and he thought like one, and he didn’t have any notions of being self-important.”

“He always wanted his books to be easy to read. And I think one of the reasons that high school students fall in love with Vonnegut is that his books aren’t intimidating. You have that kind of spinach literature — those books that are supposed to be good for you to read, but a trudge to get through. When you open up, as I did, Breakfast of Champions in high school, and you see those those drawings you think, I can handle this. … Serious literary critics did not take him seriously because he was so entertaining, and he was so easy to read.”

Vonnegut’s rules of writing are widely circulated online, and yet almost no one online seems to follow them.

“He would say that writers should treat their readers like a good first date,” Weide says. “Just be interesting, don’t be intimidating, engage them.” 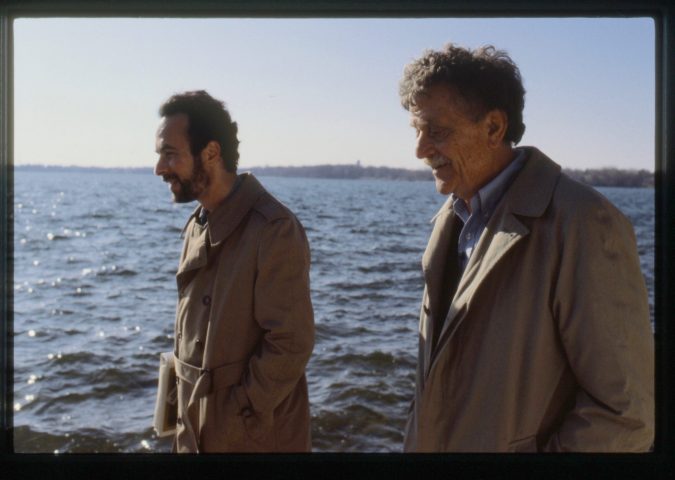 Robert Weide (L) and Kurt Vonnegut in Kurt Vonnegut: Unstuck in Time. Courtesy of C. Minnick and B Plus Prods.

Vonnegut was also open to accepting critiques, says Weide, a longtime friend of the author. Weide first reached out to the writer in 1982 about making a documentary, and kept meeting with him until he died in 2007.

Take that with a grain of salt — as the doc makes clean, Vonnegut was chronically self-effacing and never wanted to appear self-important. But Weide notes that financial pressure was very real for Vonnegut, whose family suffered greatly in the Depression.

His mother killed herself in 1944, in part because of the family’s troubles, just a few months before Vonnegut went to Germany to fight the Nazis. As a prisoner of war, he survived the firebombing of Dresden by hiding in a meat locker, an experience he recounted in 1969’s Slaughterhouse-Five. When he came home, he need to make a life for himself and his family.

“You come out of the war, and it’s the mid to late ’40s. And he had just gotten married. And then before long, there was a kid on the way, you know, he was working as a publicist at General Electric, and making OK money. But if he could sell a short story, he could make more money from one short story that he would make from months of working at GE,” Weide says. “So he just had this natural ability to tell stories, but he studied it, too. He studied short stories in the magazines. He and his wife were trying to figure out what kinds of things sold. He sort of came at it from a very commercial point of view.”

Weide adds: “Unlike a lot of artists who don’t want to hear notes from anybody, who don’t want anybody to tell them, Maybe you should change this, he was eager for anybody, any editor, or anybody at a magazine, to say, You know, if you change the ending… He wanted that kind of feedback, because he just wanted to sell the damn thing.”

Kurt Vonnegut: Unstuck in Time, an IFC Films Release, is now in theaters and available on demand.

Main image: Kurt Vonnegut in Unstuck in Time, courtesy of C. Minnick and B Plus Prods.

This Cute Moment in C’mon C’mon Was Inspired by the Real-Life Daughter of The National’s Aaron Dessner
King Richard: How Director Reinaldo Marcus Green and Editor Pamela Martin Avoided Just Another Tennis Movie