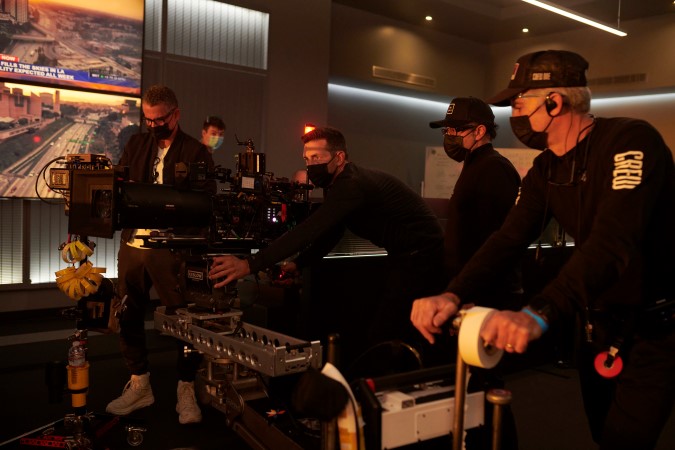 The Guilty director Antoine Fuqua and cinematographer Maz Makhani connected a decade ago on a Lil Wayne music video set and have since collaborated on various shoots including 2018’s The Equalizer 2. They reteam for The Guilty, which stars Jake Gyllenhaal as a 911 operator trying to locate and save a kidnapped woman. The film never leaves Gyllenhaal and the 911 call center, which set up a number of unique challenges. But one unexpected challenge was that a COVID scare, right before production, led to Fuqua directing every scene from a van parked remotely nearby. In this feature,  Makhani explains how that unusual process went, and how they shot the 911 call center with three HD cameras simultaneously.

If there was a movie for this to happen, this was the perfect movie because it was contained on one soundstage. Jake didn’t move around too much, he went from one office to another office, to the hallway, and to the bathroom — there weren’t many locations. We had the luxury of having three cameras that could roll at the same time, which allowed for Jake to be able to do 20-minute takes at a time.

We already had a pretty strong blueprint of how we were going to make the film, so Antoine not being there was a curveball, but it didn’t affect the choices that I made because I could chat with him via text. Every shot, every camera that I had set up, he would OK via text. We also had some phone conversations in the mornings on the way to set.

Jake Gyllenhaal as Joe Bayler in The Guilty, directed by Antoine Fuqua and lensed by Maz Makhani. Courtesy of Netflix. Main image (above): The Guilty director of photography Maz Makhani lines up one of his three ALEXA LF cameras.

I mainly had ambient light coming from the office space. There’s very little supplemental lighting coming from his desk lamp, the monitors in front of him and the large monitors across the wall. This meant there were no angles from any of the three cameras that were extremely flat. And if the third camera was flat because the light wasn’t perfect, I embraced it, because I wanted this film to look real. I didn’t want it to be overly-stylized where every shot was perfect — I wanted an element of realism.

I would have a frontal camera, a profile camera, and then something in the middle of those — either a macro, which is a very close focus lens that allowed us to focus on tight parts of Jake’s face.

Or I would take one of the cameras — either the profile one or the three quarters one and zoom from across the room on a 600mm lens to shoot in between these two cameras. Then it was out of the way of the other two cameras.

All three cameras were usable. There was never a time where I thought that the third camera was a throwaway that doesn’t look great. And these three cameras were pretty much going all the time. Jake could perform well in one take and there were three cameras to cut to. This gave the editor free reign on the performance.

One thing that helped separate him from the space was the sun setting at the beginning of the film. The intensity of the hard sunlight coming in the window separated him from the rest of the room. Without much behind him, the falloff of that light was significant, which allowed him to stand out. Once the sun went away, it was a combination of using shallow depth of field — taking the lens really close to him, and shooting wide open on the lens to allow the background to fall off. 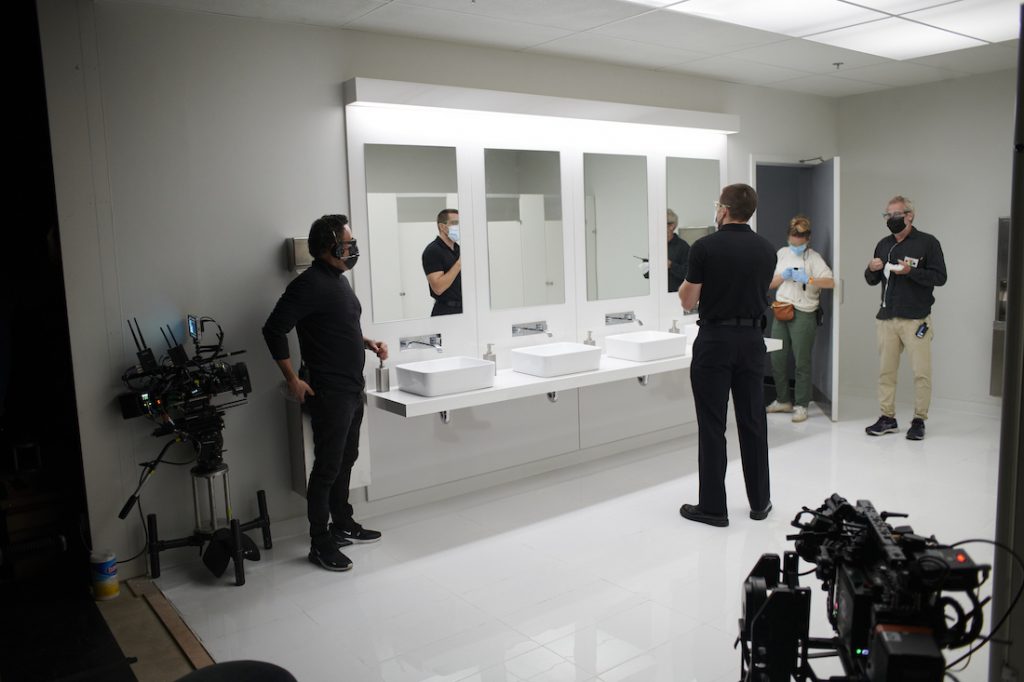 The bathroom is one of the few locations in the 911 call center in The Guilty, starring Jake Gyllenhaal, and directed by Antoine Fuqua. Photo by Glen Wilson/Netflix

The camera placement was very intuitive. We were able to capture multiple takes where I had cameras behind him over his ear on a macro lens where the monitors were in the background. Our production designer, Peter Wenham, built these glass partitions that separated the desks. Shooting through these partitions in profiles added more tension to the claustrophobia that Jake was feeling. Antoine and I love shooting through things and having foreground and depth.

At one point we had a 100mm macro lens that was over Jake’s right shoulder and the focus was on just his headset and his eyeball — everything else just fell off. We got a chance to get into Jake’s character’s headspace because of how close we were able to get with that incredible lens.

Lenses: Hawk 65 anamorphic lenses and a long spherical zoom lens that ended at about 600mm.

Lighting: Mostly LED lights. Everything was controlled through a dimmer and I could change the color, temperature. The ambiance in the room could change however we wanted. The desk lamps were on a dimmer so I was able to control those. I augmented the warm flicking firelight coming from the monitors across the room, with a flicker gag. A flicker gag is an LED light that is able to imitate a flicker effect.

The Guilty, directed by Antoine Fuqua and lensed by Maz Makhani, is now available to stream on Netflix.