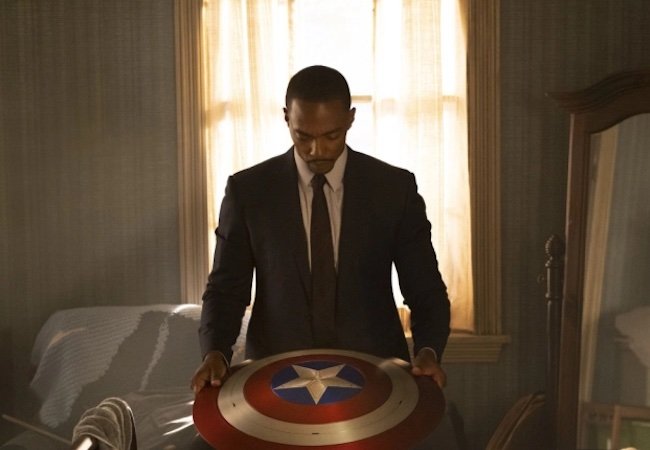 The Falcon and the Winter Solider is widely loved not just for its buddy-cop spin on a superhero story, but its deft and nuanced look at how racial injustice and hypocrisy maintain a painful grip on American life.
It does right many of the things that Internet critics feared Confederate would do wrong. The show, which David Benioff and D.B. Weiss planned as their follow up to Game of Thrones, would have presented an alternate history in which the Civil War ended with the Confederate states successfully seceding. The planned HBO series drew widespread criticism — encapsulated by the hashtag #NoConfederate — that it would amount to “slavery fan fiction,” in the words of author Roxane Gay.
So it may surprise some fans to learn that the Disney+ show and Confederate share a key creative. Malcolm Spellman, who worked previously on Empire, is the show runner on Falcon and the Winter Soldier, and would have been one of the executive producers of Confederate, along with his wife, Nicole Tramble Spellman.
Also Read: The Last Cruise Spotlights ‘Human Shields’ of the Pandemic
In the latest episode of Low Key podcast (above), we talk about whether the assured handling of racial dynamics in The Falcon and the Winter Soldier suggest that Confederate may have turned out to be a more nuanced and intelligent show than critics predicted. It’s also possible that The Falcon and the Winter Soldier has found a more palpable way to drive home the points that Confederate may have tried to make. Or that Confederate was hopelessly flawed from the start.
We’ll never know: HBO finally, officially cancelled the show last year.
A 2017 NPR story about the Spellmans, soon after Confederate was announced, noted that the production may have yielded the “most explosive response ever to a TV show that hasn’t shot a frame, doesn’t have a script, or even a plot written yet.”
In the same article, Malcolm Spellman criticized the critics who judged the show based on a plot synopsis that said Confederate would be set “in an alternate timeline, where the southern states have successfully seceded from the Union, giving rise to a nation in which slavery remains legal and has evolved into a modern institution.”
Malcolm Spellman said at the time that he wished critics, including Black critics, had given him and Nicole Tramble Spellman the benefit of the doubt.
“Regardless of how awkwardly that press release was phrased, we are involved as peers, as full executive producers and as partners,” he told NPR. “If you render us a footnote, the assumption is that we’re just a prop or a shield… Our own people marginalized us like that.”
He also said that Confederate was never intended to be “antebellum imagery. It’s not whips, it’s not plantations, it’s not a celebration or pornography for slavery. And, most importantly, it’s not an entire nation of slaves.”
During our conversation on Low Key, co-host Aaron Lanton summarized one of the reasons many viewers weren’t interested: “It’s hard to want to have a popular culture vision of people enslaved past the time that we left that period in history.”
In her critique of the concept of Confederate for The New York Times, Roxane Gay praised the Spellmans’ body of work, and slavery narratives by Black writers like Kindred author Octavia E. Butler and The Underground Railroad author Colson Whitehead. (The Underground Railroad will soon be an Amazon series from Barry Jenkins, whose 2016 Moonlight won the Oscar for Best Picture.)
But Gay wrote that Benioff and Weiss’ work on Game of Thrones didn’t inspire much faith.
“My exhaustion with the idea of Confederate is multiplied by the realization that this show is the brainchild of two white men who oversee a show that has few people of color to speak of and where sexual violence is often gratuitous and treated as no big deal. I shudder to imagine the enslaved black body in their creative hands,” she wrote.
One key difference between The Falcon and the Winter Soldier and Confederate is that the Disney+ hit has Black creators at the helm. Besides Spellman, who created and leads the show, more than half of the writers are Black, as is the Marvel executive working most closely with the show, Spellman told Deadline last month.
Another difference between Confederate and The Falcon and the Winter Soldier is that the latter doesn’t directly reference slavery. Many critics and viewers understandably feel that such an atrocious practice doesn’t belong in the same universe as movies and TV shows produced for entertainment. Some films about slavery — such as Steve McQueen’s 2013 film 12 Years a Slave — have won Oscars. Others — such as last year’s Antebellum — were critically trounced. Anyone who makes a film or TV show set around slavery should expect to be pressed on whether the story has artistic value, or is using a horrifying backdrop for cheap, traumatic shocks.
But while Falcon and the Winter Soldier doesn’t reference slavery, it does reference both historical atrocities and modern-day injustices.
The first episode addresses the still persistent problem of racism in lending. And a storyline about a Black super soldier named Isaiah Bradley (Carl Lumbly) seems to recall the Tuskegee Study, in which U.S. government doctors deliberately let hundreds of Black men go untreated for syphilis for four decades, beginning in 1932.
Bradley, like the Tuskegee men, was used by the government and then forgotten. But it’s entirely possible to follow the plot of The Falcon and the Winter Soldier with no awareness of this.
The Falcon and the Winter Soldier is now streaming on Disney+.

Ken Burns: Things I've Learned as a Moviemaker
Did 'White Boy' Rick Wershe Jr. Ever Get Released From Prison?