The Best of Steve McQueen (From the MovieMaker Archives) 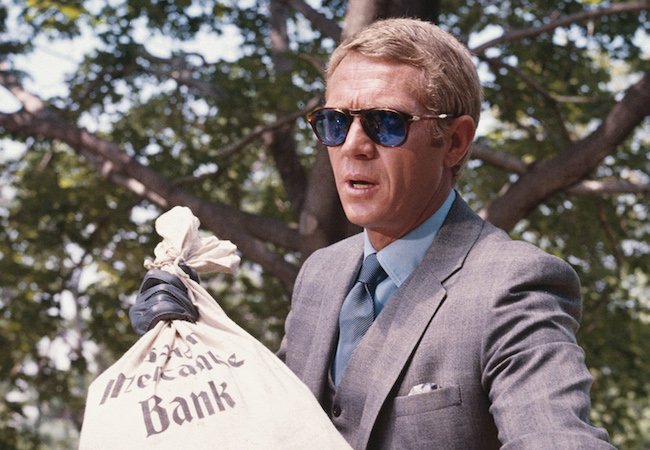 Here is an appreciation of actor Steve McQueen from our archives, originally published on Nov 8, 1999.

Something always ate at Steve McQueen. Jabbed at him, circled him, closed in. Some kind of penitent force hovered over his life and career, waiting to pounce and make him pay for his indifference to discipline, his laconic embrace of fame, or the self-inflicted belief that he was pretending and would be found out. Insecurities gnawed at him, though he seemed to possess a congenital cool that made everything he did look easy. He flew motorcycles over fences, collected the stares of women, dismounted horses at a gallop and gobbled drugs like potato chips, yet still a malevolent force pursued him.

After he became one of the richest and most popular stars of the late ’60s and early ’70s, he opted for roles in which he played the handsome loser, as if he knew that’s what he was meant to be all along.

Abandoned by his father when he was a baby, ignored by his alcoholic mother, raised in street gangs and juvenile hall, McQueen joined New York’s Neighborhood Playhouse in 1952, and began enacting on stage and screen the life-long knife fight with his internal demons. He lost. They got him in 1980, erupting out of his body in the form of mesothelioma, a lung cancer linked to asbestos.

It could be argued that in all of his roles, Steve McQueen played a prisoner. As the Cooler King in The Great Escape, in the title role in Papillon, as Doc McCoy in The Getaway, as the ex-con in Baby, the Rain Must Fall, the walls were obvious, but as Bullitt and Thomas Crown and Junior Bonner—the renegade cop, the millionaire, the drifter—the barriers were rules, responsibility, and family guilt. McQueen always seemed desperate to escape.

He would have been 70 years old in March, 2000. He appeared in 27 movies and one documentary, his movie career lasting a short 24 years. Here are a few of the highlights.

Director John Sturges gave McQueen a small role in his WWII picture Never So Few, and then upgraded him to top supporter in The Magnificent Seven, in which McQueen first showed the special way he could tote a shotgun, as if it were an extension of his crotch. Sturges’s Western may be outdated now. The Mexican peasants are heavily romanticized, the action turgid, and Yul Brynner is truly ridiculous as a bald and black-hatted gunslinger. But you can see the determined gleam of stardom in McQueen. Three years later Sturges cast him as Hilts in The Great Escape, and he created the wily and indelible image of the misfit loner, bouncing his ball against the far wall of the “cooler,” the confinement eating him inch by inch, but his spirit resolute. He stole the film by embodying its soul. He was the ultimate escape artist, going it alone, until all private options failed him. Seventeen years later, when
he couldn’t find a cure for his cancer in the U.S., he sought a wombat remedy in Mexico, determined to do it his way.

He could have had his pick of action films, but Steve McQueen chose several parts in a row in which he explored the emotional interior of his characters.

Baby, The Rain Must Fall was directed by Robert Mulligan, and co-produced by Mulligan, Alan Pakula, and Solar, McQueen’s own company, and you can see why he was drawn to this Horton Foote vignette about a paroled convict who just can’t stay straight. The character, a honky tonk musician named Henry Thomas, was raised by a tyrannical foster mother who tells him on her death bed, “Henry, you’re no good. You never have been. You ain’t worth killing.”

McQueen is unconvincing as a singer, but heartbreaking as an orphan who was never taught how to grow up. At movie’s end he is carted away in cuffs and a police car, his wife and daughter passing by in the other direction. Even at this stage of his career, on the cusp of worldwide fame, McQueen understood the poignant metaphor of his life.

In Love With the Proper Stranger, McQueen has what is perhaps his most likeable role. He’s a freewheeling jazz trumpeter who “goes where the wind blows,” but gets Natalie Wood pregnant in a one-night stand and then struggles with the responsibility of finding her a “doctor” to perform the abortion. As he falls for Wood, he endears us to him with the remark, “I feel like I’m fourteen.”

Teaming him again with Mulligan and Pakula, the movie has a knowing feel for New York City locations and the heady rush of young romance. McQueen and Wood make a lovely team. He’s funny when his feelings are hurt, and appealing without a hint of manipulation. Wood is casual about her beauty and guileless in her portrayal of a Manhattan working girl. They would both be dead in less than 20 years.

Steve McQueen swears once in Bullitt. He says “bullshit” to Robert Vaughan’s duplicitous politician and it’s as though he kicked him in the teeth. These were the days when a single, well-timed expletive could delineate a character’s point of view better than a string of foul-mouthed invectives. These were the days when car chases were real, not computer-generated mockups.

McQueen is the intense detective by day and the groovy bohemian by night, standing in a pool of blood at a murder scene and later swinging with Jacqueline Bissett at a beatnik bar in San Francisco’s North Beach. McQueen made the transition believable and effortless. This is the movie that established his supercool patina, but underneath is something malleable, childlike. “He looks as eager as a fourth grader,” is how my wife described it. And that’s it: McQueen, the reform school grad, found the playfulness and innocence he missed as a kid in his acting.

In The Thomas Crown Affair, he’s a rich playboy who flies gliders, plays polo, races a dune buggy, and masterminds a stunning bank heist, all for the fun of it. My favorite scene is of Crown prancing around his living room after the robbery, yucking it up with a drink and a cigar, like a kid let loose in a Pokemon store. McQueen was never as remote as he wanted to be. His vulnerability always gave him away.

Sam Peckinpah exploited McQueen’s abandoned innocence in the two pictures they made together. Children often frame the beginnings of Peckinpah’s pictures; they are metaphors for loss, the childhoods his loners forsook for violence. In The Getaway, McQueen’s Doc McCoy, just released from prison, watches kids play in a river on a hot summer day, their laughter echoing like some tune he remembers from a car radio decades ago. At the end of the movie, Slim Pickens calls McQueen and Ali McGraw “kids,” and you revisit their whole flight as a game. In one scene, McGraw peels out of a drive-in while McQueen blasts away with a shotgun. They both cackle with glee, like they’re on a fast ride at the fair. As Junior Bonner, McQueen willingly swallows his movie star pride as a broke, adrift rodeo cowboy who’s a disappointment to his father (Robert Preston), no great success himself. In one eloquent
scene, McQueen confesses his poverty to Dad, who knocks Junior’s cowboy hat off in disgust, then retrieves it, dusts it off, and hands it back to his son, his point made. McQueen was 41 when he made the film, lanky and lovable and stubborn, earnest to a fault, and a tad bemused by the knowledge that his time is coming to an end. Reports are that McQueen’s cancer was already starting on the set of The Getaway.

McQueen now saw himself in the role of a doomed man, but one not without a few final gasps of will. He took on the role of the irrepressible butterfly in Franklin J. Schaffner’s brutal account of a French convict who refused to be contained.

As Papillon—McQueen’s only epic role—he managed the delicate task of conveying a timeless spirit within an aging, mortal shell. Papillon is a solid adventure with a moving story at its core, and McQueen made the film work by incrementally deconstructing his star persona. He wore shackles, took a beating, ate insects, and even hugged Dustin Hoffman. He allowed his hair to go gray and his body to stoop. By the end of the movie he was walking like Kim Hunter in Schaffner’s Planet of the Apes. A uniformed ape. But still he escaped, floating to freedom on a raft of coconut shells.

James Coburn, in a recent interview in Premiere, called Tom Horn McQueen’s finest film, but the movie that we saw was not the one McQueen wanted to make. He planned to direct, but since the DGA wouldn’t recognize him, he was forced to hire a union man, William Wiard (a veteran of several Rockford Files episodes). Then First Artists, to whom McQueen owed a picture, took it away and butchered it.

The script was by Tom McGuane and Bud Schrake, based on the true story of Tom Horn, a man who believed that loyalty and violence were inextricably corded together, one of the last of the frontiersmen who made the West safe for ranchers, bankers, and bullies. It was the role McQueen was born to play—the iconic loner running from his past, the man that other men want to trap, kill and bury. There is great potential in the story for elegy and myth-making.

The sadness and armor surrounding Horn was fit for John Ford in the way that director idealized the man of the West, or for Anthony Mann, in the way his cowboys tamped down their psychic wounds until they exploded into violence. McQueen’s Horn was defeated by greedy yes-men; the actor’s passion for this last cowboy stood no chance against the politics of Hollywood.

The movie’s romantic center is truncated; its beautiful edges hacked up; its pace destroyed by a tedious series of killings and random flashbacks. McQueen was beginning to die during the filming. With each killing his walk becomes stiffer, as if a new joint just seized up, as if another valve in his heart has squinted shut.

Death by execution was a foregone conclusion for Horn, who was ready to die when they hung him. Standing on the gallows, looking into the faces of the men who condemned him, Horn says to the sheriff (Slim Pickens), “Keep your nerve, Sam. ’Cause I’m gonna keep mine.” Once again, Steve McQueen escapes.