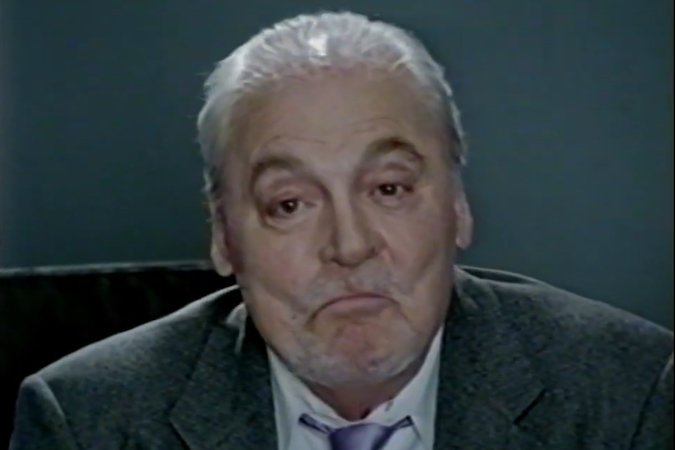 Quinn Armstrong is the writer-director of Survival Skills, a film which takes place entirely within the analog video world of a VHS police training video. In this feature, he explains how he created the organic effects, destroying 40 VCRs in the process.

When I began pitching my feature Survival Skills to production companies around Los Angeles, I often got the same question: “When does the VHS go away?” The honest answer, “It doesn’t,” would often bring the meeting to an end quickly. Ultimately, our commitment to the VHS aesthetic brought us surprising results and a working method that (so far as I know) has never been done before.

Survival Skills is the story of a rookie cop who gets in over his head when he goes outside the law to resolve a domestic violence case. The kicker is, the whole thing is presented as an ’80s-era police training video, complete with a Narrator played by the legendary Stacy Keach. It began its life as a proof-of-concept short that… didn’t really prove the concept.

The reason it didn’t work is because we used a digital filter to approximate the VHS look. Consequently, this was not a mistake we made on the feature.

The plot of Survival Skills quickly expands beyond the realm of “police training video parody” and so we needed audiences to accept the authenticity of what we were doing immediately. We briefly considered shooting on tape directly, but frankly, we didn’t have the budget to sufficiently light our night scenes at that dynamic range. Eventually, the decision was made to shoot on an ARRI ALEXA, cut the movie on Avid, and then transfer the whole movie over to VHS.

Once we had the movie on VHS (the transfer was done by Hollywood Audio Video Transfer House), we needed to create certain tape wrinkles and static that were written into the script itself. We had tried to do this digitally in the short, and the results had been acceptable, but not particularly interesting. Instead, we wanted something a little more DIY.

Watch our video demonstration on how we achieved the organic effects for Survival Skills using a VCR (tutorial begins at 2:17) and check out the written steps below.

Step 1: Go to Goodwill and buy a VCR. Note that if you want projectable quality picture, you’ll have to get SVHS, which is quite a bit more expensive.

Step 2: Remove the top of the VCR, exposing the inner materials. See that big silver disc in the middle? That’s the drumhead, and that’s where we’re going to focus most of our efforts.

Step 3: Go to a hardware store and buy a decent sized ceramic magnet, a sharp knife, and a long-necked lighter. The bigger the magnet, the sharper the knife, the longer the lighter, the better.

Step 4: Cue up the section of the VHS you want to manipulate.

To create tape wrinkles, use the knife to scratch the tape before it reaches the drumhead. More pressure means larger wrinkles, but be careful not to press too hard, or you’ll black out the tape. 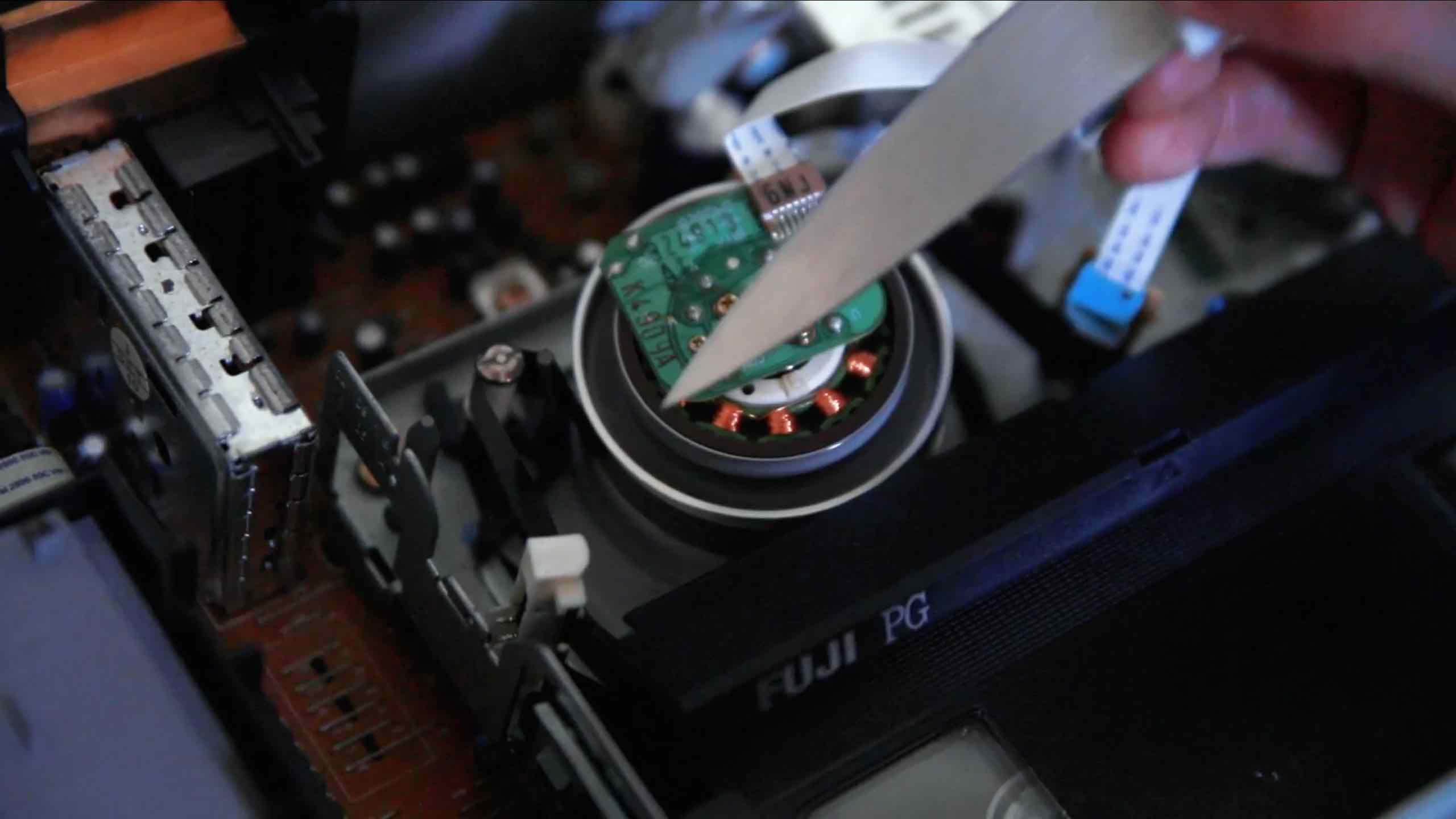 Using a small knife to scratch the VHS tape on the drumhead of the VCR, a technique Quinn Armstrong used for Survival Skills

To create static, hover the magnet above the drumhead. Different positions will cause static in different parts of the screen. It’s best to experiment with some VHS tapes you don’t care much about to get a feel for the subtleties of distance, angle, etc. (It’s a little like playing a theremin.) 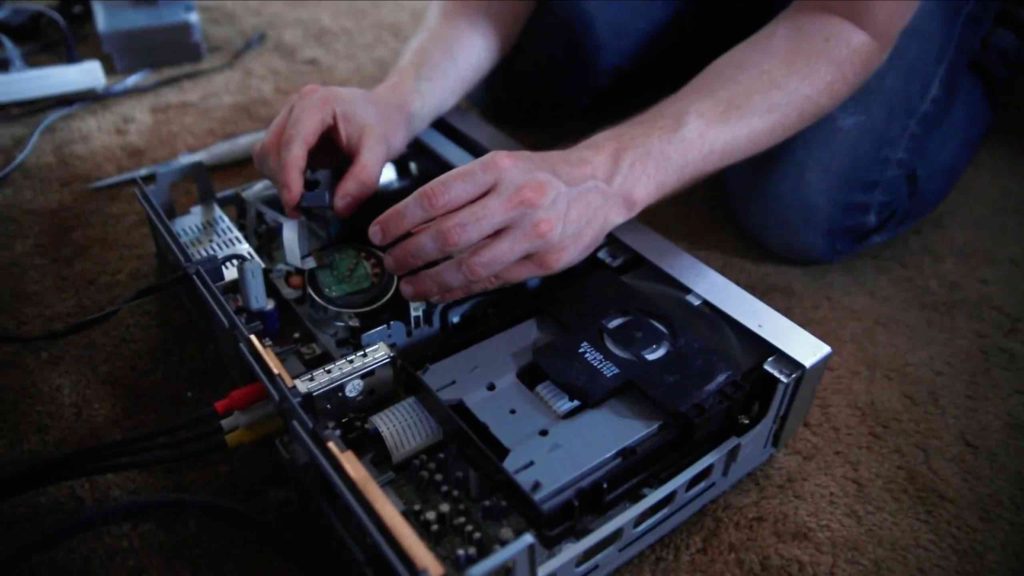 Quinn Armstrong demonstrates how to use magnets to create static analog video effects. Use larger magnet bricks for chunkier static.

To create warping, bring the lighter’s flame close to the tape. Be very careful with this step: A tenth of an inch can be the difference between warp and a burning VCR. Also, have a fire extinguisher standing by. This is, in my experience, the least rewarding and most treacherous of the manipulations, and I rarely even attempted it. 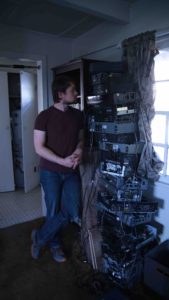 You will need many VCR and many VHS tapes if you want to pull of anything longer than a few minutes. The magnets will quickly knock the drumheads off rotation and, after about 20 minutes of work, the VCR will be useless. I had a stack of about 40 broken VCRs in my living room at one point.

Once I had finished testing and doing dry runs, I bought seven Super VHS tapes and an SVHS player. Two of the tapes had the entire movie on them, four had individual reels (about 20 minute chunks) repeating, and the last tape had a particularly complex experimental sequence repeating around 20 times. I went through all the tapes (except for one of the long plays), trying and often failing to get the effects that I wanted.

After I had finished, we had Point of Blue Studios re-digitize the image. We then made our selects and stitched the movie back together out of our favorite pieces.

While this process was relatively inexpensive, it was arduous and added months onto our post production schedule. Ultimately, I’m thrilled with results, but I wouldn’t attempt something like this again unless it was absolutely necessary. If I were doing a small VHS commercial or something like that, I’d just use the filters. Red Giant makes a good one.

Survival Skills, however, lives and dies by its verisimilitude. In order to take the audiences on the winding path we had planned, it was absolutely essential that we put in the work. As a result, we got a lived-in, organic-feeling film, with zero digital effects (minus one or two screen replacements) and moments of chaotic static that surprised us and elevated the whole experience.