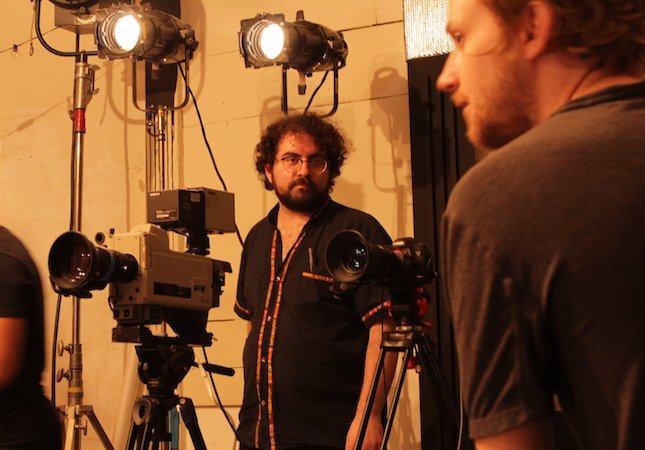 Old camera technology is something I like to collect and not let die. From vintage lenses to analog camera bodies themselves, I’m always looking for a chance to justify using equipment that isn’t the first that comes to mind for making a film. As a moviemaker, I don’t just settle on what’s new and shiny at the rental house, unless I can justify those are the tools a film needs.

So, when director and frequent collaborator Jordan Michael Blake came to me with his idea for Two Words, a short film centered around a 1980s-style public access game show, we knew immediately that this was the perfect opportunity to explore the analog video styles that would capture the unique visuals we were looking for. After asking everyone we knew who might have experience with analog video and spending lots of time on eBay and at Goodwill stores, we settled on two different ’80s broadcast cameras: one CCD camera and one tube camera.

Because these cameras are out of use, they cost us about $30 total (lenses included). The real cost was the countless hours we had to spend rigging a solution that would allow us to capture these outdated video signals to a modern-day external recorder. We knew if we did, we could capture that trademark video glow—the softness and chromatic aberration you can’t get through any other modern process. To create our own overlay effects that we used throughout Two Words, we took advantage of one of the tube camera’s key assets—its ability to create light streaks when pointed at a hard light source.

Most analog video cameras from the ’70s and ’80s use either tubes or CCD sensors. Within these formats, you’ll be presented with many different forms of media capture, from Betacam, to VHS, to MiniDV, to Hi8, to U-matic. None of these formats is necessarily superior to another; they all come with their own quirks, distinctive aesthetics, and hoops to jump through to get your footage onto a hard drive and into your editing software of choice on a budget.

At this point, you may be asking yourself what a tube camera, or a CCD camera, even is. Unless you shot TV in the ’80s or you’re an avid enthusiast of digital camera history, you probably don’t have the slightest clue about tubes and might only have a mere nostalgic recollection of CCDs.

Analog digital cameras have had many iterations since their heyday, and as a result, most folks lump these various formats together into the category of that “old TV” or “home video” look. When we’re talking about tube cameras, the “tubes” in question are the video tubes based on Cathode-Ray Tubes—or CRTs—which is the same technology powering those glowy CRT TV sets we all had in the ’90s. The difference is that instead of displaying images, these tubes help capture them.

To shoot Two Words, we used three different analog cameras. For the scenes depicting the game show, we shot on a Sony DXC-M3A, which uses three 2⁄3″ saticon tubes. For our sequences that take viewers behind the scenes of the game show, we shot with a Sony DXC-3000, which uses a 2⁄3″ CCD sensor. And lastly, for our scenes that show would-be contestants’ submission videos, we used a JVC VHS video camera, which was considerably easier to digitize than the professional broadcast cameras (more on that in a bit).

When choosing which format or camera is best suited for your project, browse YouTube or Vimeo to get a sense of what each has to offer. Unfortunately, you won’t find a “camera shootout” that tests all these cameras scientifically, side-by-side, so search each camera specifically, then scroll through dozens of videos until you come across one that’s been captured and uploaded through modern means. This approach is by no means a 1:1 of what to expect, but it will give you a sense of the nuances of each camera you’re considering before you acquire them. 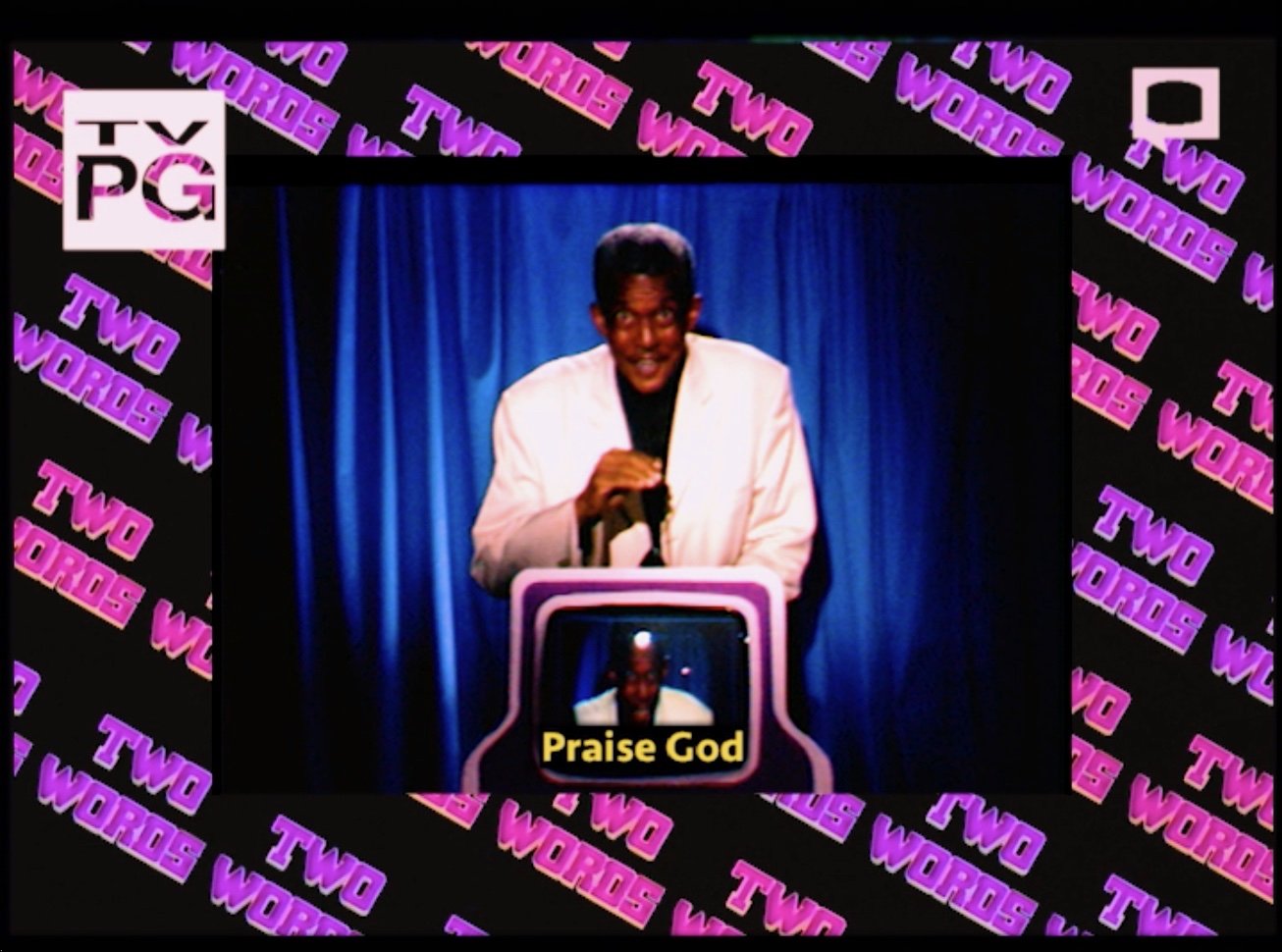 To shoot “glowy” scenes from Two Words like this one, Fidel Ruiz-Healy and his team made sure they were well-versed in cameras that can capture an “old TV” aesthetic.

Hunting these cameras down

It’s safe to say you’re not going to find any of these outdated broadcast cameras at a rental house, and because they aren’t collected and cared for like film cameras, tracking down one that’s in working condition is a project unto itself. If you’re only looking for a miniDV or VHS camera—which aren’t as old as some of the other formats—these can easily be found online in decent shape. Finding a working tube camera or other large broadcast camera, however, is more difficult.

The first and the safest route: Contact one of the few dedicated broadcast camera museums that might rent them to your production. Broadcaststore.com or golden-agetv.co.uk have a huge selection and can provide everything you need to get rolling. Still, these options can be pricey, so we took a different approach for Two Words, which was made in a decidedly DIY style.

The second, more budget-friendly route (and the one I took) is to dig through every used marketplace—online and in person. Some of these marketplaces might include Craigslist, eBay, OfferUp, Facebook Marketplace, Goodwill, etc. ShopGoodwill was my personal saving grace: Through them, I was able to purchase our cameras for less than $30 (not counting the adapter cables and additional accessories—power cables, batteries, viewfinders—we needed to purchase). As with all used online marketplaces, you’ll probably end up buying an incomplete rig, or a camera that needs some repair. Be on the lookout when you buy, expect to face technical problems, and prepare to assemble what you need in piecemeal.

Also read: Best Places to Live and Work as a Moviemaker, 2020

You’ll need to use many different search queries to pull up everything available, since many people are selling these cameras secondhand and don’t know what they are. My go-to keywords when the specific camera model didn’t produce results were: “video camera,” “tube camera,” “broadcast camera,” “vintage video camera,” and “movie camera.” The hundreds of results will be a bit daunting at first, but if you have the patience and know what specific features and outputs you’re looking for, you might find a diamond in the rough.

Finally, the third option—that I’d recommend only if you’re looking for a short rental—is to reach out to your city or town’s local video production companies and/or long-established news stations. Some of the older production houses might have a camera that’ll match your criteria collecting dust in a storage room somewhere.

You may have to start with an awkward and strange phone call, but you might find someone willing to lend you a camera that they haven’t used in years. (I lucked out with this approach on Two Words and had some cameras lent to me while I was still learning about tube cameras and testing out my rig.) 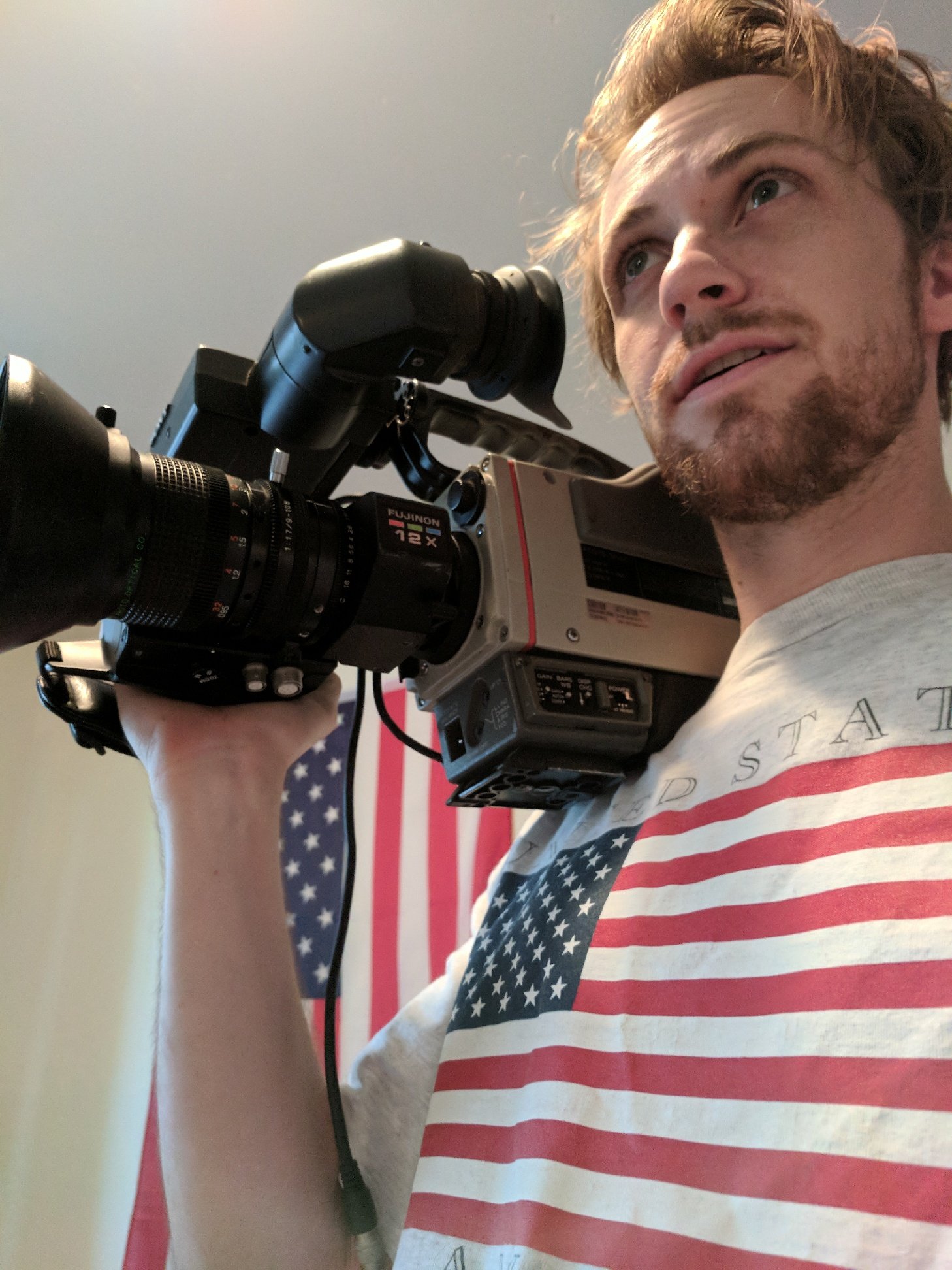 Capturing the image onto a computer is often its own journey. Formats that record onto a physical tape are easy to digitize, since they typically have digital “Capture Stations” available to either rent or buy.

Broadcast cameras are a whole different story since they don’t actually record anything. In the old days, they’d send their video signals up to big control rooms which would capture the video onto spinning reels of magnetic tape. On Two Words we knew we’d have to MacGyver some combination of converters, cables, and recorders to create our own digital control room and get the footage onto a drive.

Thankfully, a few years earlier, I screened a film alongside Nathan Silver’s Stinking Heaven, which was also shot on old broadcast cameras. Nathan’s DP Adam Ginsberg explained that they took the video signal from the camera’s VTR output, converted it via RGB BNC cable so it could be plugged into an AJA Digital Analog HD Converter, and finally captured onto an external monitor/recorder. (That’s a mouthful, I know, so check out the glossary on page 2 for a crash course.) Producers Greg Barnes, Tyler Walker, and the rest of our Two Words crew stepped up to put the pieces together. We found a camera-specific analog control box at the same Goodwill as the camera, which had the RGB BNC outputs we needed (pictured below).

One final problem: Stinking Heaven used an HD converter box, but our budget forced us to buy an SD converter box. Eventually, we landed on the Sound Devices Pix 240, which recorded our image perfectly.

Because of all the unknowns, I can’t stress enough to test, test, test, and have a backup plan if the higher-quality and more practical, yet more complicated route doesn’t work.

Shooting and exposing for analog video

After you’ve figured out your setup, you should fit in some time for fundamental exposure tests. Unlike film and modern digital cameras, many of these old cameras don’t have a set ISO. Instead, they have the option to add and remove gain in intervals of 3db—making the image brighter digitally, and with it bringing a lot of noise. Some MiniDV cameras perform well in low-light scenarios, while tube cameras require that you blast huge lights onto the subject to get exposure.

For the scenes in Two Words that were shot on our tube camera, I had around 5K watts of tungsten light pouring onto the subject and still had to boost the gain to get the exposure I wanted. Daylight will be your best friend. But if you find yourself in a more controlled situation, make sure you have access to power and don’t be afraid of hard light. The other quirk about tube cameras: You’ll have to manually adjust your white balance by popping open the camera or using the control box. Once the camera is heated up, you’ll need to adjust each tube through a dial that will balance the color. 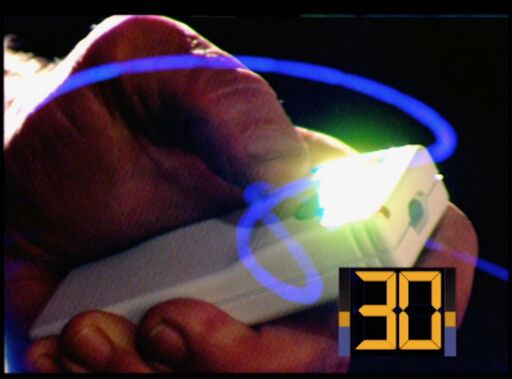 This scene shot by Fidel Ruiz-Healy on tube cameras shows off the camera’s trademark light streaks.

If you run into problems, reach out to moviemakers who’ve done this before. Ask them what their approach was, see if it’ll work for you. Find a camera test or short on YouTube or Vimeo that uses a setup you’re trying to recreate, then contact the person who did it. Your attitude must be DIY: Most reading material online will help you identify certain missing pieces, but it’ll also probably be a few decades old and will only go so far in offering a modern-day approach.

Shooting on analog video isn’t easy. If you’re doing it, you’re doing it because these formats have a particular quality that can’t be recreated in post. Just know it won’t be quick and painless… but it will be the real thing. And delivering your audience the real thing is worth the trouble.

Continue to Page 2 for a comprehensive glossary of these terms.

The Lodge Co-Directors Veronika Franz and Severin Fiala on What’s On The Page v. What Ends Up On The Screen
Bong Joon-Ho’s Next Film After Parasite? Actually, There Are Two