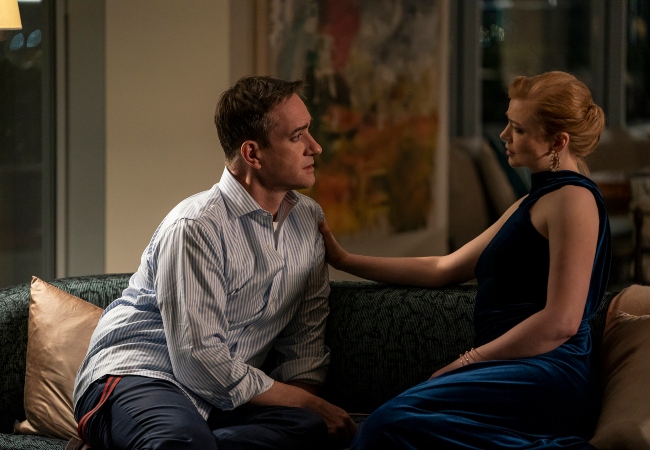 Sarah Snook is opening up about what she thinks about her character Shiv Roy’s trajectory on the beloved HBO corporate drama Succession — and how her “tricky relationship” with her on-screen husband, Tom Wambsgans (Matthew McFadyen) is playing out in Season 3.

“I mean, it’s such a tricky relationship, huh?” Snook told The Hollywood Reporter. “It’s also one of the ones that is more enjoyable to see in the grey rather than in the black and white [of] yes, Shiv and Tom are united, they’re going to do this. I think it’s more fun as an actor to play, for sure, not really knowing where they stand with each other.”

Shiv and Tom have had their ups and downs leading up to this season — fans will remember their gorgeous wedding in Season 1, and their not-so gorgeous wedding night when Shiv revealed that she’s not sure how she feels about being monogamous. That was also around the time when Tom realized that she was having an affair with her political consultant colleague, Nate (Ashley Zukerman) who — fun fact! — attended Snook’s real-life wedding last month.

Snook said that McFadyen sometimes cringes at the way their characters treat each other on screen.

“With Matthew, when we’re saying these things, he’s sort of going, ‘Oh God, we couldn’t possibly be saying that to each other.’ But they are,” she said. “Those [exchanges] are the funnier ones, even though they aren’t punch lines or insults, necessarily. Because they’re just not being honest with each other, really.”

Plus, there’s always the question of Who’s going to be Logan’s Number 1 Boy? constantly floating around in the couples ether, with Shiv now full-throttle vying for the CEO position once eyed by Tom. And yes, we are choosing to use “Number 1 Boy” as a gender-neutral term.

“I think it’s difficult for them: They’re planners, and they’ve had their 10-year plan corrupted by Shiv being offered the CEO-ship. Tom was meant to be, in their plan, maybe heading in that direction and they were going to be supporting him to do that, or at least he was the one inside the business,” she added. “So now she’s got both her husband and her career totally on top of each other in the same trajectory, so it’s trying to navigate those two things together, I think.”

The first three episodes of Succession Season 3 are now streaming on HBO and HBO Max, with new episodes dropping each Sunday night.

Main Image: Matthew McFadyen and Sarah Snook as Tom Wambsgans and Shiv Roy on Season 3 Episode 3 “The Disruption” of Succession. Photo Credit: by Macall B. Polay/HBO.