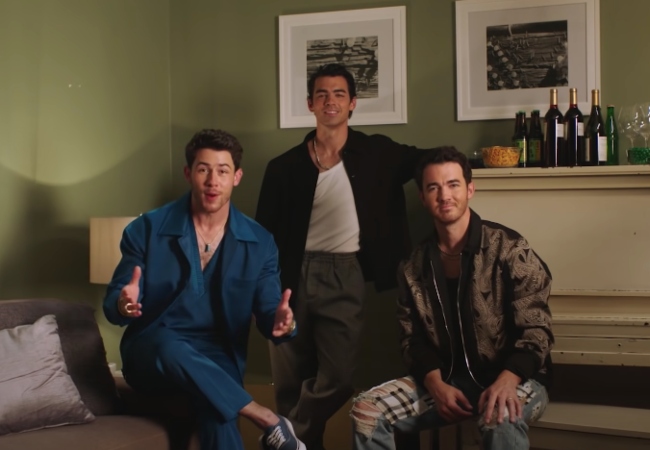 Kendall Roy’s rage-induced donut-smashing that you didn’t see on last night’s episode of Succession; the Jonas Brothers are about to get roasted; production has been suspended on Alec Baldwin’s Rust as the investigation into Halyna Hutchins’ death continues. All in today’s Movie News Rundown.

Succession Donuts: Remember the box of donuts that Logan sends to his children while they’re having a meeting behind his back on last night’s episode of Succession? You know, the ones that Connor notes are “perfectly innocent and I’m sure safe to eat” and definitely not poisoned? Well Mark Mylod, who directed Season 3, Episode 2 of my favorite show on TV, tells MovieMaker that in a deleted scene, Kendall “absolutely trashed” that box of donuts in a fit of rage. Sadly, that moment wasn’t used in the actual episode, but it’s a nice visual to brighten up your Monday.

More Succession, Anyone?: You know Hotel Clio, where Logan goes to hide out in Sarajevo while the dust from Kendall’s bombshell press conference settles? Yeah, it’s not real. Succession executive producer Scott Ferguson gave us the scoop on the inconspicuous New York state location where those scenes were filmed — and what VFX tricks they used to make it look like the Balkans.

Rust Suspended: Production on Rust has been suspended until the investigation into Halyna Hutchins’ death is finished, Variety reports. The director of photography was killed as a result of a gun handled by the film’s star and producer, Alec Baldwin, which he discharged while rehearsing a scene on set after being told the gun was “cold” or unloaded. Variety has more info from the affidavit here.

Dune Box Office: Dune scored $40.1 million at the U.S. box office during its opening weekend and another $180 million internationally, bringing its global total to $220 million, according to Variety — all while also streaming on HBO Max, making it Warner Bros.’ most successful simultaneous streaming and theatrical release so far. But did it earn enough to warrant a sequel? That remains to be seen, Variety notes.

Jonas Brothers Roast: Our beloved pop icons The Jonas Brothers are going to have their own family roast on Netflix! But it won’t be like Jeff Ross’s Comedy Central roasts — this one sounds like it’ll be much tamer, with sketches, songs, games, and special guests including Pete Davidson, Niall Horan, Gabriel “Fluffy” Iglesias, John Legend, Lilly Singh, and Jack Whitehall. Premiering Nov. 23 on Netflix, watch the JoBros’ adorable announcement below:

Cinejoy: Tickets and passes are now on sale for Cinejoy, an online experience featuring a whole bunch of film screenings and live interactive events on Creatics’ unique platform designed for discovery and engagement. Cinejoy, featuring the artists and films of Cinequest, will run from November 4-14.

Please Read This: Vulture did a deeply hilarious play-by-play of the epic vampire-werewolf battle in the final Twilight film, The Twilight Saga: Breaking Dawn – Part 2. Writers Rebecca Alter and Wolfgang Ruth contend that this scene is “better than anything Marvel has ever done,” and honestly, I would choose the Twilight saga over Marvel any day. It’s so bad it’s good, OK?! But seriously, I won’t vouch for the latter four films, but the first Twilight movie is a work of cinematic art and I will die on that hill.

Before You Go: Here’s the epic vampire battle in question, in which Bella and Edward send their young half-human-half-vampire daughter fleeing for safety on the back of a werewolf just before the Volturi wage war in order to end Renesmee’s very existence. If Michael Sheen’s eyes don’t make you laugh, I don’t know what will.