Unspoken Invitation: In Stéphane Brizé’s A Woman’s Life, The End of Innocence is Timeless

Victims of social structures that dilute their idealized notions of reality, the characters in director Stéphane Brizé’s humanistic dramas are often entrapped by undeserved circumstances and hardships that arduously test their moral standards.

Brizé’s 2015 film The Measure of a Man observed a series of frustrating struggles faced by a middle-aged unemployed man, played by Vincent Lindon, whose goal is to find a productive place within modern French society. The role earned Lindon the Cannes Best Actor Award as well as the César in the same category.

Brizé’s most recent portrait, A Woman’s Life, based on the 19th century novel by Guy Maupassant, expands on his thematic interests, even if it might superficially appear as a departure. COLCOA, the premier festival devoted to bringing French cinema to Los Angeles, screened this new film, as well as 2005’s Not Here to Be Loved, also starring Lindon, as part of the Focus on a Filmmaker section, dedicated to Brizé’s work this year.

During his time at the festival, Brizé’ spoke with MovieMaker—on his own terms but with buoyant disposition. His English is proficient but, probably motivated by previous experiences, he prefers to communicate with the press via an interpreter to avoid misunderstandings in his answers. Yet, occasionally, he bypasses the middleman, and speaks directly in perfectly understandable English. Once seated, the conversation flowed regardless of language intermingling.

In the transition between his two most recent films, Brizé not only switched gears regarding the gender and social status of his protagonists, but also traveled back more than a century to adapt the period piece at hand. Ignoring the evident divide between the subjects in The Measure of a Man and A Woman’s Life, he agreed that on screen, the two tales, one about a working-class man in the present and the other centered on a woman from a wealthy family in the 1800s, were linked by profound similarities.

“Even though they are different characters, different genders, and in different periods, both of them have within them very high ideals of humankind. The way it resonates with our actual period is that in both films the subject is the end of innocence, the end of illusions. I think this feeling of the end of illusion is very characteristic about how we feel nowadays,” Brizé explains. If forced to find the defining aspect that separates their experiences, Brizé notes that while neither of their lives is more difficult or more important than the other in his films, “for a woman the difficulty is more her ability to be honest, and for the man it is the ability to lie.”

Judith Chemla and Swann Arlaud in A Woman’s Life. Photograph by Michael Crotto

In A Woman’s Life, Jeanne (Judith Chemla), is married to a deceitful man who gains status through her family and who slowly drains her of her individuality. She wishes to uphold their bond and accepts to endure his apathy. Ultimately, when faced with betrayal, the power of speaking the truth is tamed by the consequences it would be bring about, and Jeanne battles with the idea of exposing the truth or remain suffering in silence. Her moral compass is sturdy until a secret close to home coerces her to see that people are more flawed than they make visible. It’s in that heartbreaking and timeless realization that Brizé found an entry point to connect with the character despite not being a woman living over 100 years ago in a broken marriage reigned by outside interests.

“The first time I read the book was about 20 years ago and there was a feeling of kinship with the character of Jeanne. The difficulty of parting with the illusion of childhood and the imagined paradise that you had in childhood, I share that with her,” adds the director, whose coping mechanism has allowed him not to fall into the despair that the protagonists in this character study descends into. “I succeeded at building defenses and was able to let go of this hope of childhood, and even though Jeanne on her side doesn’t know how to move on from that, I feel a [bond] with her character because this is not a story about the condition of women in the 19th century. That’s why I was interested in it, because it’s actually way more timeless and way more universal as a subject.”

Judith Chemla in A Woman’s Life. Photograph by Michael Crotto

By imposing the hyperrealist shooting style used in his previous feature on a subtle costume drama, Brizé morphs what could have been a stoic and traditional narrative into a tale that’s much more immediate and accessible. The camera roams the world rather than statically capturing what’s in front of it, which is how the moviemaker connects with the fictional entities he is bringing to life. “Without The Measure of a Man I wouldn’t have been able to direct A Woman’s Life. I wouldn’t have been able to direct it in terms of the mise-en–scene, but I also wouldn’t have been able to even write it because the visual approach is a central part of the character inside the narrative. The camera takes the point of view as in a documentary because every time I position myself in both films is as if the character invited me to film his or her own life. In my dramatic approach of the story I make sure that I always take that point of view. Now I never say, ‘We are going to do that,’ or, ‘We are going to see that’ beforehand. We instead discover everything all the time as we film,” he confirms about being subconsciously summoned by material itself.

The sense of witnessing a story that is not preaching on the perils of a bygone era, but instead correlating them with core emotions that don’t go out of fashion, results from this dynamic relationship between the subject and the camera. “We follow his or her life. This gives us a feeling of the time that is passing, but clearly the position of the camera and the dramatic approach in A Woman’s Life makes it feel modern or contemporary. I take this very contemporary approach and yet I used this older format of a period piece. In a way, I am a creating a thread between the periods, which is as well the point of the film since it covers a span of 30 years.” Jeanne’s tremulous Via Crucis of disappointments, unreciprocated self-less love, and devastating tragedies earns its poignancy from the slow simmering suffering depicted via a non-linear structure. 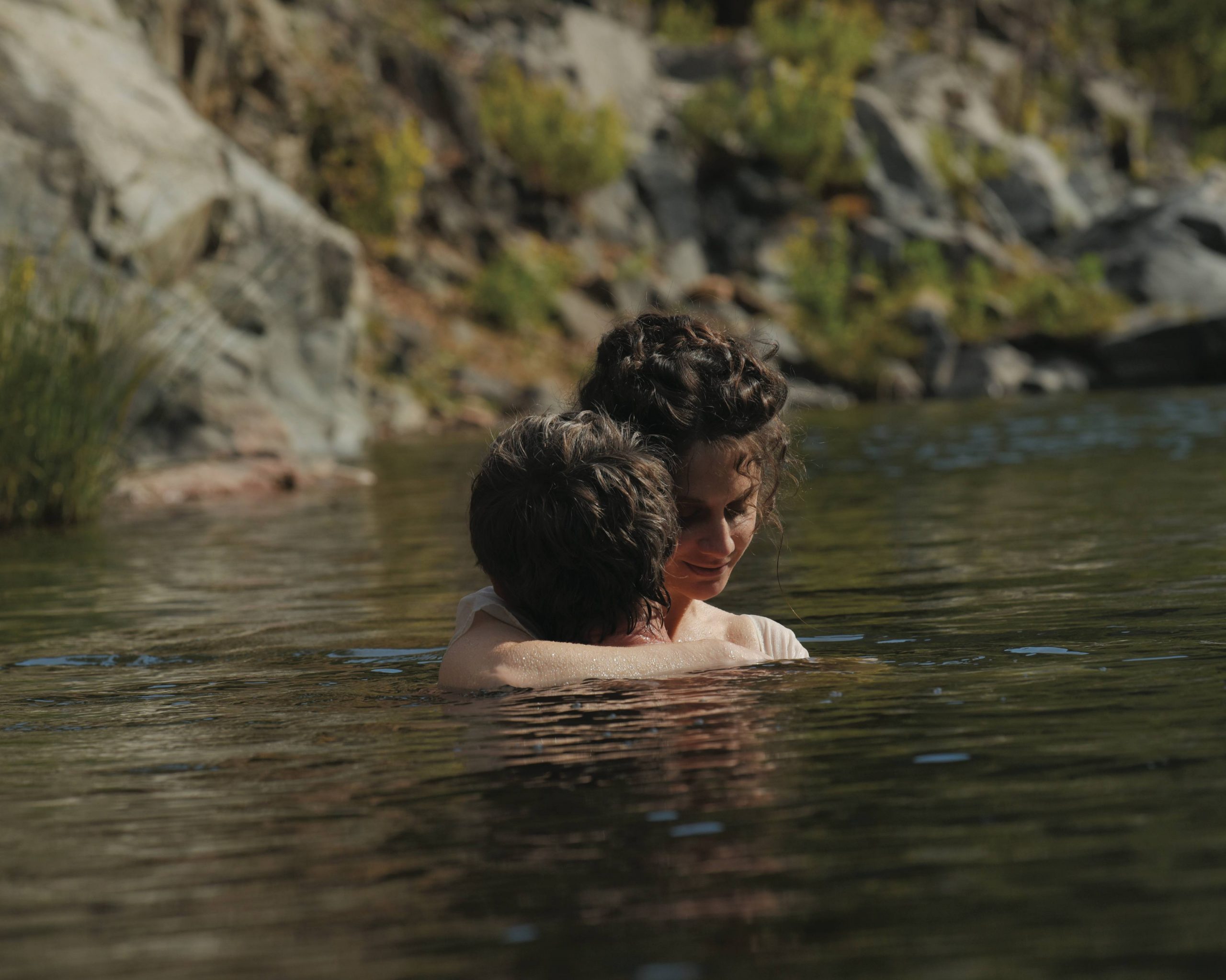 Judith Chemla and Swann Arlaud in A Woman’s Life. Photograph by Michael Crotto

“The greatest challenge in this film was about how to translate time passing,” Brizé continues. “Maupassant went about it in a chronological order, but the tools of a writer are very different from the tools of a director. The challenge is to translate the same sensation in an organic way. What is amazing is that using the elliptic tool, going from one period of time to another all the time—which is the exact opposite the way Maupassant goes about it being chronological, and we keep jumping from one time to another—that is how you end up translating vertigo, the time passing by.”

Intercutting Jeanne’s hopeful and sun-drenched days with the gloom of her anxiety across different parts of her life is a resource that cinema provides for the auteur who seeks not to be bound by preexisting time templates. “The ellipse is, by definition, non-time, and it is in this non-time that we squeezed so much time, which basically proves that the author and the director use extremely different tools to end up telling the same story. It was incredible to discover that physically as I was making this film.” Adaptation is synonym with transformation in Brizé’s hands, a creator eliciting new significance from classic literature.

Gracing the film’s pages-turned-images as Jeanne Le Perthuis des Vauds, up-and-coming actress Judith Chemla steps into the shoes of a fragile lead that is poisoned with bitterness and mistrust from each of the blows she absorbs throughout her ill-fated life. Her work in A Woman’s Life received much acclaim and a César nomination.

For Brizé, Judith and Jeanne share a similar worldview that allowed Chemla to convey more than what is in the novel. “The greatest actresses have the ability to reveal in a character what is not written down. My way to approach fiction is always as if I was making a documentary on the actors, so it is important that the actors I’m working with have a real rapport with the character that is written down. I film the rapport they have with these characters’ world. Judith’s way of looking at he world is very much related to the way Jeanne, the character, has to look at the world,” confirms the celebrated COLCOA favorite. Notable among the other cast members is Finnegan Oldfield, the young English-French thespian who embodies Jeanne’s misguided son at age 20, and who has also been seen in films such as Bonello’s Nocturama and Quillévéré’s Heal the Living.

From what he shares, one could assume that Stéphane Brizé’s has figured out how to embed his signature naturalism even underneath the constraints of lavish dresses and antique decor—but there is one hurdle even he can’t get around. “The difference is only one word: waiting. You wait for the costumes. You wait for the hairdresser. All the time you are waiting for somebody in a period film. But once everything is on the set, it’s the same,” the director candidly recalls before going off to mingle with guests—most of whom, at this reception hosted by the French consul, are familiar with his work. In a moviemaker’s life, there are times for intense introspection, and others for simply enjoying being a guest of honor. MM

A Woman’s Life opens in New York on May 5, 2017 and in Los Angeles on May 12, 2017, courtesy of Kino Lorber. Featured image: Judith Chemla and Yolande Moreau in A Woman’s Life, photograph by Michael Crotto.

The Magnificent Anderson: Tour the Weird Wonder of Wes Anderson’s World With These Supercuts (Video)
Fake It To Make It: Watch How Orson Welles’ F For Fake Rewrote the Rules on Editing Structure (Video)