Kristen Stewart looks strikingly like Princess Diana in the new trailer for the Pablo Larrain film Spencer, which follows the “people’s princess” as her marriage to Prince Charles crumbles.

She speaks just one line of dialogue in the trailer, when she is told, “They know everything.”

“They don’t,” replies Diana, in a bit of meta commentary: She’s talking about whoever the characters are talking about, and also all of us, who have heard the Lady Diana story many times before — in tabloids, in her memoir, and most recently in Netflix’s The Crown.

The trailer, with gauzy, romantic majesty, gives us all the Princess Diana highlights — the clothes, the dancing around the palace, the beauty — with a sense of melancholy that matched that of the real-life, lonely Diana Spencer, her name before the fairytale wedding to Prince Charles that never lived up to its promise.

The film is set in 1991, six years before Diana died in a horrific car wreck while being hounded by paparazzi in Paris. A summary from Neon, which is releasing the film, describes it as follows:

December, 1991: The Prince and Princess of Wales’ marriage has long since grown cold. Though rumours of affairs and a divorce abound, peace is ordained for the Christmas festivities at Sandringham Estate. There’s eating and drinking, shooting and hunting. Diana knows the game. This year, things will be a whole lot different.

The film is directed by Pablo Larraín, who similarly offered a look at the life of Jacqueline Kennedy, played by Natalie Portman, in Jackie. Spencer is written by Steven Knight (Locke, Peaky Blinders, and an Academy Award nominee for Dirty Pretty Things).

Here is the poster for Spencer: 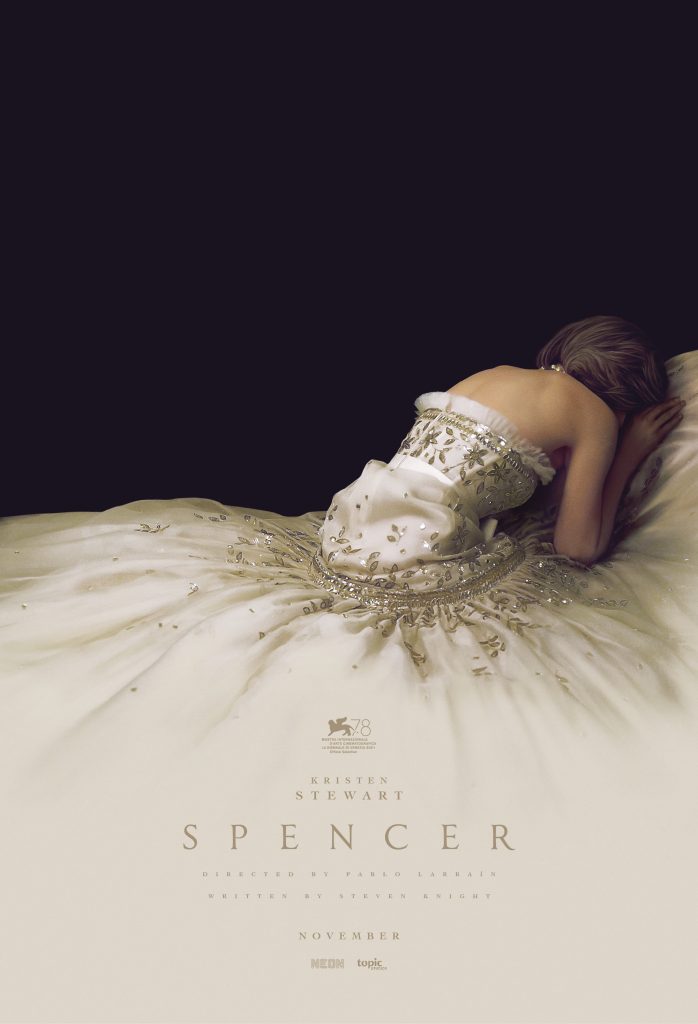 Spencer, starring Kristen Stewart and directed by Pablo Larraín, will be released November 5 by Neon.