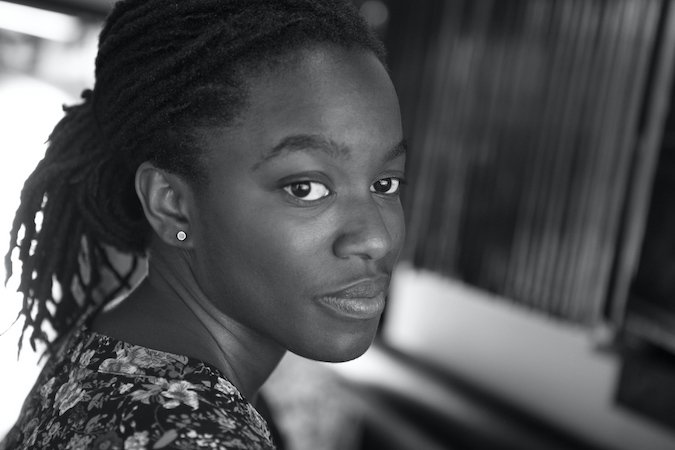 Shatara Michelle Ford remembers sitting in the audience of the 2019 New Orleans Film Festival, waiting to see if her film, Test Pattern, would win the Best Narrative Feature Jury Award. She listened as the presenter described the winning film — not realizing, at first, that it was her own. She burst into tears.

“I was so used to people not understanding or caring, I couldn’t recognize my own film,” she explains.

New Orleans felt like the first sign for Ford that her film resonated with a diverse audience, an outcome she never expected. Test Pattern is the story of a Black woman and her white boyfriend, driving across Texas in search of a rape kit after she is sexually assaulted. Until she wrote and directed it, Ford says, “I was trying to follow everybody else’s rules. And that simply wasn’t working.”

Growing up in rural Arkansas and Missouri, she had devoted hours to analyzing the Coen brothers’ screenplays. Her obsession with film (“I was probably watching two movies a day for the first 16 years of my life”) and MTV’s Making the Video fostered a desire to direct.

“I’ve always loved movies, but never thought I could make them,” she says. “I thought that’s something straight men do, who were probably white.”

After graduating from Pitzer College in 2009, Ford enrolled in the screenwriting MFA program at Royal Holloway, University of London, where she hoped to channel her experiences as Black woman into her art. Seeing Dee Rees speak in London after a screening of her film Pariah made her realize: “This is what I’m actually supposed to be doing.”

But she felt misunderstood in the MFA program, where she says professors and colleagues took issue with her penchant for writing Black female protagonists when race wasn’t the focus of the story. 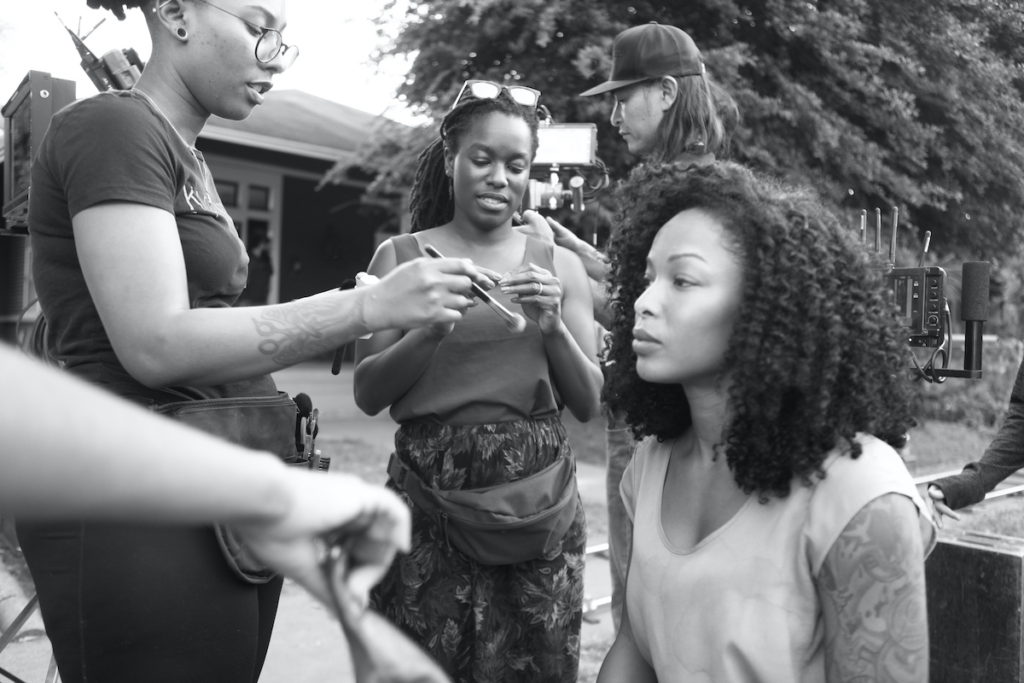 Shatara Michelle Ford (C) on the set of Test Pattern.

“No one could give me notes because they didn’t understand or they weren’t open-minded to the fact there are other realms of experience that a Black person could have,” she says, adding that one professor told her, “If you’re going to write about Black people, you should really think about the movie Precious that just came out.”

She began experimenting with racial ambiguity. One script, to everyone’s dismay, didn’t reveal a character’s race until page 46.

“There’s a way that good screenplays, useful screenplays, should be written for any director to go on it. My scripts didn’t really work that way,” she says, laughing. She was criticized for writing scripts that didn’t put everything on the page.

“Maybe because I was always writing for myself and I didn’t know,” she muses. “I always want some space in a script — do you see why I sound like a director?”

Ford wrote Queen Elizabeth, a screenplay about a Black college graduate struggling to find her place in a post-recession world. “Everyone likes the script. I cannot get it made,” she recalls. One sticking point was that she wanted to direct. “I had an executive say to me directly, ‘You don’t have heat. No one cares about you.’”

“I just couldn’t get anybody to take me seriously because I’ve never done anything before,” she says. “Well, how do you expect me to do anything if you’re not going to give me a chance? I don’t have money, no one invests in shorts and pipelines are difficult and nebulous.”

In 2016, she worked as director James Gray’s assistant on The Lost City of Z. After shooting wrapped, she flew home and immediately got to work writing and directing “Afro Woman: 2016 CE,” the first in a series of four experimental shorts “starring Black women with little to no dialogue.” When funding for the other three fell through, she shot a Hitchcock-inspired music video on her own dime.

Through the projects, she also became part of a network of “rad, queer women and POC,” many of whom collaborated on Test Pattern. Still, “real institutional, foundational support” failed to materialize, even after Queen Elizabeth made the Black List, the annual survey of executives’ favorite unproduced scripts. Executives continued to balk at the idea of letting an unknown director handle her own project.

“At that point, Moonlight had come out and Barry Jenkins was talking about that eight-year drought he had,” Ford recalls. Rees’ film Mudbound “had also reverberated a bit, but there was also this narrative that it took Dee Rees a long time to make something after Pariah.”

She continues: “I was starting to connect the dots. I thought, I’m not waiting. I can’t do that.”

It was late 2017. “The world was getting darker, a little bit more serious.” She remembers thinking: “I do have something to say and I don’t want to waste time.” 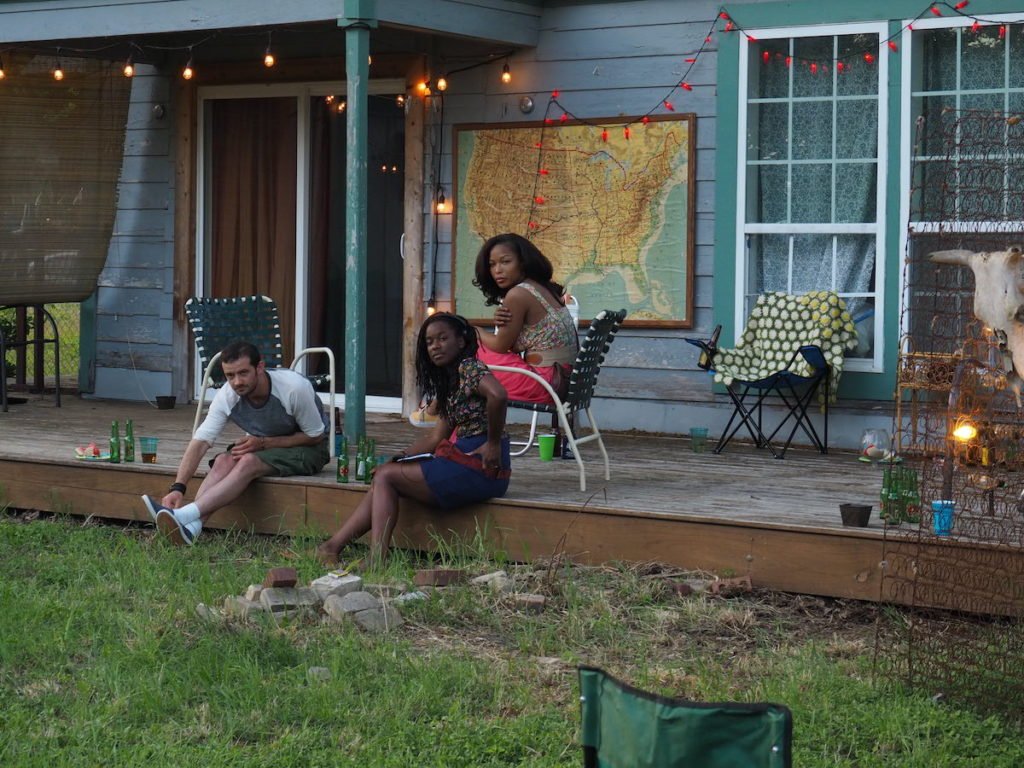 Will Brill, Shatara Michelle Ford, and Brittany S. Hall on the set of Test Pattern. Photos courtesy of Kino Lorber

After four years of struggling to break in, she and her producing partner, Pin-Chun Liu, took out loans and “something like 16 credit cards” to supplement $150,000 they had raised from an executive producer and industry friends. Everyone advised against the financial gamble, but Ford was undeterred.

“Just because we all do something a certain way doesn’t mean we have to keep doing it, especially if it’s oppressive or exclusive,” she says. “I’m not going to let people tell me that that’s not how it works. Because how it works was designed to not include me.”

She had first learned about the issues that many sexual assault survivors face accessing rape kits in a 2016 episode of Full Frontal with Samantha Bee. She believed she could use the problem to interrogate intersectional oppression.

“We all have relative levels of privilege, but we also have compound oppression. So for some people, the experience is just going to be more difficult, more nebulous, more painful,” Ford adds.

She focused on Austin to “hammer home that there are actual policy reasons” that places like Texas were dangerous for her protagonist, Renesha (Brittany S. Hall). References to Sandra Bland, a Black woman who died in police custody in Texas in 2015, anchor the story in a precise cultural moment.

The Test Pattern dialogue is tense between Renesha and her boyfriend, Evan (Will Brill). But tension also crackles in silent rides to hospitals and the ticking of clocks. Ford says removing words from her already sparse 35-page script added emotional honesty.

“As someone who’s felt like an outsider, and spent a lot of time observing people, the quieter moments tell you a lot. So much of trauma is about how we process in the moment, if we process at all.” Inspired by the films of Mike Leigh, she encouraged her actors to use structured improvisation in long, spacious takes.

Also read: How Vanessa Kirby Breaking Her Ankle Altered Her The World to Come Performance

“The way that it’s constructed is intentional; we’re supposed to be reflecting on our own behaviors and experiences,” she says. “We were all upset all the time. … On top of making an indie film, I knew it was asking a lot of people to hold that for a long time.” 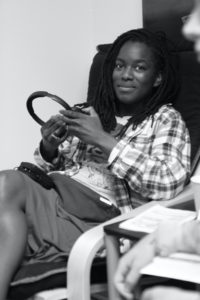 Just as TV test patterns once helped analog viewers adjust their receivers, Test Pattern is designed to help audiences process information and ideas. It succeeded with test audiences who fervently debated white privilege, failures to stop sexual assault, and other issues the film raises. The film scored important wins at the BlackStar Film Festival, where it premiered in August 2019, and in New Orleans in October. But it didn’t sell.

Then George Floyd’s death in May moved the Black Lives Matter movement to the center of the national dialogue. Suddenly, test screening attendees and friends started texting Ford that they were thinking about her movie again. “That made Pin-Chun and I think, ‘Oh shit, maybe we need to go email some people, maybe we need to figure out how to get this movie distributed.’”

She adds: “In this pandemic, this racial uprising, this fascist moment that we’re in, we need to be looking at all of the systems,” she says. “There are structural issues that are keeping experiences and voices and perspectives from being heard, and not just heard, but received.”

In September, Kino Lorber announced plans to release Test Pattern in early 2021. It seemed that someone on the inside was finally listening. “If nobody was thinking that way, my film would still be sitting on Vimeo,” says Ford. “And no one would see it. And I wouldn’t have a career.”

“I’m glad to not have to lift this heavy load alone anymore.”

Who Was Jack Unterweger, the Austrian Serial Killer in Netflix’s Vanishing at the Cecil Hotel?
Regina King to Play Shirley Chisholm in Shirley, About Presidential Run of First Black Congresswoman