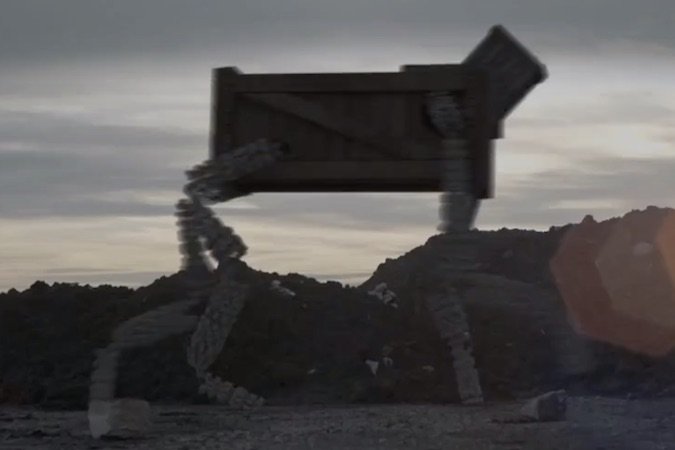 Shane Carruth just used the Twitter account for his 2013 film Upstream Color to share a mock-up trailer for his long-planned but never-made film A Topiary, though the video likely won’t be available long.

“This will probably get taken down because I lifted a bunch of shots from films,” the account tweeted, sharing a link on Vimeo. I’d recommend just watching it, with no context, but some context is below when you’re ready — or if the video has been deleted by the time you read this.

Shane Carruth has been more visible lately because he is executive producing Nicholas Ashe Bateman’s The Wanting Mare, an ambitious, low-budget fantasy film that premiered this weekend at the online Chatanooga Film Festival.

In recent interviews, he’s expressed his disillusion with Hollywood, telling Indiewire: “I’ve got one last project in front of me. I shouldn’t say anything about it. I’m still defining the edges. But that is it for me. I’m not going to say I’m doing a project and then hope Paramount gives me a deal or whatever the hell. I’m not doing that anymore.”

But then he released the A Topiary trailer mockup, which was uploaded nine years ago but had been kept, until now, in private mode.

Does this suggest new life for the project? That Carruth feels he has nothing left to lose? Something else? We don’t know.

A Wired feature in 2013 includes a great history of A Topiary, which Carruth spent years on, living off the money from his acclaimed 2004 debut, Primer. He used a 3-D computer program to design all the creatures in the film himself, he told Wired, which describes A Topiary as “a tale told in two parts: The opening section follows a city worker who becomes obsessed with a recurring starburst pattern he sees hidden everywhere around him, even in traffic grids,” which leads him to join with other believers.

The second half of the film is about a group of young boys who discover “a strange machine that produces small funnels, which in turn can be used to build increasingly agile robotlike creatures,” Wired wrote. This leads to conflicts between the boys, and others.

You’ll have lots of fun spotting the films Carruth spliced together to create the conceptual trailer for A Topiary. It’s accompanied by Hans Zimmer’s gorgeous score for Inception, and it feels, to me, beautiful and disorienting and tragic, like 2013’s Upstream Color.

I’ll describe the A Topiary video as well as I can, since the video may soon be taken down.

It begins with shots of the universe and earth. A child’s voice explains: “It had always been around, always hidden, in glints of sunlight, hidden in the shape of bone. Until after a while, someone notices, and then he can’t stop noticing.”

Crowd scenes as the voice continues: “How many cars come through here? How many people? What about that direction?” followed by overlapping, hard-to-transcribe questions I interpret as “How many birds perch here?” and “Is the lightning speaking?”

Finally we hear the very clear question: “Is there information in the rain?”

“Then the fighting, the quarreling, then who owns what.”

Cue Sam Shepherd with a gun in Days of Heaven.

“Until the great machine is stolen, buried. By the time the boys get ahold of it, there’s not much less to do but turn it on. And out comes everything.”

Now we see machines that move like they’re alive.

“All the pieces they need to create things that move like animals, like creatures, or robots, but not.”

They run and spin, frightening and gorgeous.

“And being boys,” the voiceover continues, “they can’t help but think of something they’ve been given as something that they’ve earned.”

It announces Steven Soderbergh and David Fincher as executive producers. Both were early backers of the film.

The voice concludes: “When the men come looking for their belongings, they may not recognize them anymore.”

Thank you to Jake Bowen, with whom we’re working on StudioFest’s Demystified web series, for bringing this to our attention with a detailed and passionate late-night email. This is the kind of excitement the trailer created — and the film could create too, if anyone would let Carruth make it.

A Topiary, by Shane Carruth, is not and may never be in theaters.