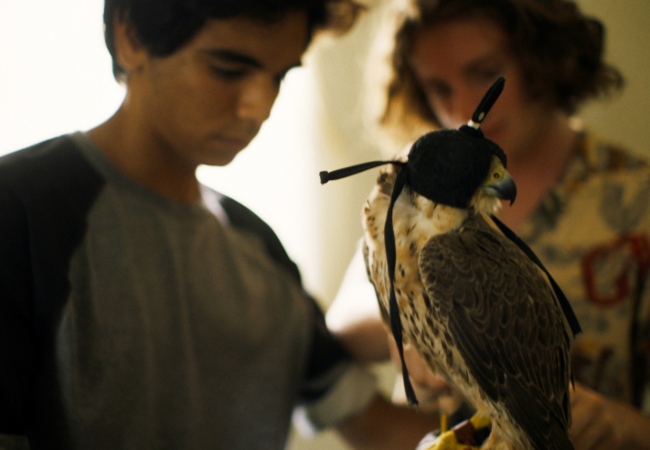 The falcon that was originally slated to star in Seanne Winslow’s The Falconer flew away just days before filming began. So Winslow and her crew had to find a new falcon to star in the movie — and train it in real-time during production.

“Two days before we started shooting in Oman, we had a falcon that was coming to set. She was going to star in our movie, she was coming from Dubai, and the falconer’s brother took her out to play with her and she was like, I don’t respect you, and she booked it and fully, like, flew away, never to return,” Winslow said in a post-screening Q&A at SCAD Savannah Film Festival.

“So we started shooting The Falconer without a falcon.”

The Falconer, which was co-written and co-directed by Winslow and Adam Sjoberg, was shot in Oman, an Arabic-speaking country on the southeastern coast of the Arabian peninsula sandwiched between Yemen and the United Arab Emirates. Winslow said it’s the first-ever feature film to be shot entirely in Oman. Based on a true story, the film follows two best friends who work at a local zoo together, Tariq (Rami Zahar), the son of a poor beekeeper, and Cai (Rupert Fennessy), a privileged Westerner. When Tariq’s sister Alia (Noor Al-Huda) tries to escape her abusive marriage, Tariq and Cai begin stealing animals — including a falcon named Ameera — from the zoo with plans to sell them in order to help pay for Alia’s divorce.

But real-life falconry isn’t as easy as the characters make it look in the movie.

“Falconry is not like training a dog or a horse where you’re the master. In falconry, you’re an equal to the falcon, and the falcon will only come to you if they respect you,” Winslow said.

Lucky for her, she had the real-life Cai, wildlife conservationist and trained falconer Tarim Contin-Kennedy, on set. Having trained 86 falcons in his day, he was able to procure them a new falcon and train it on set much like the characters train it in the movie.

“He [Kennedy] befriends some bedouins and we buy this wild falcon off of these bedouins and we start training it on set,” Winslow recalled. (Bedouin is a term for a desert-dwelling nomadic group.) “One of the advantages with the actors was they really got to be a part of that process of training that falcon, so that trust that they’re building with Ameera is the trust that Tarim is building — the real-life Cai is building — with Ameera. And that moment actually in the movie when she flies to the glove the first time, that was the first time that she’d flown that far for us. I’m so proud of our actors… they stayed in full character in that moment, but they’re like full-on freaking out like, ‘Oh my gosh, that just worked!'”

Oh, and here’s some good news to leave you with: the falcon who stars as Ameera was released back into the wild in 2019.